A petrol station worker has revealed the final words of an ‘exhausted’ couple killed in a horror crash that left their three young children stranded next to their bodies for two days.

The Christmas Day tragedy, 10km from their destination, stranded their three children, aged five, two and one, in the mangled wreckage until they were found 55 hours later.

The five-year-old girl has been hailed a hero for saving the lives of her younger brothers as they waited inside the wreckage before help eventually arrived.

Nathan O’Donnell was one of the last people to see the couple alive when they pulled into the Dunnings service station at Northam at 1.11am on Christmas Day. 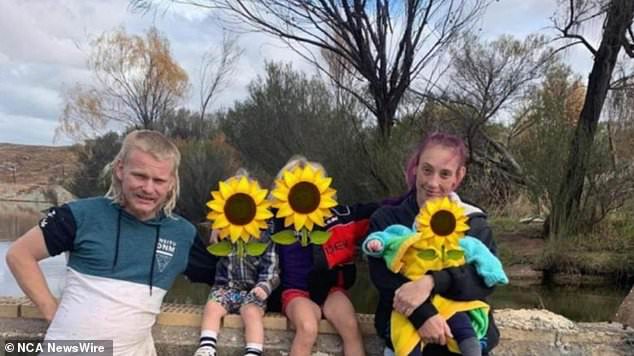 He vividly remembers the family as they were among the few customers he served that morning.

‘I served them when they came to get fuel. They were polite. Sadly I was the last one to see them before this sad accident,’ he commented online.

Mr O’Donnell recalled his conversation with Mr Day as he paid for fuel, drinks and snacks for the long journey ahead.

‘They got out, put fuel in, then they came in, they went to the toilet, they came and bought drinks and snacks and stuff for the road,’ he told the ABC.

‘He told me he was heading to Kondinin and that it was a couple of hour’s drive.

‘He didn’t buy a coffee. Then he left, I told him good luck with the long drive.

‘Unfortunately, he never made it.’ 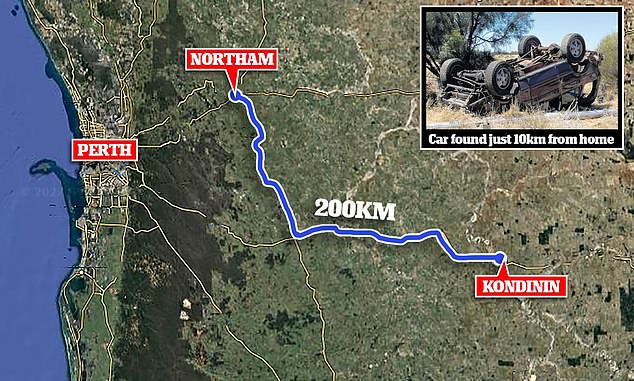 The family had left Northam, WA, at about 1am on Sunday and were heading home to Kondinin, some 200km away

Mr O’Donnell described Mr Day as polite and that the little girl wouldn’t stop looking at him like ‘any kid that age does’.

‘He seemed very exhausted and then he got into the driver’s side,’ Mr O’Donnell told The West Australian.

‘It was quiet so they were memorable. I remember the daughter because from the window she kept staring at me.’

‘I thought that is a fair drive and he said they had to get home,

‘Jake said they had to be home for the morning and unfortunately they never made it. It is pretty sad.’ 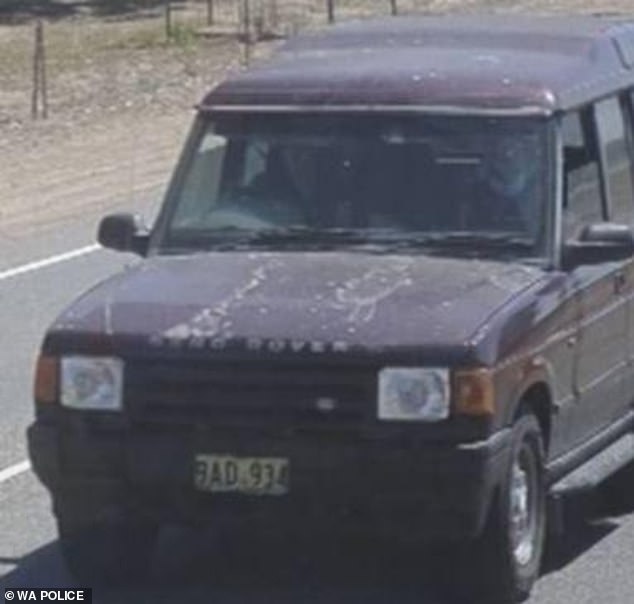 The couple had last been seen when they pulled into a Northam service station shortly after 1am on Christmas Day. Pictured is the Land Rover Discovery 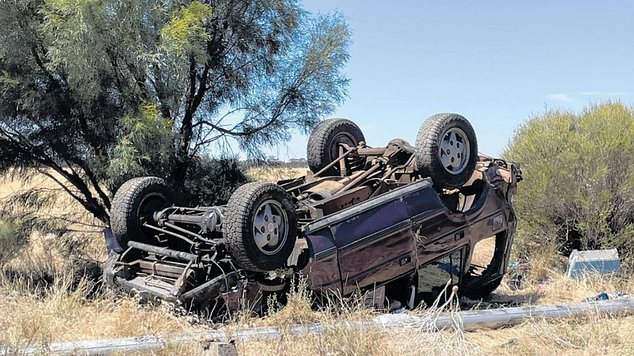 The car was found upside-down in an embankment just 10Km away from the family’s destination on Corrigin-Kondinin Road, just before midday on Tuesday

It comes after relatives of the shattered couple issued a desperate plea for Australians to take care on the roads.

‘Know what your body limit is,’ Michael Read, who is a cousin to one of the parents, told the ABC.

‘Don’t drive tired. If you’re going to want to be somewhere, just stay the night at your family.’

The deceased couple’s five-year-old daughter is now being hailed a hero for saving the life of her two baby brothers.

The little girl was able to free herself and then unclip her one-year-old brother from his car seat.

After a frantic search and public appeal by police, the car was found by close family friends, with the children still inside the wreckage with their dead parents.

Mr Read says without his young niece’s efforts, her baby brother would not have survived. 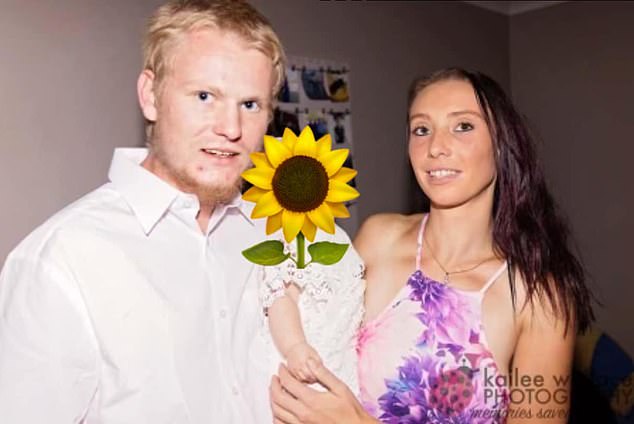 Cindy Braddock, 25, and Jake Day, 28, were killed when their their Land Rover Discovery left a remote WA highway and flipped

‘What I’ve gathered is the five-year-old became unstuck in the vehicle, and she then got the one-year-old out of the car seat, then they were stuck in the car for 55 hours in 30C heat,’ he said.

‘It would have been hard for the three children to be in the car for that whole time. Nobody knows what they went through.

‘And if it wasn’t for the five-year-old undoing the buckle of the one-year old’s car seat, he wouldn’t be with us today.’

‘She’s a legend, she always has been… she’s a strong little girl,’ he told The West, adding that he had also been out searching and was about 10km from the crash scene when the children were found alive.

‘I appreciate the people who were out there helping us look for them. We’ll get through it, we’ve just got to plod along.’

Mr Read said the children are ‘being loved by family, nurses and doctors’ since arriving at the hospital and are all ‘doing fine’.

The extended family are now taking it one step at a time in deciding what is next for the children.

Ms Braddock, Mr Day and their children were reported missing on Christmas Day when they didn’t show up to a family celebration.

Mr Read said the community will be devastated by the loss of the young parents.

An online fundraiser to raise money for the orphaned children has already seen almost $40,000 pledged as organisers issued an update on Wednesday.

‘Thank you everyone for the donations this is going to make a world of a difference in the kids’ lives. They are all doing well and surrounded by family,’ the update read. 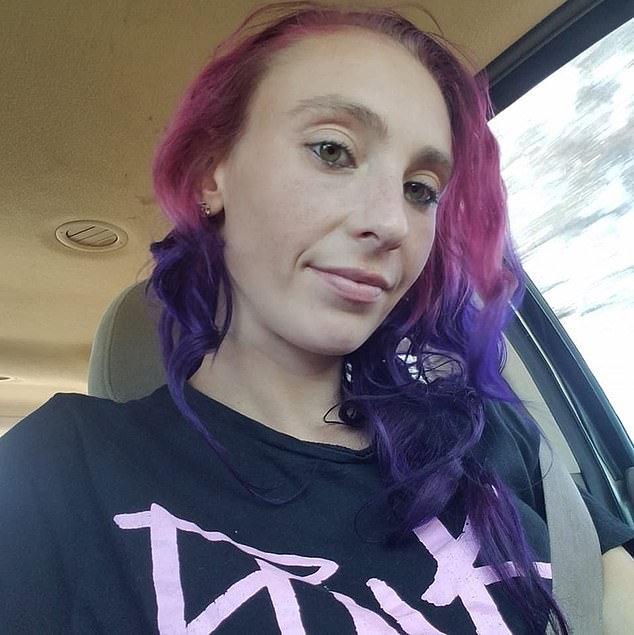 Ms Braddock, Mr Day (pictured) and their children were reported missing on Christmas Day when they didn’t show up to a family celebration

HOW THE CRASH UNFOLDED

1am Sunday: Cindy Braddock, 25, Jake Day, 28, and their three children were driving 200km from Northam to Kondinin

Just 10km away from Kondinin, the family crashed their maroon Land Rover

Just before 12pm on Tuesday: The family’s car is found by a relative 10km away from Kondinin on Corrigin-Kondinin Road