Wacky tube man could keep dingoes from killing cattle in Australia, as the 13-foot tall inflatables scared off nine out of 10 dogs in a recent study

Forget about scarecrows – Australian farmers hoping to save their livestock from dingos might want to borrow a wacky tube man from their local used car dealer.

A new study suggests the humorous figures’ unpredictable gyrations can scare off the legendary wild dogs.

Dingoes are a major problem for Australia’s sheep industry, slaughtering thousands of animals and causing up to $60 million in damages annually.

Animal rights advocates decry shooting or poisoning the creatures, and killing off a parent dingo can lead to more attacks from reckless pups.

So scientists in Adelaide tested out a tube man to keep dingos away from a bowl of dog food.

They were successful 75 percent of the time, with nine of the twelve canines running away in fear.

Dingoes are a major problem for Australia’s sheep industry, slaughtering thousands of animals and causing up to $60 million in damages annually. Researchers believe the unpredictable movements of inflatable tube men could be an effective and nonlethal deterrent

Farmers have tried non-lethal approaches before, including shrill sirens, but the dingos quickly adapt.

And dingoes serve an evolutionary purpose, keeping the number of prey animals, like kangaroos, in check.

So Smith and his colleagues brought ‘Fred-a-Scare,’ a 13-foot skydancer, to a dingo sanctuary in Melbourne and placed him near a bowl of dry dog food. 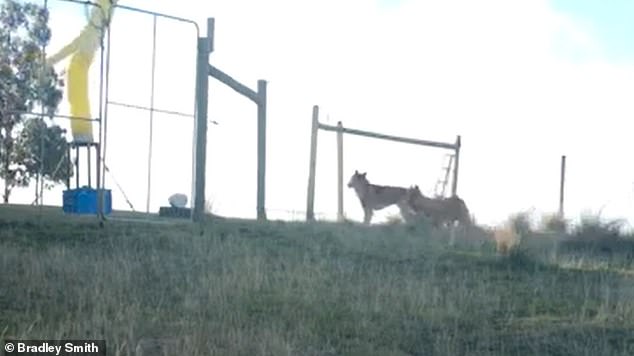 Nine of the twelves dingoes ran away after laying eyes on the tube man, compared with only one that bolted after hearing the sound of gunshots. Over three days, ‘Fred’ scared away the dogs 75 percent of the time

As reported in the journal Pacific Conservation Biology, pairs of hungry dingoes were brought into the yard downhill from the inflatable effigy.

Nine of the twelves dingoes ran away in fear after laying eyes on Fred, compared with only one that bolted after hearing a speaker that played the sound of gunshots.

Over the course of three days, Fred successfully protected the dog food three-quarters of the time.

‘When you have sound, the dingoes will flinch. They’re a bit nervous but they don’t run away,’ Smith said. ‘But the wavy man, boy, they bolted.’

It’s not a fool-proof solution, though. 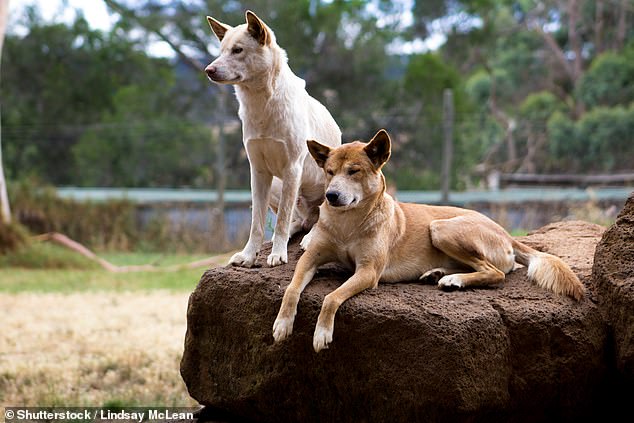 Though dingos are a major nuisance they serve an evolutionary purpose, keeping the numbers of prey animals in check. Farmers have tried nonlethal approaches before but the dogs quickly adapt

Each wind-blown tube man requires about 1000 watts to power, about the same as a dishwasher.

And the dingos could eventually get used to even this weird sight.

But it wouldn’t be the first time someone’s resorted to a mechanical boogeyman to keep an animal nuisance at bay.

Smith was actually inspired to try out Fred after hearing about conservationist Suzanne Stone, who used a wacky tube man to scare off wolves from a ranch in Oregon.

And restaurateurs around the famed Sydney Opera House have employed a mechanical falcon to scare off seagulls that attack tourists and diners.

But a spokesperson for the venue said the imitation bird of prey, which costs about $6,500, hasn’t proven very effective.

In Japan, farmers are protecting their crops from wild boars using robotic wolves that have fangs, fur and red eyes

The two-foot-tall canines howl when another creature approaches them.