The co-owner of a Colorado crane company where the suspect in a deadly weekend shooting at a Nashville Waffle House once worked said she had urged federal officials to keep him in custody after he was arrested at the White House last year.

Travis Reinking, 29, is accused of opening fire Sunday outside a Waffle House with an AR-15 rifle and then storming the restaurant, wearing only a green jacket. Four people were killed and four others were wounded in the shooting.

But Reinking had exhibited erratic behavior for years before the shooting. Darlene Sustrich, who co-owns a Colorado crane company with her husband Ken, where Reinking once worked for six months, said they got a call from the FBI after he allegedly tried to jump the White House fence last July.

Waffle House shooter Travis Reinking’s former boss says she told FBI agents to try and keep him in custody after he tried to jump the White House fence last year. Reinking is pictured above being taken into custody on Monday 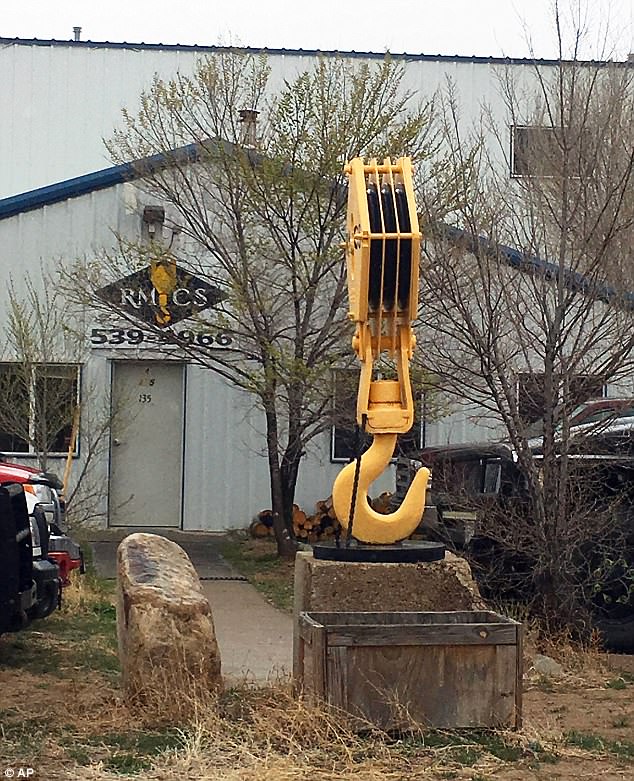 Reinking worked for six months at this Colorado crane company. The co-owners of the company, Ken and Darlene Sustrich, spoke out about his paranoia and delusions

Federal officials did not immediately respond to a request for comment.

The Sustriches also recalled a time Reinking and other members of a crew were returning to Salida after completing a job.  As they passed through the town of Last Chance, Colorado, Reinking quit on the spot.

‘He misconstrued that was his last chance,’ Ken said. ‘He got super-paranoid, and he quit that day. He said, “This is my last chance.”‘

Reinking’s intelligence impressed them. He would sometimes talk about astrophysics, Darlene said.

In his last few days at the crane service, he began showing signs of paranoia.

‘You could see something was off with him, but nothing violent,’ Darlene said.

Ken Sustrich told police that he reached out to Reinking’s father with concerns about his son’s mental health. He said the father replied that he was aware of the issues and ‘had been recently trying to rekindle his relationship with Travis,’ the police report said. 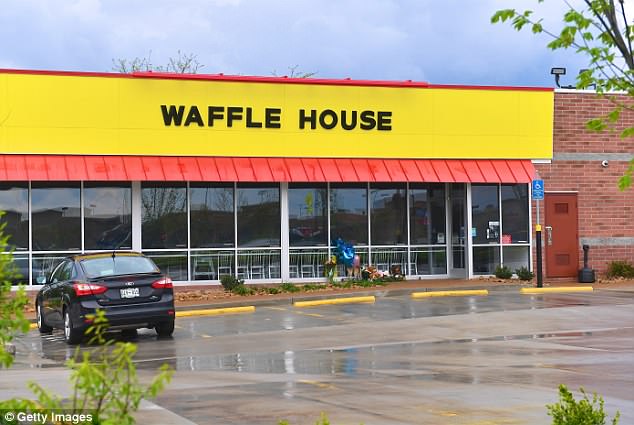 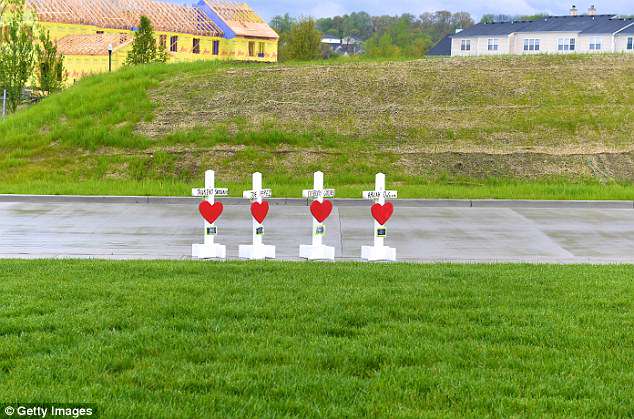 Reinking has been charged with four counts of criminal homicide. And a tweet from the Metro Nashville Police Department said he also faces four counts of attempted murder and one count of unlawful possession in the commission of a violent felony.

Davidson County Sheriff Daron Hall said Tuesday that Reinking has been ‘compliant’ and ‘cooperative’ since he was transferred to the jail late Monday after he was captured near the apartment where he lived.

Reinking is wearing a vest known informally as a ‘suicide smock’ and will remain under close observation at a maximum-security facility in Nashville. It is padded, made from polyester and held together with Velcro.

An attorney listed as Reinking’s lawyer did not immediately respond to an email seeking comment.

Meanwhile, the man who snatched the rifle away from the gunman during the shooting told Tennessee lawmakers Tuesday he faced ‘the true test of a man,’ drawing a standing ovation during his brief address. As the state House hailed him as a hero, James Shaw Jr. said he acted to save his own life early Sunday and saved others in the process.

‘I never thought I’d be in a room with all the eyes on me, but you know, I’m very grateful to be here,’ Shaw told House members. Shaw said he has gone to see some of the shooting victims in the hospital and they all remembered him. He apologized to the people whose loved ones died in the attack. 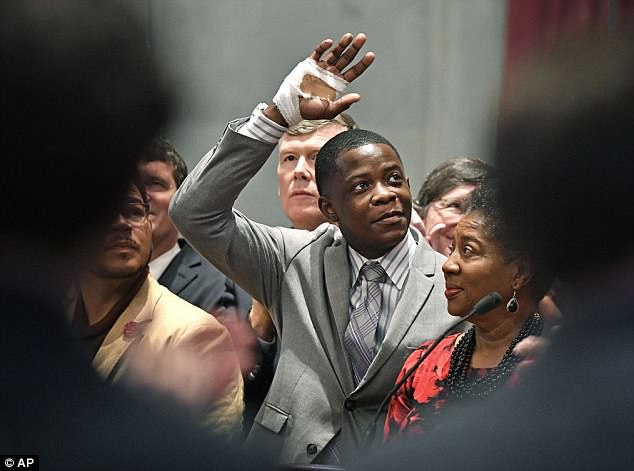 James Shaw Jr., waves to the crowd and legislators inside the Tennessee House chambers as he is honored for disarming Reinking

After the shooting, authorities say Reinking escaped on foot from the restaurant and shed his only item of clothing. By the time he was captured in the woods nearby, police had searched his apartment and found the key fob to a stolen BMW they had recovered in the parking lot days earlier. The BMW theft had not initially been tied to Reinking.

Police seized multiple items from his apartment including: a Remington rifle with a magazine, cartridges for different calibers of guns, two rifle scopes and gun cleaning equipment. Police also found three books on patents in the apartment, along with a sketchbook, two iPhones and a number of pieces of computer equipment, court records show.

Nashville Police Department Lt. Carlos Lara told reporters Reinking was arrested Monday after detectives were tipped to the suspect’s presence by some construction workers. He carried a black backpack with a silver semi-automatic weapon and .45-caliber ammunition.

The arrest ended a 24-hour manhunt involving more than 160 law enforcement officers, but it left troubling unanswered questions about official responses to months of bizarre behavior before the restaurant attack, including encounters with police in Illinois and Colorado and an arrest at the White House that raised red flags.

A former co-worker told a Salida, Colorado, police detective Reinking was infatuated with singer Taylor Swift and claimed to be a sovereign citizen. 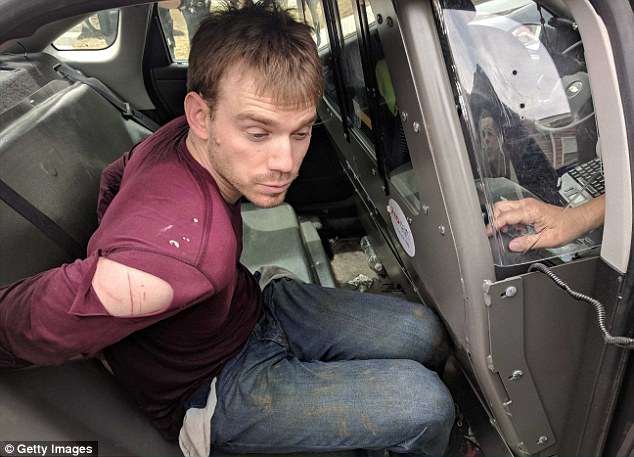 In this photo released by the Metro Nashville Police Department, Travis Reinking sits in a police car after being arrested in Nashville on Monday

Last July, Reinking was arrested by the U.S. Secret Service after he entered a restricted area near the White House and refused to leave, saying he wanted to meet President Donald Trump. The suspect told Washington, D.C., police he was a sovereign citizen and had a right to inspect the grounds, according to an incident report.

Reinking was not armed at the time, but at the FBI’s request, Illinois police revoked his state firearms card. Four guns, including the AR-15 used in the shootings, were transferred to his father, a procedure allowed under Illinois law.

Tazewell County Sheriff Robert Huston said Jeffrey Reinking pledged he would ‘keep the weapons secure and out of the possession of Travis.’ Don Aaron, a Nashville Police spokesman, said Reinking’s father ‘has now acknowledged giving them back’ to his son.

Phone calls to a number listed for the father went unanswered.