Nadia Bartel has been hit with a $1100 fine after being busted driving with a suspended licence.

The former WAG-turned-fashion designer, 36, was forced to front a Melbourne court on Wednesday after being charged with driving while suspended and failing to update her contact details with the driving authority.

Bartel had been pulled over in her Range Rover by police on Dandenong Road at Windsor, just southeast of the CBD, on August 25 last year.

It had been just days after she had been filmed snorting white powder off a cheap K-mart plate during one of Melbourne’s six Covid lockdowns that year.

Why the long face? Former WAG-turned-fashion designer Nadia Bartel looked downcast as she grabbed a takeaway coffee in Melbourne on Wednesday 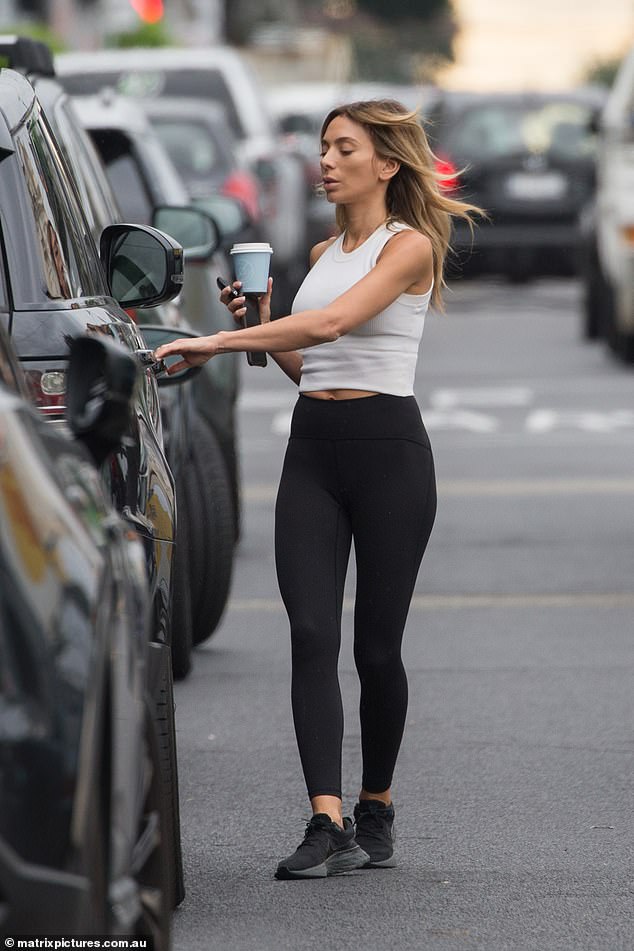 The court heard Bartel pleaded ignorance when questioned on the night by police, telling the officer she had relocated in 2010 and hadn’t been aware of the suspension.

The businesswoman and ex-wife of AFL player Jimmy Bartel was represented in court by Sarah Pratt – an equally glamorous Melbourne criminal lawyer.

Bartel’s licence had been suspended for three months on July 17 after she racked-up too many demerit points.

The fashionista – who had breached lockdown laws with her embarrassing powder-sniffing scandal – was not supposed to be back on the roads until September – the very month she was fined $5452 for breaching the lockdown rules.

Appearing via videolink, Bartel pleaded guilty on Wednesday to the latest charges.

The court heard Bartel claimed she had not received the mail from authorities that her licence had been suspended.

This was despite claims none of the letters had been returned as undelivered.

In pleading for mercy, the court heard Bartel was dependent on her licence to ferry her kids to and from school.

In a double bonus, Bartel was also spared a conviction over the offences. 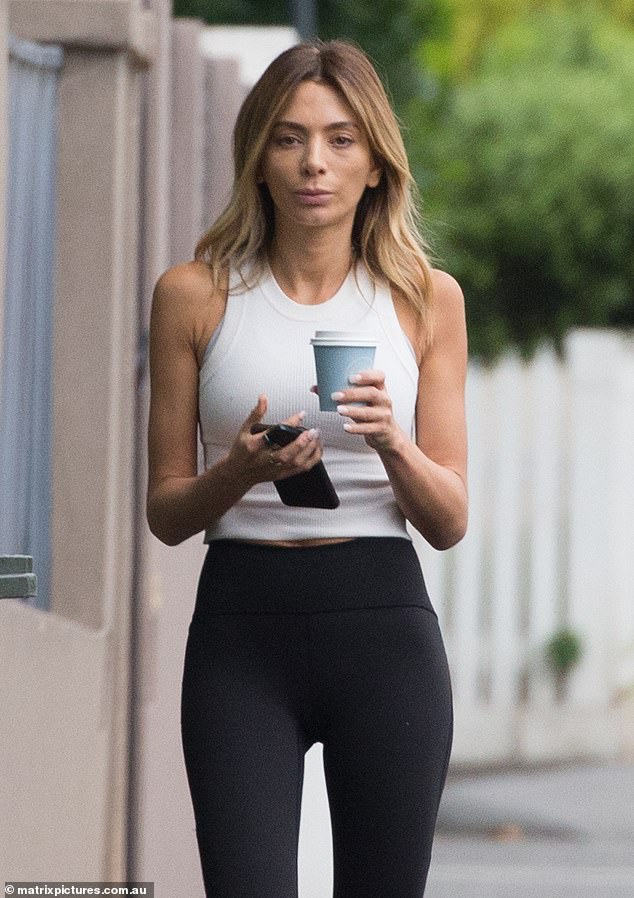 Legs for days: Nadia, 36, clad her slim pins in black leggings for the morning outing

Well-heeled: She kept light on her feet in a pair of black sneakers and carried her mobile phone in her free hand

The court slap-on-the-wrist will come as relief to the attention-seeking mum, who earlier on Wednesday was spotted looking glum as she set out for her morning coffee.

Bartel had previously told the Herald Sun she was ‘not aware’ her driving licence had been suspended.

‘In August I was pulled over by the police who advised me that I was driving on a suspended licence,’ she said.

‘The suspension was due to exceeding my demerit point balance,’ she added.

‘I was not aware of the suspension as communication had been sent to my previous residential address which I didn’t receive.

‘I would never have driven had I been aware of the suspension and my residential details have now been updated.’

The now-infamous video of Bartel breaching Covid restrictions was posted online by her friend Ellie Pearson on September 1, during Victoria’s sixth Covid-19 lockdown.

In the video, she was surrounded by other women who laughed as she leaned over a $1.50 Kmart plate and snorted a line of white powder, during what was an illegal gathering due to lockdown restrictions.

At the time, she said she was ’embarrassed and remorseful’.

‘I have let you all down by my actions,’ she said. ‘I take full responsibility and I am committed to taking all necessary steps to ensure I make better choices in future.’ 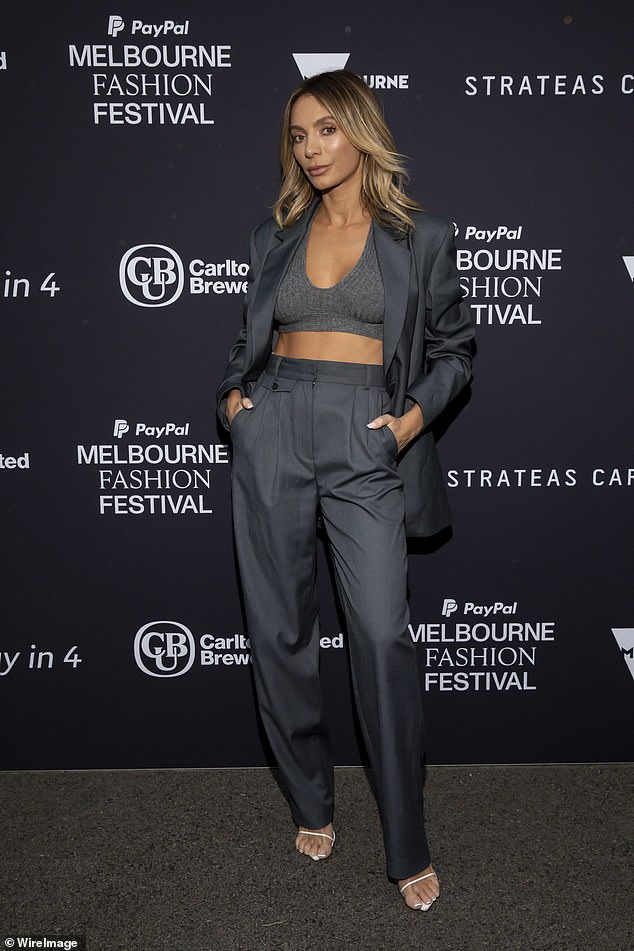 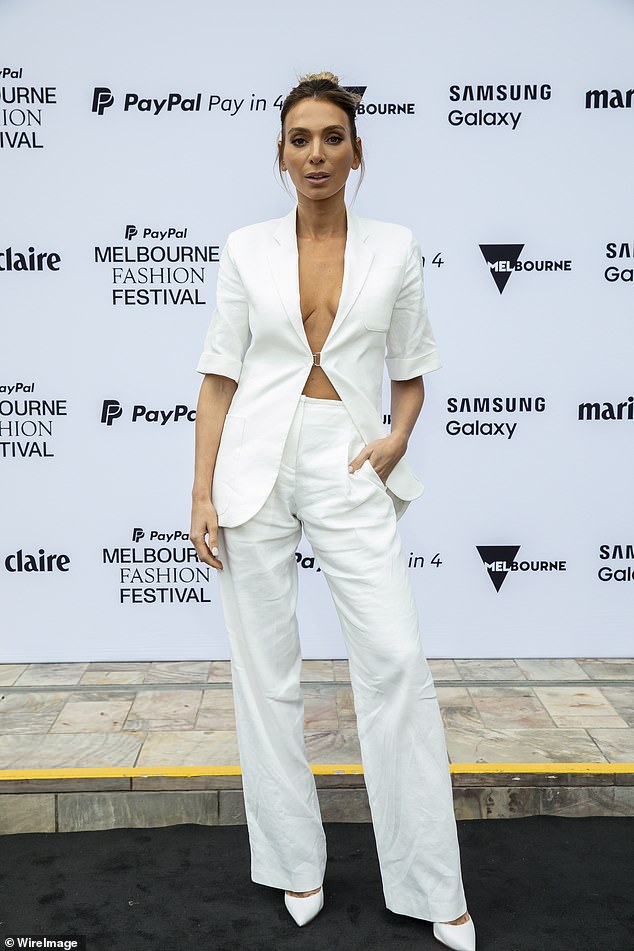 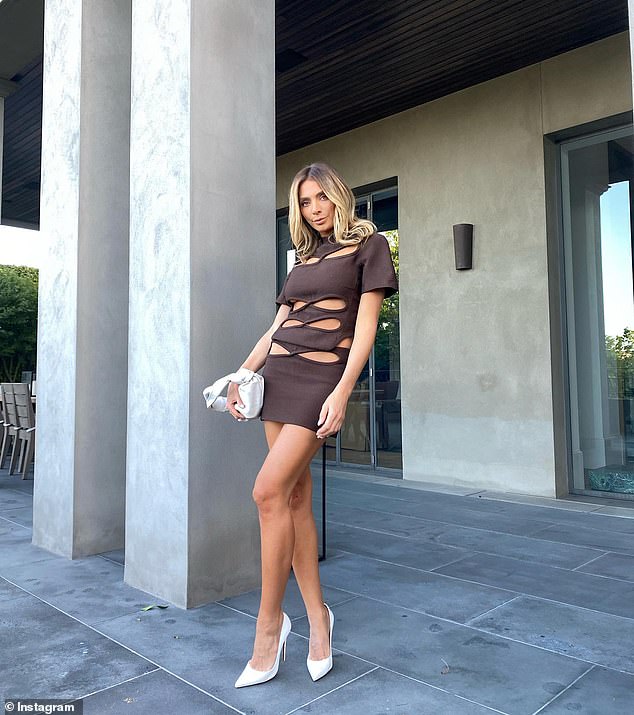