Sometimes, with even the juiciest, most idiotically entertaining and dazzlingly daft story, there’s a danger of telling it too many times, in too many ways. Over-egg the pudding and all the zest is lost.

But this is very much not the case when it comes to the £3 million Rebekah Vardy v Coleen Rooney Wagatha Christie Libel Trial of Epic Silliness that raged for a week in the Royal Courts of Justice, in May.

Back then, it was a fiesta of fake tan and fury that gave us thousands of pounds of designer finery, some truly appalling language, an astonishing insight into the mad, bad, wonderful world of Wags, and seared images of poor Peter Andre’s allegedly chipolata-sized modesty on to our brains for ever.

It grabbed us, perked us, cheered us, added new phrases into our daily lexicon (the Scouse Trap, Wagatha Christie, a tale of Skulwaggery), divided us into #teamrooney and #teamvardy, and left us wanting more, more, more.

Particularly for those who, unlike me, were not lucky enough to watch from the ringside as proceedings unfolded in court.

So, yes, there are two documentaries about the whole thing in the making. And yes, a two-part dramatisation is coming out on Channel 4 later this year starring Michael Sheen as Coleen’s barrister David Sherborne.

Oh no, I am not forgetting that, just this week, Vardy has made new incendiary allegations that she was framed.

Quite simply, we can’t get enough of it all.

Which is why it comes as no surprise to find London’s Wyndham’s Theatre packed to the rafters for what has been billed as a 90-minute football-themed theatrical retelling of the greatest Wag-off of all time.

The set is a mash-up of court room and football pitch — genius! — with two pundits on hand to explain the (not very knotty) points of law.

On one side is Rebekah (played brilliantly by Lucy May Barker) — straight-backed, boot-faced, designer sunglasses glued to her face and hair parted more severely than Frida Kahlo.

Across the stage is Laura Dos Santos’s Coleen — diminutive, but firm, in her disappointing High-Street dress, single Gucci loafer and trusty Aircast boot, with Wayne looking catatonic beside her.

Strutting about like preening peacocks are, for Coleen, David Sherborne, barrister to the stars (including Hugh Grant and, briefly, the Duchess of Sussex), and, for Rebekah (though he had advised her very firmly to settle) Hugh Tomlinson, a previous favourite of former Chelsea FC owner Roman Abramovich. 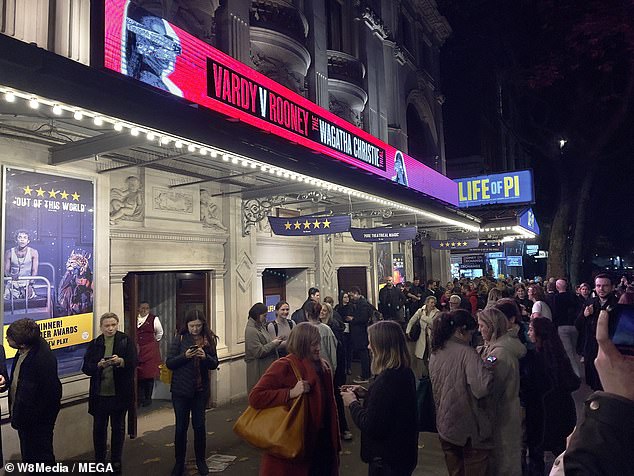 Mrs Justice Steyn, meanwhile, is holding the gavel and looking as though she’d far rather be wrestling over some complicated Saudi arms deal. Or, at the very least, not having to hear about the dimensions of poor Peter’s pecker or get to grips with the various mechanisms of Instagram — bless her, she did really try.

Which is perhaps my cue to fill in a few blanks. Because, while it’s hard to imagine anyone who is not 100 per cent au fait with every twist in the Wagatha saga, just before the show in the theatre bar, I meet Shannon, a music teacher from Canada, who proudly tells me she has no idea what all the fuss is about.

‘I make a point of never reading celebrity gossip,’ she says crisply. ‘But this sounded funny, so I came along.’

For the benefit of Shannon, then, here’s a very quick resumé.

It all started back in 2019 when Coleen was Queen of Wags, which Rebekah desperately wanted to be, and — from her throne — Coleen didn’t much like the look of the stories that kept popping up in The Sun newspaper about her personal life.

Then Queen C spotted something: all the information was coming from her private social media account — nuggets of her life she’d entrusted exclusively to her inner Wag circle, including Rebekah. And so, with her sights set firmly on Vardy — she had previous form on leaking to the Press — Coleen conducted a brilliant sting operation in which she composed posts revealing fake personal information that only Vardy would see.

As the sun rose each day and related articles appeared in The Sun, Coleen doggedly saved and screenshot the evidence to which only one other Instagram account had access.

And then on October 9, 2019 — and in a move worthy of Agatha Christie’s Hercule Poirot (hence ‘Wagatha Christie’), she shared her genius with the world, posting to Instagram and Twitter, and finishing with the great reveal: ‘It’s . . . Rebekah Vardy’s account.’

Naturally, Rebekah, who was seven months pregnant and on holiday in Dubai at the time, denied everything. And, in June 2020, began libel proceedings against Rooney.

Two years, an awful lot of media coverage and several million pounds in legal fees later, the whole sorry business ended up in court — where I was lucky enough to watch and write up match reports for the Mail.

Back here in Wyndham’s Theatre and this is very much the match highlights: all the golden nuggets; the gasp-out-loud and the OMG-did-she-just-say-that moments.

And it’s just brilliant. Better still, it’s all real. Because this play — adapted by Liv Hennessy and directed by Lisa Spirling — contains nothing but genuine dialogue.

It’s all verbatim — lifted word for word from thousands of pages of court transcripts. They really did say all this stuff, Shannon!

Anyone can now witness the best bits of Sherborne’s brilliant cross-examination of Vardy.

Or every time she lied and denied and sighed. Or when her expletive- ridden WhatsApp messages to her PR Caroline Watt would repeatedly smack her in the face: ‘what a ****!’

Meanwhile, Wayne sits solid as a baked potato — staring into space as he learns what his wife has been up to for the past three years while he’s been passing out naked in hotel rooms.

It’s all here. Even down to Sherborne’s reference to Wyatt’s mobile being buried at the bottom of the sea in ‘Davy Jones’s locker’ and Rebekah’s ludicrous remarks comparing Coleen to a ‘pigeon that s***s in your hair’.

And lapping up every word is the friskiest, most excitable audience imaginable. Grasping white wines, proseccos, gin and tonics, or each other hands, everyone cheers and gasps, whoops and hurrahs.

‘I’m not normally into laughing at people’s misfortunes,’ says Tessa, a mature student from East Sussex. ‘But I followed the trial and I wanted to see it in all its glory.’

Adding to the excitement is the presence of the real David Sherborne — sat behind me in deeply tanned splendour (and a rather tight suit) in the Royal Circle, surrounded by a huge entourage, watching himself look brilliantly clever on stage. (And, quite possibly, wondering why actor Tom Turner is looking so disappointingly pasty-skinned).

Of course, a few things are missing from the original. About ten inches off Wayne’s waist, for starters, though Nathan McMullen who plays him is the perfect mix of brilliantly bewildered and surprisingly articulate when it comes to his moment in the box. There were more tears in the real thing, too — mostly from Rebekah who, towards the end of her gruelling cross-examination, lay head in hands and wept in despair.

Also missing is the real Hugh Tomlinson KC. However much I craned, I couldn’t see the old Rottweiler anywhere in the audience — presumably he’s back in his comfort zone dealing with oligarchs.

No sign, either, of Coleen or Rebekah. Or Peter Andre, for that matter.

But perhaps most lacking is the spectacular level of gloss and glamour that only true Wags seem able to achieve.

But forget that. Because these are mere trifles — and not enough to bother this fizzing crowd, who leap to their feet at the end.

Who knows quite why this sorry saga has entertained us so richly. Perhaps it’s because we’re British and it appeals to our brilliantly niche sense of humour. Or because everything else in the world is so unutterably awful right now that we need some light relief.

Whatever the reason, such is the continued demand for all things Wagatha that the producers have extended the show’s run.

My firm advice would be to do everything in your power to get a ticket.