A woman’s Twitter thread has gone viral after she revealed the shocking way in which she discovered her boyfriend had been unfaithful.

Ayana, who works as a waitress in the US, took to Twitter after discovering that her partner had been seeing one of her colleagues who lived just six doors down.

Using the #SameBae Ayana lead her 10,000 followers through the scandalous story on Saturday revealing how she was able to catch him out.

Kicking off her thread Ayana shared the following tweet: ‘When a girl wants to show you a picture of her fine n**** in her phone and she starts pullin up YOUR mans IG page.’

The initial tweet received over 53,000 likes and almost 23,000 retweets as the web became enraptured by the unfolding story.

In the thread Ayana explains that she and a fellow waitress had bonded at work over their similar taste in men.

Ayana discovered her boyfriend was straying after a fellow waitress showed Ayana her boyfriend’s Instagram account, who happened to be the same man

She tells how her colleague had been showing other workers in the restaurant photos of her boyfriend on social media and when she shows Ayana, that was when she began to smell a rat.

She tweets: ‘She goes “I forgot to show you the boy I was talkin bout last week” so she pulls out her phone, opens the instagram app…. 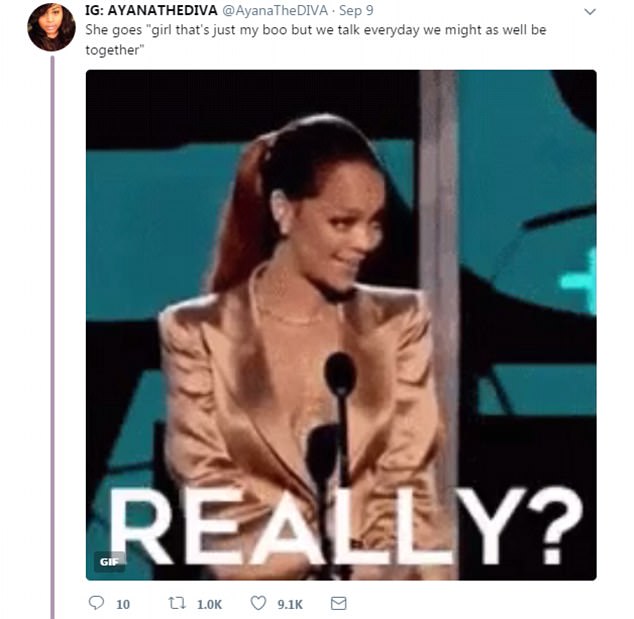 At first Ayana acts dumb, asking her co-worker questions about her partner in the hope to obtain as much information as possible

She continues: ‘In my head im literally praying she doesn’t click on his page …….. But she does’.

Rather than revealing that the man in question is her boyfriend, however, Ayana plays along – asking her co-worker questions about ‘her man’ before inviting her back to her home for a drink, knowing full well that her partner will be home.

It is at this point that Ayana becomes aware at just how sneaky her partner has been – conducting the affair right under her nose. 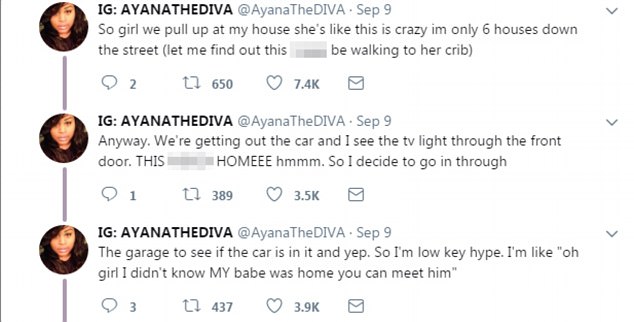 She adds: ‘So girl we pull up at my house she’s like this is crazy im only 6 houses down the street (let me find out this n**** be walking to her crib) (sic)’

After inviting her friend inside Ayana admits that the situation quickly deteriorates after the man in question discovers his mistress.

Continuing, Ayana tweets: ‘She then looks at me and goes “Really Ayana? Why didn’t you just tell me ?? This is embarrassing I wouldn’t have done you like this.”‘

After her co-worker leaves Ayana reveals that she is taking a break from packing up her boyfriend’s possessions to tweet the story.

In her final tweets she writes:  ‘Me and her have talked yall. We are good. She saw the thread …I APOLOGIZED TO HER.

‘My ex still ain’t s*** tho. No we are not together. I am visiting family while he’s at the crib getting his things . He gotta go. TADAY’. 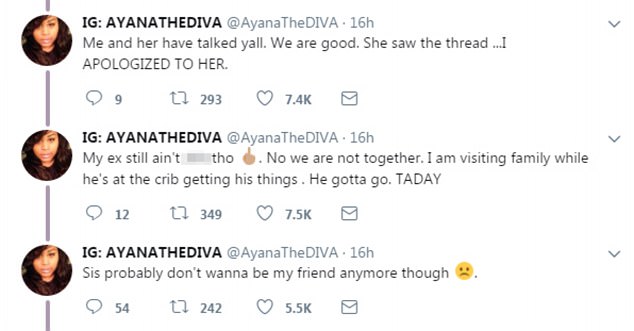