Walgreens stops rationing Tylenol, Advil and other children’s fever meds as ‘supply conditions improve’ and ‘tripledemic’ of viruses peters out

By Meike Leonard For Dailymail.Com

Walgreens announced today it would be scrapping purchase restrictions on children’s fever drugs as a nationwide shortage eases.

The chain said it was dropping its nationwide six item maximum online order rule that was introduced at the height of the ‘tripledemic’.

CVS also introduced a similar restriction, limiting in-store and online purchasing of pediatric pain meds to two products per sale. It has yet to announce an end to this purchase cap.

Walgreens’ decision to end purchasing restrictions is due to improved stock conditions, according to its online statement

At its peak, rates of hospitalizations from the viruses – as well as Covid – were so high that hospital bed occupancy in the US reached a higher point than at any time during the pandemic.

Some pediatric units were even forced to erect tents in parking lots due to the overwhelming number of patients.

As over-the-counter supplies dwindled, online purchases of Tylenol, Advil and Motrin were limited by Walgreens to six products per order, while CVS capped both online and in-store purchases to two per person. 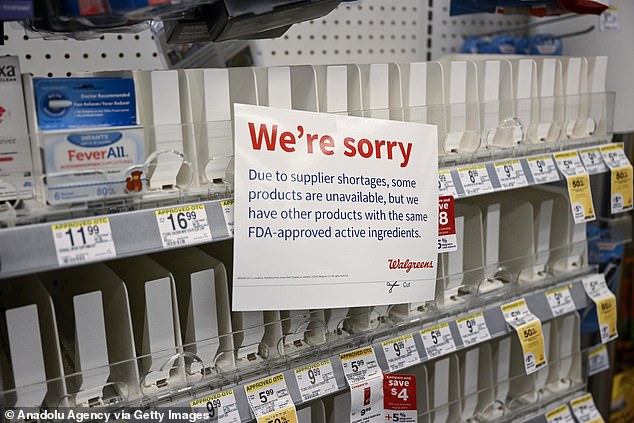 Shelves of pediatric pain and fever medication were empty earlier this winter, as a combination of supply chain issues and the tripledemic of flu, RSV and Covid left many parents at a loss for how to treat their sick kids

In an online statement, Walgreens said the restriction reversal was due to ‘improved in-stock conditions of over-the-counter pediatric fever-reducing products’.

‘Walgreens has worked diligently with our suppliers to ensure we have enough supply to meet customer demand nationwide,’ it stated.

Children’s Tylenol – also known as acetaminophen – remains out of stock for shipping on Walgreens’ website, but can be picked up in stores. Pediatric Motrin – ibuprofen – is still sold out online and in stores.

CVS has not yet announced an end to its purchasing restrictions.

Neither flu nor RSV poses a particularly severe risk for the general US population, but both can be dangerous for the elderly, very young children and the immunocompromised.

Both viruses – as well as the newest strain of Covid, XBB.1.5 – are extremely contagious, however, as many parents discovered this winter.

According to weekly data from the CDC, the numbers of flu cases have fallen consistently over the past three weeks, as have those of RSV.

Covid cases, however, continue to climb in the US. As of January 4, the current 7-day average of weekly new cases increased by 16.2 percent from the previous 7-day average, rising from 67,243 to 57,847 cases nationwide.