We have all, at some point, found ourselves in fits of laughter at John Cleese flailing his legs around during a Monty Python sketch.

Now researchers are urging people to join the Ministry of Silly Walks – as it could help adults meets their physical activity goals.

In the last 20 years, global rates of inactivity have not budged despite widespread campaigns to boost fitness and encourage people to move more.

But the outrageous – and inefficient – walking styles of Mr Teabag and Mr Putey, played by John Cleese and Michael Palin in the 1971 Monty Python sketch, could be the solution, according to scientists. 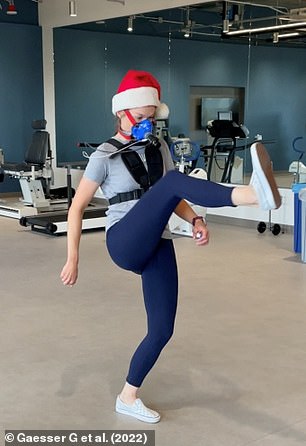 Study participants were asked to recreate the walks of Mr Teabag (left) and Mr Putey that they had seen in the video clip from ‘Monty Python’s Flying Circus’. Teabag’s walking style involves moving forward with slightly bent legs, interspersed with high-kicks, backwards hops and other erratic leg jerks 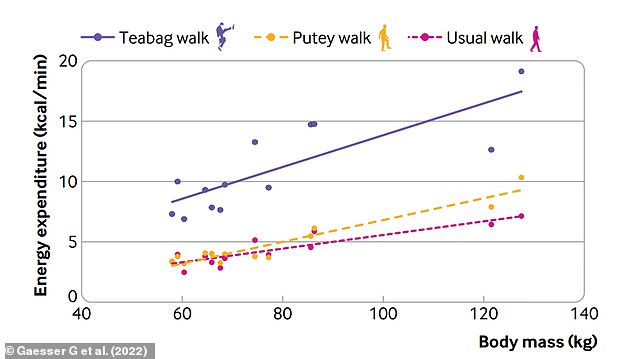 Association between energy expenditure (kcal/min) and body mass (kg) for participants’ usual walking, the Putey walk and the Teabag walk

A team led by researchers at Arizona State University set out to compare the energy expenditure of different walking styles.

They recruited 13 healthy adults, aged between 22 and 71, with no history of heart or lung disease and no known gait disorder.

Height and body weight were measured and each participant was shown a video of the Ministry of Silly Walks sketch before performing three walking trials, each lasting five minutes, around an indoor 30-metre course.

In the first trial, participants walked in their usual style at a freely chosen pace.

For the next two trials, participants were asked to recreate, to the best of their ability, the walks of Mr Teabag and Mr Putey. 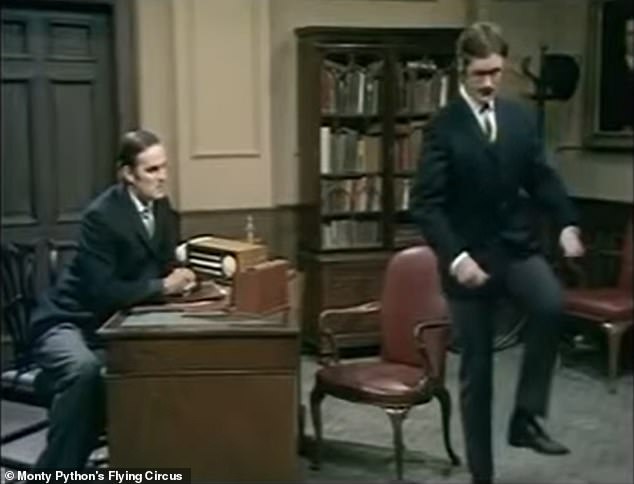 The Putey walk (pictured) consists of the left knee being lifted at a 90 degree angle every alternate step. This does not require significantly more energy than normal walking

Monty Python’s famous ‘Silly Walk’ created by John Cleese is ‘exactly 6.7 times’ more silly than a normal walk and it’s down to the way he flexes his knees, a study finds.

The walk was examined by biologists from Dartmouth College, New Hampshire who study the origin and evolution of bipedal walking.

The team, led by Nathaniel Dominy said it is a good example of the extreme variation in walking styles possible in two-legged species.

They found the silliness came from the knee flexing – particularly the angle which is bent through 110 degrees compared to the normal 20 degrees.

The Putey walk, on the other hand, consists of the left knee being lifted at a 90 degree angle every alternate step.

The researchers found that only the Teabag walk resulted in a significantly greater energy expenditure — about 2.5 times that of usual walking.

The Teabag walk also elicited such a high oxygen uptake that it qualified as vigorous intensity exercise.

The researchers estimate that adults could achieve the recommended 75 minutes of vigorous intensity physical activity per week by walking in Teabag style — rather than their usual style — for about 11 minutes per day.

And substituting usual-style steps with Teabag-style steps for about 12 to 19 minutes per day would increase daily energy expenditure by approximately 100 calories.

This amount of walking in Teabag style would likely increase cardiorespiratory fitness, reduce mortality risk, and would require no extra time commitment because it replaces movement adults already do with higher energy physical activity, they add.

Writing in the BMJ, they said: ‘We take our lead from the so-far unrecognised scientific genius of Monty Python’s Ministry of Silly Walks.

‘We are not aware of a single study that has quantified the energy cost of walking like Teabag or Putey since the skit first aired.’ 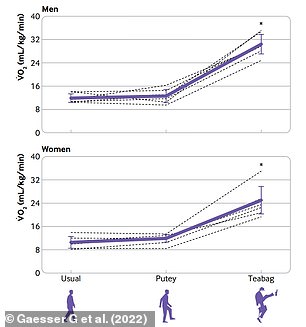 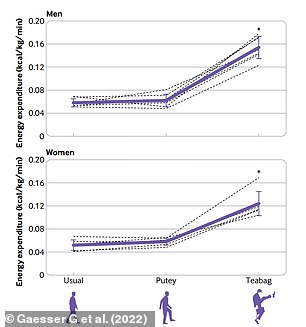 Oxygen uptake (left) and energy expenditure (right)  during participants’ usual walking and inefficient walking in men and women. Black lines are responses for individual participants. Purple line is the average

They said they did not measure ‘minutes spent laughing or number of smiles’ as part of their study, but noted: ‘Bursts of laughter from the participants were frequently noted by the supervising investigator, almost always when participants were engaging in the Teabag walk.

‘Half a century ago, the Ministry of Silly Walks skit might have unwittingly touched on a powerful way to enhance cardiovascular fitness in adults.

‘Had the health profession taken the Ministry of Silly Walks to heart in the 1970s, hearts everywhere might be healthier.’

Find out how your smartphone fitness tracker can predict your risk of dying by analysing your walking data.

A study has claimed that early humans first walked upright in the TREES and not on the ground as previously thought.

And, research has revealed that dogs whose owners spend a lot of time exercising are more likely to be fit themselves.

Maybe we DON’T always look on the bright side of life: Scientists cast doubt on the theory that optimism is ingrained in human nature

Monty Python told us to ‘always look on the bright side of life’, but it seems optimism isn’t as ingrained in human nature as previously thought, a new study claims.

Researchers have found that humans aren’t predisposed to optimism, nor do we go around with ‘a pair of rose-tinted glasses’ – a belief that may have biased the findings of previous studies.

Experts cast doubt over past research supporting the existence of ‘irrational optimism bias’ – that humans innately have a feeling that everything will be alright.