Want a car that will pass its MOT first time? You need a Ferrari!

Ferrari owners are statistically more likely to see their exotic motors sail through an MOT at the first time of asking than drivers of any other make of car, according to analysis of test data held by the DVSA.

The Italian supercar company had an impressive MOT pass rate of 93 per cent in 2020 for vehicles aged 3 to 15 years, suggesting that the ultra-expensive supercars are proving they can endure the test of time despite their highly-strung performance parts – and their owners are, as you’d expect, taking extra special care of their cherished motors.

The top of the list was dominated by prestige car makers, including Bentley, Aston Martin and Porsche, while the opposite end of the spectrum shows that Chevrolets have the highest failure rates of all brands.

Fezzas fly though their MOTs: It shouldn’t come as a massive surprise that cars with six-figure price tags are performing well in annual roadworthiness checks…

Of the 6,362 Ferraris aged up to 15 years that had an MOT in 2020, just 443 failed – giving the manufacturer a statistically higher pass rate than any other car maker last year.

Unsurprisingly, the top performers for passing the test were predominantly luxury brands – the cars that cover less annual miles and spend most of their time in the garage or private collections.

Bentley (91.2 per cent), Aston Martin (90.3 per cent) and Porsche (88 per cent) were behind Ferrari for the best pass rates of all car brands on average.

Tesla was another strong performer, despite the brand being linked to poor production quality in recent years.

This was marginally better than Japanese car firm Lexus – a regular at the top of the rankings for vehicle reliability surveys.

The maker – owned by Toyota – had an 82.6 per cent MOT pass performance, which put it ahead of Maserati, Mercedes-Benz and the surprise manufacturer in the list, DS.

That said, DS Automobiles has only been a standalone brand since 2015 when it was officially no longer recognised as a sub-marque of Citroen, meaning its pool of cars analysed for the study are significantly younger than the averages for most other makes dating back to 2005. 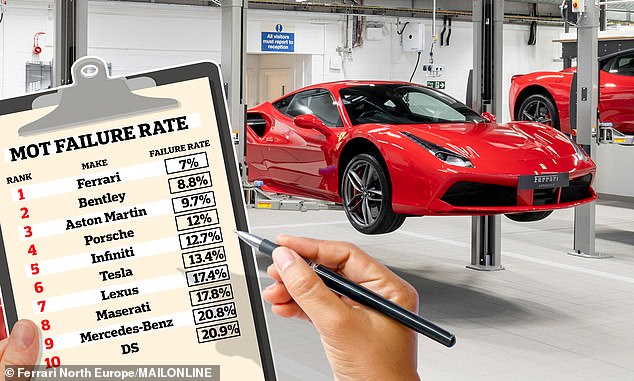 Some 7% of Ferraris up to 15 years old failed their MOT last year – that’s the lowest failure rate of all car brands, according to the DVSA figures shared by BookMyGarage.com 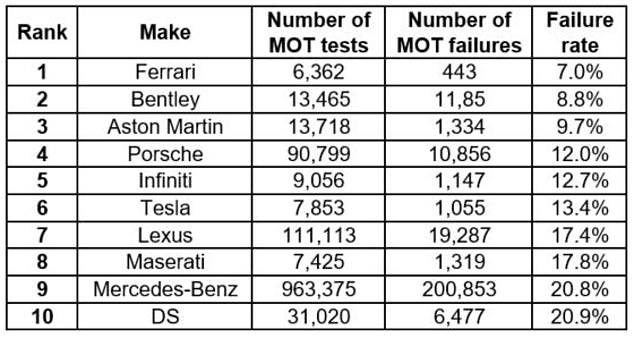 Top 10 brands with lowest MOT failure rate in 2020 of cars aged three to 15 years old and with a minimum of 5,000 tests conducted throughout the year

Chevrolet took last place, with just over half (54.4 per cent) of its cars passing first time – though the US brand hasn’t sold any of its mainstream models in the UK since 2014 and therefore has a sample of older vehicles only that are more likely to have suffered from wear and tear.

Jessica Potts, head of marketing at BookMyGarage.com, which requested the MOT data from the DVSA, said it was ‘no surprise’ to see luxury brands like Ferrari perform best for passing an MOT, given they’re likely cherished more than a mainstream car – and the quality you’d expect from such a pricey motor.

‘Owners of prestige car brands often cover fewer miles annually as the car is unlikely to be the owner’s sole vehicle and they are usually maintained to very high standards,’ she said.

‘MOT pass rates are less indicative of brand reliability and more a representation of how well owners maintain their car and how much of a ‘workhorse’ a particular brands’ models tend to become.

‘That being said, there’s a noticeable dominance of more mainstream Japanese brands in the Top 10, which perhaps goes some way to prove the notion that Japanese cars are indeed very reliable.’ 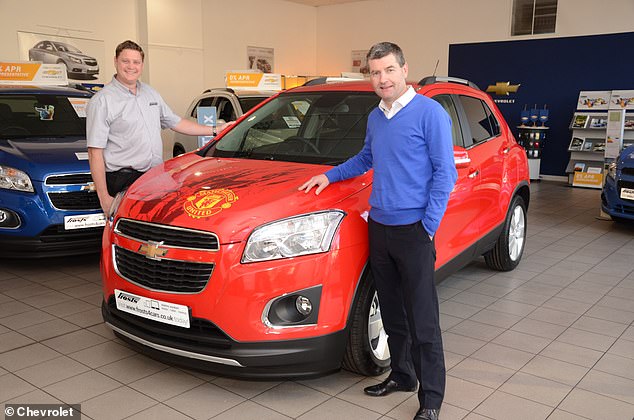 Former Manchester United and Republic of Ireland left-back Denis Irwin poses with a Chevrlet Trax donated to a West Sussex dealership to be used to raise money for charity (picture from 2013, before Chevrolet pulled out of the UK market)

A review of cars taking their MOT for the first time (at three years old) showed that Ferraris came out on top there too, again ahead of rivals Bentley and Aston Martin – though with Porsche dropping to sixth place.

Of the more mainstream brands, it was purely Japanese marques that filled the rest of Top 10, with Subaru and Lexus taking fourth and fifth places, and seventh to tenth occupied by Honda, Infinity, Mazda, and Suzuki respectively.

At the other end of the results, SsangYong fared less successfully, coming in last with a failure rate of just 78.1 per cent – a pretty difficult stat to swallow for customers who had forked out on their new cars just 36 months earlier.

However, success at a test centre is as much about the keeper’s maintenance as it is about the durability of the motors and their parts.

The most common MOT fails are due to owner neglect – such as the 6.8 per cent of cars that flunk the assessment because of illegal tyres.

The average pass rate for cars sitting their test for the very first time was 78.1 per cent, the figures show. 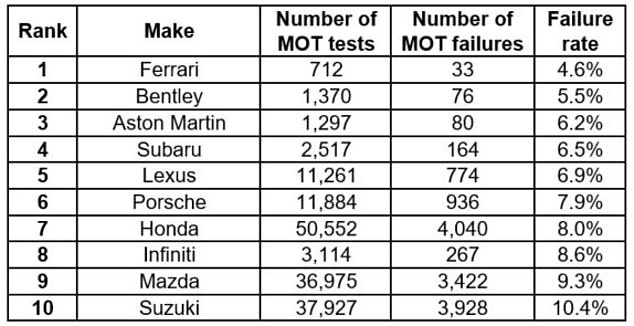