War between Russia and the West is no longer hybrid but is ‘almost a real one’, Sergei Lavrov warns

Russian foreign minister Sergei Lavrov today warned the war between Russia and the West is no longer hybrid but was ‘almost a real one’, as he blasted Western nations for sending billions of pounds worth of arms to Ukraine.

Western allies have pledged to send scores of weapons to Kyiv and Poland’s prime minister said today his government would ask Germany for permission to send Leopard tanks to Ukraine – and planned to send them whether or not Berlin agreed.

The Kyiv government desperately wants the German-made Leopard 2 tank to break through Russian lines and recapture territory this year.

Lavrov today claimed that the conflict between Moscow and the West could no longer be defined as a ‘hybrid war’, but was closer to a real one.

Russian foreign minister Sergei Lavrov today warned the war between Russia and the West is no longer hybrid but was ‘almost a real one’, as he blasted Western nations for sending billions of pounds worth of arms to Ukraine

His comments during a visit to South Africa comes as Poland’s government today pushes its Western allies to move faster on supplying Kyiv with more military hardware to thwart Russia’s invasion.

Previously, Polish officials have indicated that Finland and Denmark were ready to join Warsaw in sending Leopards to Ukraine, while the UK has pledged to send some of its Challenger tanks.

Meanwhile, Lavrov also claimed Moscow was willing to negotiate with Ukraine in the early months of the war but the U.S. and other Western nations advised Kyiv against it.

Lavrov’s remarks on a visit to South Africa were similar to those made last year by Russian President Vladimir Putin that his country was for talks but Ukraine’s Western allies prevented that from happening.

The U.S. and other Western nations have said that Russia is not serious about negotiations to end the war, set to mark its one-year anniversary next month.

‘It is well known that we supported the proposal of the Ukrainian side to negotiate early in the special military operation and by the end of March, the two delegations agreed on the principle to settle this conflict,’ Lavrov said.

‘It is well known and was published openly that our American, British, and some European colleagues told Ukraine that it is too early to deal, and the arrangement which was almost agreed was never revisited by the Kyiv regime.’

Russia has repeatedly rejected Ukrainian and Western demands that it withdraw completely from Ukraine as a condition for any negotiations. President Joe Biden has indicated he would be willing to talk with Putin if the Russian leader demonstrated that he seriously wanted to end the invasion.

Lavrov is in Pretoria for talks with his South African counterpart Naledi Pandor as Russia pushes to strengthen ties with Africa’s most developed country and an historical ally amid the ongoing conflict in Ukraine.

South Africa was seen as the most significant of several African nations to take a neutral stance on the war and refuse to condemn Russia’s invasion – to the disappointment of the U.S. and other Western partners who also view South Africa as pivotal to their plans to build relationships in Africa.

Lavrov met with Pandor in the South African capital and is expected to visit other African countries on his trip. It’s Lavrov’s second visit to Africa in the space of six months as Russia seeks to rally support. 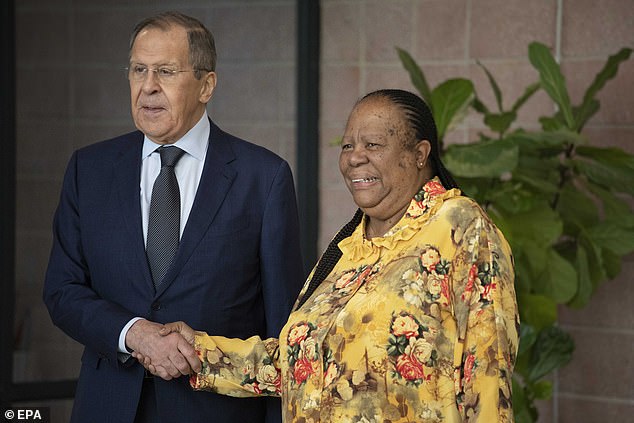 Sergei Lavrov (L), the Minister of Foreign Affairs of the Russian Federation, is welcomed for bilateral talks with his South African counterpart, Minister of International Relations and Cooperation, Dr. Naledi Pandor (R), in Pretoria, South Africa, on Monday

The war in Ukraine and its impact on Africa’s 1.3 billion people, which includes rising global oil and food prices, is expected to take center stage during Lavrov’s talks with Pandor.

‘We are fully alert that conflict, wherever it exists in the world, impacts negatively on all of us, and as the developing world it impacts on us particularly as the African continent,’ Pandor said. ‘This is why as South Africa we consistently articulate that we will always stand ready to support the peaceful resolution of conflicts in the continent and throughout the globe.’

South Africa continues to keep strong bonds with Russia following the Soviet Union’s support for the country’s current ruling party, the African National Congress, when it was a liberation movement fighting to end the apartheid system of repression against South Africa’s Black majority.

That relationship is largely what led South Africa to abstain from a United Nations vote last year condemning Russia’s actions in Ukraine.

Despite South Africa’s expressed neutrality over Ukraine, Lavrov’s visit comes days after the South African armed forces announced they would hold joint drills with the Russian and Chinese navies off its eastern coast next month.

Lavrov’s visit to Africa last year was closely followed by U.S. Secretary of State Antony Blinken’s trip to South Africa that was seen as a U.S. bid to counter expanding Russian influence in a strategically important continent.

This is a breaking news story, more to follow…