A British Muslim leader wanted by Interpol having been found guilty of war crimes is currently living in a £1m house in a north London suburb.

Chowdhury Mueen-Uddin, who was photographed with Prince Charles in 2003 at an event in Leicester was found guilty of ‘abetting and complicity to the commission of the offence of extermination as a crime against humanity’ in his native Bangladesh.

The charges relate to the murder of 18 people during the nation’s brutal War of Independence in 1971.

Prince Charles, centre, met with Chowdhury Mueen-Uddin, left, during a visit to the Markfield Islamic Foundation in Lecestershire in 2003 – ten years before his war crimes conviction 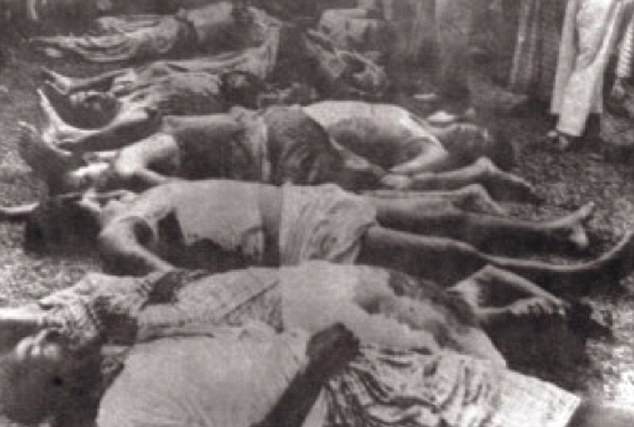 Mueen-Uddin, who was found guilty in his absence in 2013 on 11 charges.

According to Interpol, Mueen Uddin has been ‘convicted and condemned to the single sentence of death for the crimes listed in all the charges and they be hanged by the neck till they are dead under section 20(2) of the International Crimes (Tribunals) Act, 1973’.

However, Britain does not have an extradition treaty with Bangladesh and is unlikely to return Mueen Uddin to face his sentence as it is not government policy to send people to face execution.

Mueen Uddin was tracked down to his home in Southgate, north London by The Sun.

Muenn Uddin rejected the finding of the international tribunal declaring the conviction as ‘all rubbish’.

He said he is looking to overturn the Interpol red notice which is calling for his arrest.

Mueen Uddin is accused of being involved in the torture and murder of 18 people including doctors and academics – an allegation he strongly denies.

In response to the guilty verdict in 2013, Mueen Uddin released a statement claiming the judicial process against him was ‘neither open nor fair, and does not meet international standards’.

He wrote: ‘For the record, let me state clearly where I stand on the events of 1971. I was a journalist at the time, and yes, I supported the unity of Pakistan.

‘However, supporting the unity of a sovereign nation is one thing, getting involved in crimes is not what I have taken part in any way, shape or form.

‘While I remain interested in events in Bangladesh, I have for the last forty years concentrated my efforts in community work here in the United Kingdom. This includes supporting the welfare of British Bangladeshis, and the lives of fellow Britons. The UK has been my home and has been so for my children.’

Mr Mueen-Uddin had previously worked for the NHS as who was director of Muslim Spiritual Care Provision and chairman of the Multi-Faith Group for Healthcare Chaplaincy.

He is one of 24 Britons on the Interpol most wanted list.