War Requiem review: Musically fine, but it’s a pity about the staging

I feel the same about this staged War Requiem, despite the outstanding quality of much of the music-making.

Britten’s War Requiem, commissioned for the opening of Sir Basil Spence’s Coventry Cathedral in 1962, has come to be regarded as the ultimate memorial to the horror of mechanised war, and the necessity for a civilised society to commemorate sacrifice. 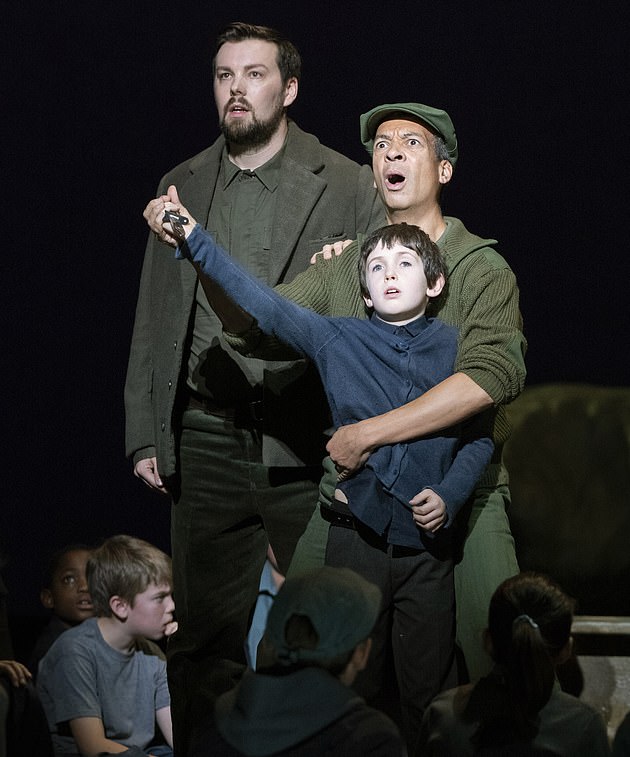 David Butt Philip and Roderick Williams (above), as the two soldiers, sang with heartfelt conviction. Emma Bell was the capable soprano soloist

Britten took the view that there should be no applause at the end, just silent contemplation of all that had transpired, a wish observed at the premiere. He would have been horrified at the end of the first night here.

The production team sashayed on to wild applause as if they had just presented Die Fledermaus. A surtitle said recording the curtain calls was fine. Another sent best wishes to the audience: banality raised to the status of high art.

No reverence, no time for remembrance, or for reflection at the scale of the suffering Wilfred Owen and Britten had depicted.

A shame, because musically it was a fine performance. The 130 singers – English National Opera’s regular chorus plus the wonderful group of singers assembled for their Porgy And Bess – were magnificent, under the inspired baton of Martyn Brabbins.

As a concert performance this would have deserved a standing ovation. But the muddled ordinariness of the staging robbed the work of much of its dignity.

Wilfred Owen’s Abraham And Isaac poem was dominated by a huge photo of a dead sheep. The sheep is part of it, of course, but not at the heart of the matter.

At the close, pretty photos of foliage were displayed, as if an advert for the Chelsea Flower Show had intruded itself. In between there were gauche references to London knife crime, football hooliganism and Srebrenica, all of which devalued the scale of the suffering in World War I of those who, in Owen’s words, died like cattle on the Western Front.

The chorus stumbling about, or lying around, evidenced the mindless lack of direction here. And also the folly of adding, to this near-perfect masterpiece, pictures and actions that merely debased its currency, of conveying loss and grief on a monumental scale.