Ocado has been left nursing losses of £10million after a major fire at its biggest robotic warehouse.knocked £35million off sales

The online grocer said the blaze in July at its Erith site, in south-east London, came when a malfunction caused three of its machines to collide.

Hundreds of staff had to be evacuated and 100 firefighters and 15 fire engines were marshalled to tackle the incident.

Ocado said the blaze in July at its robotic warehouse in Erith, south-east London, came when a malfunction caused three of its machines to collide

And although just a small part of the warehouse was damaged, the disruption still caused mayhem.

Ocado said the Erith site was forced to close for three days, resulting in orders being cancelled, and it is still not back to full capacity.

Other warehouses took on some of the burden, but it meant some orders were affected the following week and Ocado had to offer fewer grocery delivery slots to customers for almost two months.

As a result, the firm’s UK business, a joint venture with Marks & Spencer, missed out on an estimated 300,000 orders, worth £35million.

That sent the company’s third-quarter revenues plunging by 10.6 per cent compared to a year ago to £517.5million.

Ocado said it also suffered other blows such as a loss of stock, with the overall costs not covered by insurance amounting to £10m. 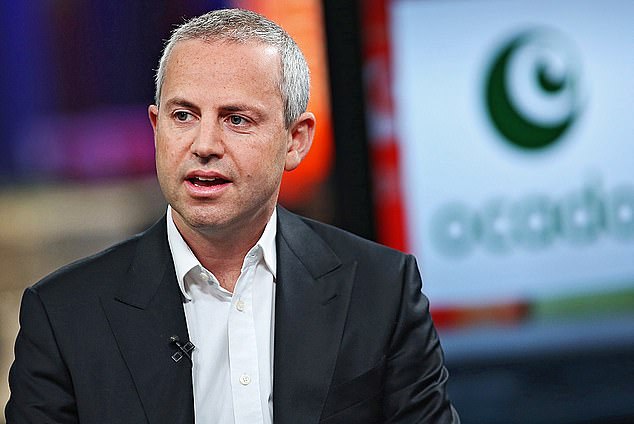 The firm’s pioneering warehouse at Erith usually handles 150,000 orders per week, thanks to more than 1,000 robots on a grid that zip around to pick groceries for delivery.

However the fire was the second major blaze at one of the company’s warehouses in two years, after a far more damaging inferno burnt down its site in Andover, Hampshire in 2019.

Sophie Lund-Yates, an equity analyst at Hargreaves Lansdown, said: ‘This kind of operational problem is something Ocado can ill afford.

As we head into the most important trading period of the retailer’s year, it’s crucial that all dents have been ironed out, so it can fully capitalise on the festive season.’

Chief executive Tim Steiner said: ‘Despite the challenges we faced in the period, I am delighted to report that Ocado Retail is performing well, improving the customer experience even further and continuing to grow the business in a post-lockdown environment.

‘I would like to pay tribute to the efforts of all my colleagues who worked so hard to get Ocado back to business so quickly following the fire.

‘The success of these efforts demonstrated again the resilience of Ocado and its people.’

The company has predicted ‘strong growth’ in 2022.

Ocado will spend up to £5million extra this year in pay rises and signing-on bonuses for lorry drivers.

The online grocer said the shortage, caused by Brexit and the pandemic, has become an increasingly important issue.

It called on the Government to add HGV drivers to the skilled shortage list to fill the vacancies hitting supply chains across the country.

Ocado chairman and co-founder Tim Steiner said increasing the number of testers would be a solution.

He said: ‘What is clear is that there is a shortage and it seems to have been significantly exacerbated by the lack of testing that went on while testing facilities were closed or restricted during the Covid period.

‘We wouldn’t want the shortage to be addressed by putting unqualified or dangerous drivers on the road, but we do need as a country to address the shortage.’