Warner Brothers teams up on Lord of the Rings-themed WINE

Warner Brothers teamed up with and American wine company to produce a limited-edition collection of reds and whites inspired by The Lord of the Rings.

Wine company Lot18 and Warner Bros. Consumer Products collaborated to create four different types of wine inspired by New Line Cinema’s famous trilogy (and the books the story is based on).

Honoring some of fan’s favorite characters from the series, the limited-edition collection – which is only available while supplies last – pays homage to some members of the Fellowship, including Gandalf, Frodo Baggins, Aragorn, and Galadriel, Lady of Lothlórien.

Collaboration: Warner Brothers teamed up with wine company Lot18 to produce a limited-edition collection of four wines inspired by The Lord of the Rings Trilogy

Included in the assortment of alcohol based off the fantasy movies are four wines, exclusively available at Lot18. Only 6,000 bottles of each are being manufactured.

The 2015 Aragorn Appellation Lussac – St. Émilion Contrôlée is $25 and features a blend of 80 per cent Merlot, 15 per cent Cabernet Franc, and 5 per cent Malbec. It is described as ‘rich, concentrated and built to last,’ while the site boasts, ‘If ever there was a wine fit for a king as mighty and honorable as Aragorn, this is it.’

The 2016 Galadriel Bordeaux Blanc white wine is $18 and has flavors of grapefruit, lemon, and lemongrass.

‘The most noble and powerful of the Elves is honored by this high-toned wine, a Bordeaux Blanc with piercing citrus flavors and remarkable concentration.

‘Just as Galadriel is revered by all those graced by her presence, this impressive white is a true testament to her strength and wisdom, imbuing an immediate sense of devotion with its graceful palate. Take a sip and fall under its ethereal spell,’ the site states. 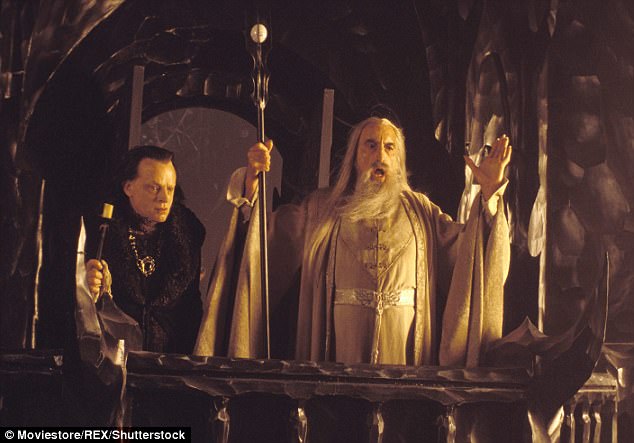 Limited-edition: The wine collection honors four members of the Fellowship including Gandalf, Frodo Baggins, Aragorn, and Galadriel, Lady of Lothlórien

Any fan of the movie (and, of course, zinfandels) will enjoy the 2016 Frodo Lodi Old Vine Zinfandel, which is ‘as honest and pure as a hobbit’s heart.’

The $20 bottle of red has flavors of blackberry, fig, and spiced plum and was crafted in honor of Frodo Baggins, keeper of the ring, and is ‘the most adventurous one of them all’ according to Lot18.

‘Just as hobbits are sturdier than they appear, so are the old vines that produced this red, which have endured for decades to survive – and flourish – against all odds,’ the site continues.

‘The great Wizard Gandalf can only be embodied by a variety as respected and celebrated as Pinot Noir,’ says the company. ‘Like the wise old wanderer, this subtle, yet complex red is unassuming at first glance, but quickly revealed to be spirited and persuasive, with black raspberry, alpine strawberry, and forest floor flavors casting a spell over your palate, bringing you back sip after sip.’