Warning signs may have been missed in school shooting case

PARKLAND, Fla. (AP) – Months before authorities say Nikolas Cruz walked into his former high school and slaughtered 17 people, the troubled teen began showing what may have been missed warning signs he was bent on violence.

“Im going to be a professional school shooter,” a YouTube user with the screen name “Nikolas Cruz” posted in September.

The 19-year-old had gotten expelled from Marjory Stoneman Douglas High School. A former Junior ROTC cadet, he bought a military-style AR-15 carbine. And he began to participate in paramilitary drills with a white nationalist organization, according to its leader, Jordan Jereb.

Parents meet at a hotel in Coral Springs, Fla., Wednesday, Feb. 14, 2018, to pick up their children, following a shooting at nearby Marjory Stoneman Douglas High in Parkland, Fla. A former student opened fire at the Florida high school Wednesday, killing more than a dozen people and sending scores of students fleeing into the streets. (Jim Rassol/South Florida Sun-Sentinel via AP)

Jereb, leader of Republic of Florida, told The Associated Press on Thursday that his group seeks to create a white state. He said he didn’t know Cruz personally but was told the young man had “trouble with a girl,” and he suggested the timing of the Valentine’s Day attack wasn’t a coincidence.

Students and neighbors reported, too, that Cruz threatened and harassed others, talked about killing animals, posed with guns in disturbing photos on social media, and bragged about target practice in his backyard with a pellet gun.

In fact, students weren’t surprised when Cruz was identified as the gunman in Wednesday’s rampage, said 17-year-old Dakota Mutchler.

Benjamin Bennight, a Mississippi bail bondman, was concerned enough after seeing the “professional school shooter” comment on his Youtube channel that he took a screenshot of it on his phone and called the FBI. Two FBI agents visited Bennight the next day.

The FBI said it never spoke to the Florida teen.

Math teacher Jim Gard told The Miami Herald that before the shooting rampage, Cruz may have been identified as a potential threat. Gard said he believes the school had sent out an email warning teachers that Cruz shouldn’t be allowed on campus with a backpack.

“There were problems with him last year threatening students, and I guess he was asked to leave campus,” Gard told the newspaper.

Student Victoria Olvera, 17, said that Cruz had been abusive to his ex-girlfriend and that his expulsion was over a fight with her new boyfriend. Cruz had been attending another school in Broward County since the expulsion, school officials said.

Jonathan Guimaraes, 17, told the Herald that he had been in JROTC with Cruz. “He was quiet, nice,” Guimaraes said. “That’s how he was able to blend in. He was wearing his JROTC uniform.”

Cruz had on a maroon polo shirt bearing an ROTC insignia and the school’s eagle mascot when he was arrested.

Cruz was an orphan – his mother, Lynda Cruz, died of pneumonia Nov. 1, neighbors, friends and family members said, according to the Sun Sentinel. Cruz and her husband, who died of a heart attack years ago, adopted Nikolas and his biological brother, Zachary, after the couple moved from Long Island in New York to Broward County, Florida.

The boys were left in the care of a family friend after their mother died, family member Barbara Kumbatovich, of Long Island, said.

Unhappy there, Nikolas Cruz asked to move in with a friend’s family in Broward County. The family agreed, and Cruz moved in around Thanksgiving.

According to lawyer Jim Lewis, who represents but did not identify the family, they knew that Cruz owned the AR-15 but made him keep it locked up in a cabinet and never saw him go to a shooting range with it. He did have the key, however.

Cruz passed a background check and legally purchased the assault weapon from a licensed dealer in February 2017, a law enforcement official not authorized to discuss the investigation publicly told the AP on condition of anonymity.

The family is devastated and shocked, lawyer Lewis said. During the three months Cruz lived there, he was respectful and quiet but also sad over his mother’s death, Lewis told the AP.

“No indication that anything severe like this was wrong,” Lewis said. “Just a mildly troubled kid who’d lost his mom. … He totally kept this from everybody.”

Longtime Cruz family neighbors Malcolm and Christine Roxburgh told the Sun Sentinel that the police came to the boy’s house many times because he used to get in trouble and harass people. Malcolm Roxburgh said a neighbor across the street kept pigs, and Nikolas Cruz targeted the family.

His wife said she once caught Nikolas peeking in her window.

“I said, ‘What are you doing here?’ He said he was looking for golf balls. I said, ‘This isn’t the golf course,'” she said.

And, the couple said, when the boy didn’t want to go to school, he would bang his head against a concrete wall. They were scared of him. “He could have killed any of us,” Christine Roxburgh said.

Cruz was getting treatment at a mental health clinic for a while but hadn’t been there for more than a year, Broward County Mayor Beam Furr said in an interview with CNN.

“It wasn’t like there wasn’t concern for him,” Furr said. “We try to keep our eyes out on those kids who aren’t connected. … In this case, we didn’t find a way to connect with this kid.”

Investigators said they are dissecting Cruz’s disturbing social media posts, without elaboration. But fellow students said they recognized Cruz from an Instagram photo in which he posed with a gun in front of his face.

Mutchler recalled Cruz posting on Instagram about killing animals and said he had talked about doing target practice in his backyard with a pellet gun.

“He started going after one of my friends, threatening her, and I cut him off from there,” Mutchler said.

But Broward County School District Superintendent Robert Runcie said he did not know of any threats against the school from Cruz.

“Typically you see in these situations that there potentially could have been signs out there,” Runcie said. “I would be speculating at this point if there were, but we didn’t have any warnings. There weren’t any phone calls or threats that we know of that were made.” This photo posted on the Instagram account of Nikolas Cruz shows a target with bullet holes. Cruz was charged with 17 counts of premeditated murder on Thursday, Feb. 15, 2018, the day after opening fire with a semi-automatic weapon in the Marjory Stoneman Douglas High School in Parkland, Fla. (Instagram via AP) 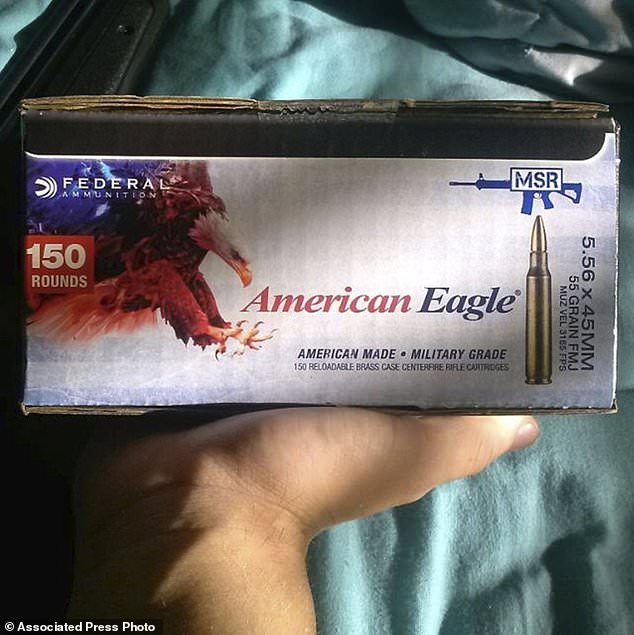 This photo posted on the Instagram account of Nikolas Cruz shows a box of bullets. Cruz was charged with 17 counts of premeditated murder on Thursday, Feb. 15, 2018, the day after opening fire with a semi-automatic weapon, in the Marjory Stoneman Douglas High School in Parkland, Fla. (Instagram via AP) 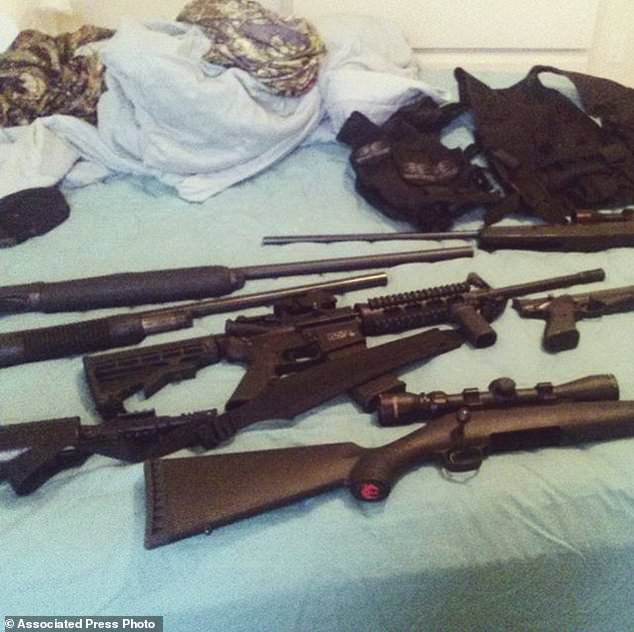 This photo posted on the Instagram account of Nikolas Cruz shows weapons lying on a bed. Cruz was charged with 17 counts of premeditated murder on Thursday, Feb. 15, 2018, the day after opening fire with a semi-automatic weapon in the Marjory Stoneman Douglas High School in Parkland, Fla. (Instagram via AP) 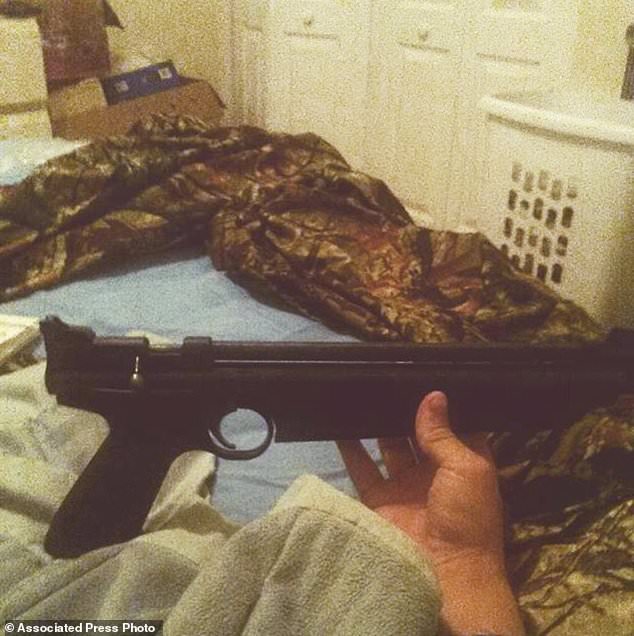 This photo posted on the Instagram account of Nikolas Cruz shows a weapon being held. Cruz was charged with 17 counts of premeditated murder on Thursday, Feb. 15, 2018, the day after opening fire with a semi-automatic weapon in the Marjory Stoneman Douglas High School in Parkland, Fla. (Instagram via AP) 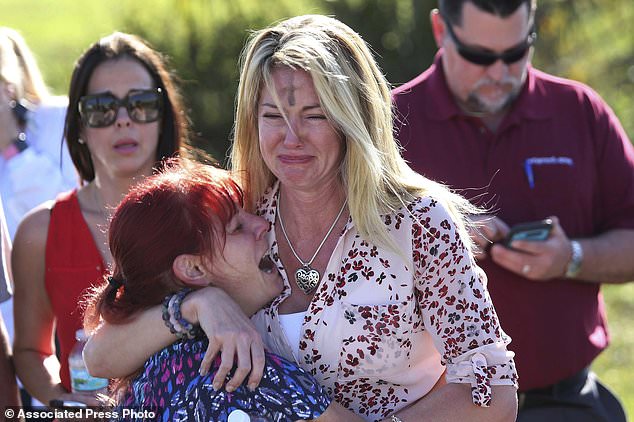 Parents wait for news after a reports of a shooting at Marjory Stoneman Douglas High School in Parkland, Fla., on Wednesday, Feb. 14, 2018. (AP Photo/Joel Auerbach) 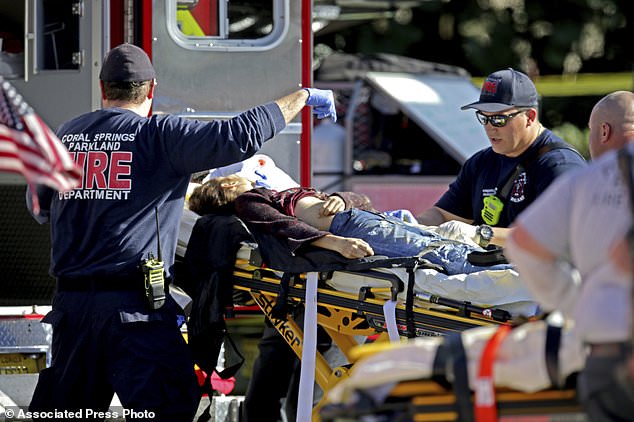 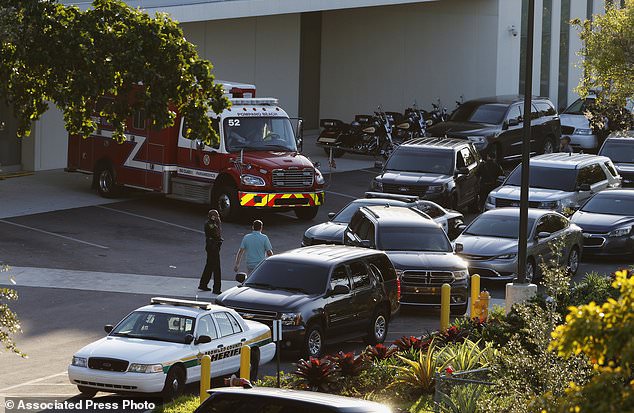 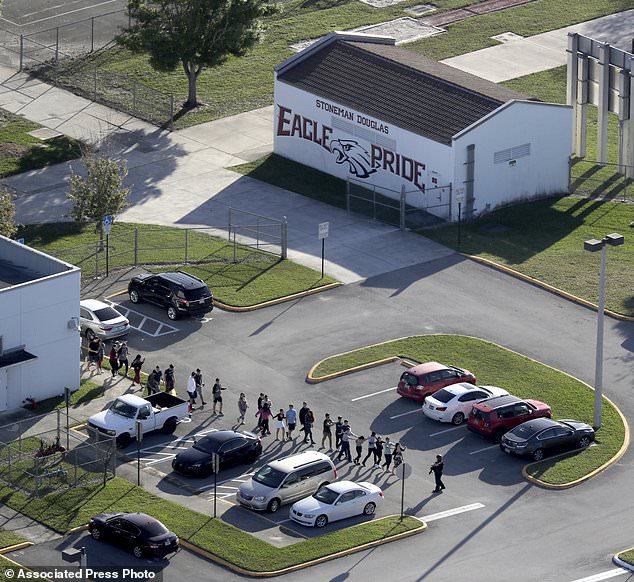 CORRECTS SPELLING TO MARJORY NOT MARJORIE Students are evacuated by police from Marjory Stoneman Douglas High School in Parkland, Fla., on Wednesday, Feb. 14, 2018, after a shooter opened fire on the campus. (Mike Stocker/South Florida Sun-Sentinel via AP)