Sen. Elizabeth Warren lashed out at billionaire candidates – and candidates who ‘suck up’ to billionaires as she visiting polling places on the day of the New Hampshire primary.

‘That’s one of the big questions here, how is our democracy going to work going forward – do you have to either be a billionaire or suck up to a billionaire in order to get the Democratic nomination?’ she asked a pack of reporters gathered around her Tuesday.

Warren was likely taking aim at former New York City Mayor Michael Bloomberg who is shooting up in national polls.

A Monmouth University poll released Tuesday of voters nationwide had Warren tied with former South Bend Mayor Pete Buttigieg for third place among the Democratic contender with 13 per cent support each.

Bloomberg was right behind them, earning 11 per cent support from Democrats and Democratic leaning voters.

Sen. Elizabeth Warren blasted ‘billionaire’ candidates and candidates who ‘suck up’ to billionaires as she made polling place stops in New Hampshire on Tuesday 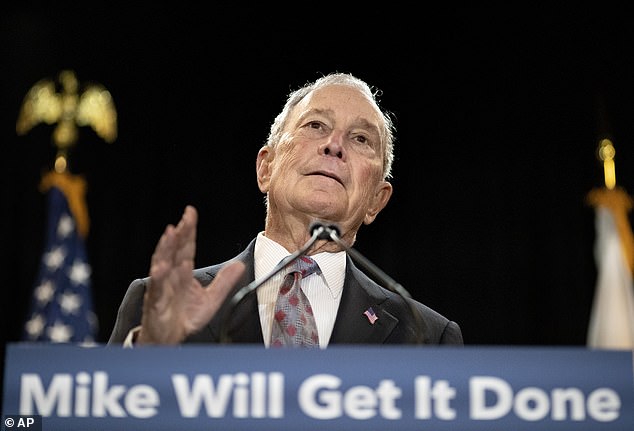 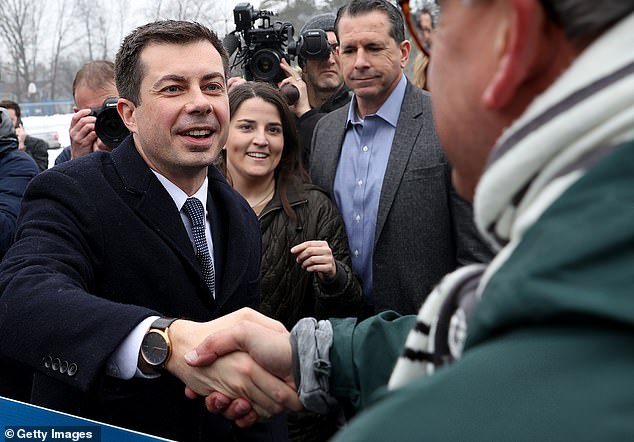 But she could also be referencing Pete Buttigieg who she’s criticized for taking donations from billionaires. Warren’s campaign manager sent out a memo to supporters Tuesday to explain how she could went the nomination, but it doesn’t consider Buttigieg’s ascent a factor

While New Hampshire votes today, Bloomberg’s not even on the ballot – though earned some write-in votes in the Granite State already.

Warren could also be talking about Buttigieg who bested her in the Iowa caucuses. She’s gone after him for taking money from billionaire donors and hosting a high-dollar fundraiser in a ‘wine cave’ in California’s Napa Valley.

Billionaire Tom Steyer is also in the race, though has been polling in the single digits.

Warren’s criticism comes as reporters asked the Massachusetts senator about her campaign’s longevity.

‘And remember, when I made the decision at the beginning not to spend 70 per cent of my time sucking up to billionaires and corporate executives and lobbyists and instead to fund my campaign through grassroots, it gave me more time to do town hall,’ she continued. ‘So I have already done town halls in 29 states and Puerto Rico.’

Also on Tuesday, her campaign manager Robert Lau sent out a nearly 2,000 word memo to supporters to explain how she can still win the race.

The New York Times obtained a copy of the memo, which described Sanders – who willl likely win Tuesday’s New Hampshire primary – as having a ‘ceiling,’ meaning he’ll only be able to achieve a certain level of support.

The memo also predicted Biden’s campaign collapsing, though didn’t take into account Buttigieg gaining steam. Instead it suggested that the former South Bend mayor would lose ground once the primary races were held in more diverse states.

‘If the early states deliver mixed results for the field, and no seismic event shakes up the top three, the remaining viable candidates for the Democratic nomination as of Super Tuesday will be Joe Biden, Bernie Sanders, and Elizabeth Warren,’ the memo said.

Warren came in third place in Iowa – after Buttigieg and Buttigieg just about tied for first.

It was a strong showing for the first-time presidential candidate, and Warren topped that off with a solid New Hampshire debate performance.

But Warren’s narrative of good-enough has not gotten her much media attention in New Hampshire, compared to the narrative of a dueling 38-year-old mayor and 78-year-old democratic socialist, especially with expected frontrunner Vice President Joe Biden’s campaign faltering.

In Iowa, Biden came in fourth.

The Real Clear Politics polling average on New Hampshire primary day had Klobuchar with 11.7 per cent – third in the race, behind Sanders and Buttigieg, and Warren tied with Biden at 11 per cent in the Granite State.