Two men have been killed by a tribe of warring monkeys after the primates caused part of a house to collapse on to them in northern India.

Laxman Tulisiani, a gold dealer and owner of the house, and a labourer named only as Veera, were killed in the city of Agra on Monday evening.

Police said the pair were inspecting the dilapidated property which was under construction and was due to have a wall on the third flood removed.

Tulisiani and Veera was standing underneath the wall on the second floor of the property, when a mass brawl suddenly broke out between 35 monkeys.

The fighting primates knocked into the wall, causing it to collapse and fall 10ft on to the men below, Indian news agency IANS reported.

Rescuers managed to pull the pair from the rubble and they were taken to a nearby medical centre, but both were pronounced dead from head injuries.

It is not the first time that monkeys have killed people in Agra.

In November last year, two fatal attacks claimed the lives of a 12-day-old baby and a 58-year-old woman.

During the first attack, a troop of monkeys broke into a woman’s home while she was breastfeeding her child in the Kachhara area, and snatched the baby away from her.

Locals chased the monkey which was carrying the infant and tried to tempt it with food, but it bit the child as people approached before fleeing.

The baby was rushed to a nearby hospital, but was pronounced dead on arrival. 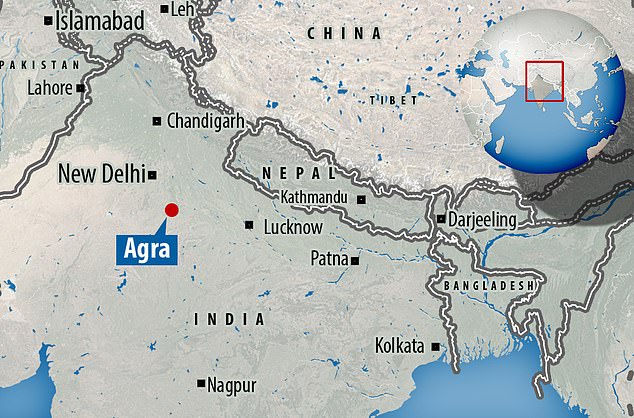 Home owner Laxman Tulisiani and labourer Veera were inspecting a property under construction the the city of Agra on Monday evening, when they were killed

In the second attack, a 58-year-old woman was bitten by monkeys as she went to relieve herself outside her home on the outskirts of the city at night.

She was set upon by a group of monkeys who left her ‘bleeding profusely’ through a series of bite wounds.

She was taken to hospital, but later died from her injuries.

Tourists in Agra, which contains the Taj Mahal, have also been attacked by the monkeys in recent years, while locals complain of frequent, non-lethal encounters.

Agra is home to thousands of rhesus macaques whose population has been soaring thanks to the abundance of food that is typically thrown their way by tourists and locals who venerate them because of their links to Hinduism.

However, as their population has increased so have territorial disputes and violent encounters with humans.

The monkeys have also seen large portions of their natural habitat destroyed by the expanding city, forcing them into close contact with one-another.

City workers have attempted to curb the population boom by relocating some monkeys to the countryside and sterilising others, though efforts have so-far proved largely ineffective.