Simcha Rotem, an Israeli Holocaust survivor who was among the last known Jewish fighters from the 1943 Warsaw ghetto uprising against the Nazis, has died at the age of 94.

Rotem, who went by the underground nickname ‘Kazik,’ took part in what is widely considered the single greatest act of Jewish resistance during the Holocaust.

Though guaranteed to fail, the Warsaw ghetto uprising symbolised a refusal to succumb to Nazi atrocities and inspired other resistance campaigns by Jews and non-Jews alike.

Rotem, who died in Israel on Saturday after a long illness, helped save the last survivors of the uprising by smuggling them out of the burning ghetto through sewage tunnels.

The Jewish fighters battled for nearly a month, fortifying themselves in bunkers and managing to kill 16 Nazis and wound nearly 100.

Simcha Rotem (pictured in 2014), an Israeli Holocaust survivor who was among the last known Jewish fighters from the 1943 Warsaw ghetto uprising against the Nazis, has died at the age of 94 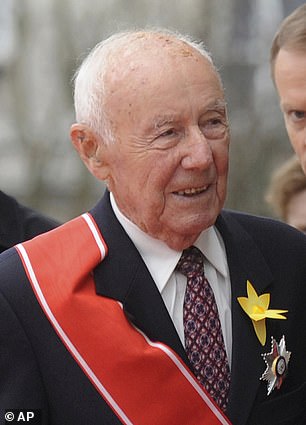 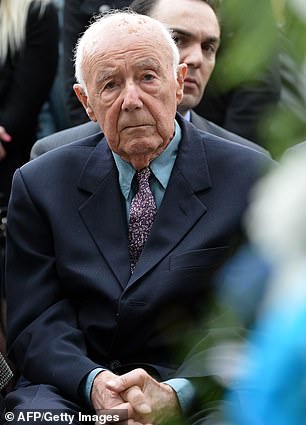 Rotem (pictured), who went by the underground nickname ‘Kazik,’ took part in what is widely considered the single greatest act of Jewish resistance during the Holocaust 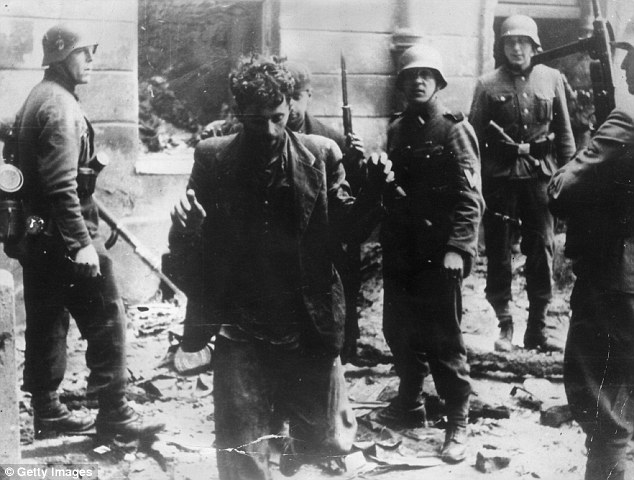 Battle of honour: A Jewish rebel is seen leaving a house surrounded by German soldiers inside the Warsaw Ghetto, during the uprising that peaked during April and May 1943

‘This is a loss of a special character since Kazik was a real fighter, in the true sense of the word,’ said Avner Shalev, chairman of the Yad Vashem Holocaust memorial in Jerusalem. ‘The challenge for all of us now is to continue giving meaning to remembrance without exemplary figures like Kazik.’

Rotem was born in 1924 in Warsaw, at a time when its vibrant Jewish community made up a third of the city’s population.

After World War II broke out, he was wounded in a German bombing campaign that destroyed his family home.

His brother and five other close relatives were killed. Shortly after, the city’s Jews were herded into the infamous ghetto.

The ghetto initially held some 380,000 Jews who were cramped into tight living spaces, and at its peak housed about a half million. Life in the ghetto included random raids, confiscations and abductions by Nazi soldiers. Disease and starvation were rampant, and bodies often appeared on the streets. 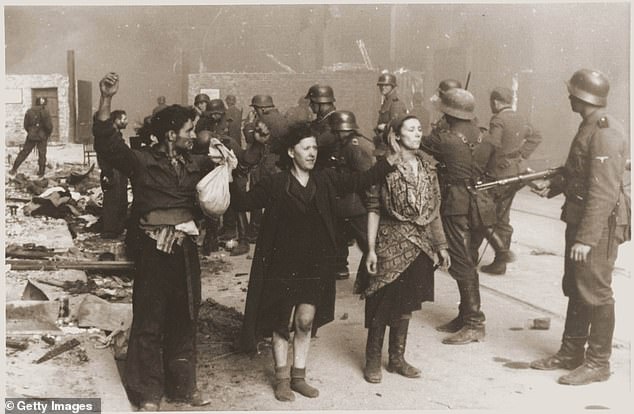 The Jewish fighters battled for nearly a month, fortifying themselves in bunkers and managing to kill 16 Nazis and wound nearly 100. Pictured: Nazi SS troops guard members of the Jewish resistance captured during the Warsaw ghetto uprising in 1943

The resistance movement began to grow after the deportation of July 22, 1942, when 265,000 men, women and children were rounded up and later killed at the Treblinka death camp.

As word of the Nazi genocide spread, those who remained behind no longer believed German promises that they would be sent to forced labour camps.

A small group of rebels began to spread calls for resistance, carrying out isolated acts of sabotage and attacks. Some Jews began defying German orders to report for deportation.

The Nazis entered the ghetto on April 19, 1943, the eve of the Passover holiday. Three days later, the Nazis set the ghetto ablaze, turning it into a fiery death trap, but the Jewish fighters kept up their struggle for nearly a month before they were brutally vanquished.

The teenage Rotem served as a liaison between the bunkers and took part in the fighting, before arranging for the escape of the few who did not join revolt leader Mordechai Anielewicz in the command bunker on 18 Mila Street for the final stand.

The Nazis and their collaborators ultimately killed 6 million Jews before the Allies’ victory in World War II brought an end to the Holocaust. 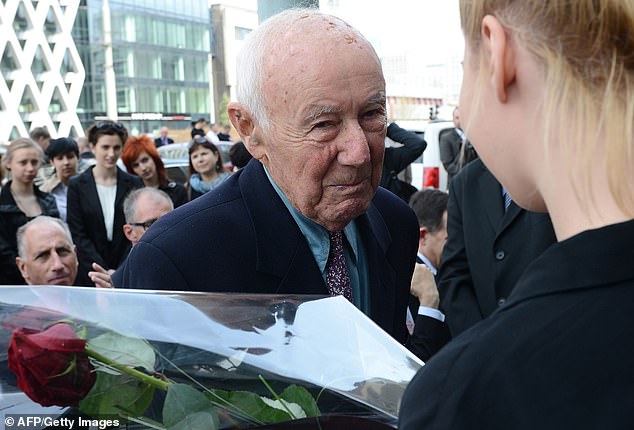 Rotem, who died in Israel on Saturday after a long illness, helped save the last survivors of the uprising by smuggling them out of the burning ghetto through sewage tunnels

After the war, Rotem immigrated to pre-state Israel and fought in its war of independence.

He was later an active speaker and member of the Yad Vashem committee responsible for selecting the Righteous Among the Nations, non-Jews who risked their lives to save Jews during the Holocaust. In 2013, on the revolt’s 70th anniversary, he was honored by Poland for his role in the war.

While the world marks International Holocaust Remembrance Day on January 27, the date of the liberation of the Auschwitz death camp, Israel’s annual Holocaust memorial day coincides with the Hebrew date of the Warsaw ghetto uprising – highlighting the role it plays in shaping the country’s psyche.

Even the day’s official name – ‘Holocaust and Heroism Remembrance Day’ – alludes to the image of the Jewish warrior upon which the state was founded. The valiant ghetto battle offered a powerful contrast to the image of feeble Jews being marched to their deaths in Nazi camps.

‘Kazik fought the Nazis, saved Jews, immigrated to Israel after the Holocaust, and told the story of his heroism to thousands of Israelis,’ said Prime Minister Benjamin Netanyahu. ‘His story and the story of the uprising will forever be with our people.’

Rotem is survived by his two children and five grandchildren.

With his passing, there is only a single known remaining Warsaw ghetto uprising survivor left in Israel – 90-year-old Aliza Vitis-Shomron.

Her main task in the ghetto had been distributing leaflets and smuggling weapons before she was ordered to escape and tell the world of the Jews’ heroic battle.

She said news of Rotem’s death brought tears to her eyes.

‘It’s a difficult day because this really means that this is it. I’m the only one left and there is no one else to keep the story alive,’ she told The Associated Press.

‘He was the last fighter. I’ll keep speaking till my last day, but no one lives forever. After me, who will keep telling?’

During the Second World War as many as 400,000 Polish Jews were crammed into the confines of the Warsaw Ghetto.

Within its walls they lived under the shadow of rampant disease and starvation, even before German troops began transporting Jews en masse to the Treblinka extermination camp.

The seeds were sown for the Warsaw Ghetto uprising in January 1943, when German soldiers arriving to implement a second deportation of Jews to the camp were met by Jewish resistance fighters who engaged them in clashes.

The deportation was halted after a period of days and saw 5,000 – rather than the intended 7,000 – Jews taken away. 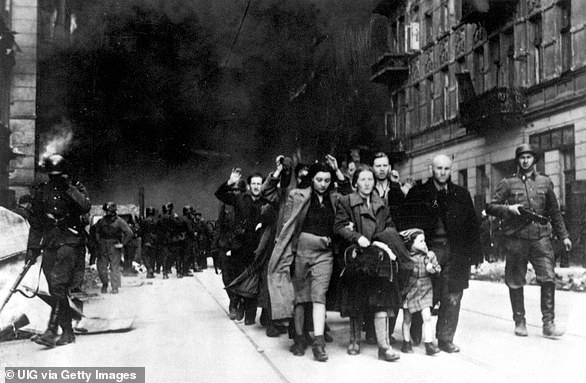 The occupants of the ghetto were ready to fight what was regarded as a battle of honour for the Jewish people, led by two resistance organisations; the ZZW and the ZOB.

On April 19, 1943 the police and SS auxiliary forces entered the ghetto for a further deportation action intended to last three days.

They were ambushed by Jewish insurgents firing and tossing Molotov cocktails and hand grenades from alleyways, sewers, and windows.

The Germans suffered casualties and their advance was halted.

German forces resorted to systematically burning down the ghetto, building by building, prompting thousands of surviving Jews and fighters to take cover in underground bunkers or the sewer system.

Many were forced out of their hiding places by troops who dropped in smoke bombs.

On May 8, the Germans discovered a large dugout located at Miła 18 Street, which served as ŻOB’s main command post. Most of the organisation’s remaining leadership and dozens of others committed a mass suicide by ingesting cyanide.

The suppression of the uprising officially ended on May 16, 1943, with the demolition of the Great Synagogue of Warsaw.