A lonely teenager became a cold-blooded killer because he was suffering from the crippling psychological effects of being abandoned by his father, experts claim.

Schoolboy Michael Hamer, 14, killed 11-year-old cystic fibrosis sufferer Joe Geeling in a brutal attack in Bury, Greater Manchester, in March 2006, after luring the younger pupil back to his house with a letter purporting to be from the deputy headteacher.

He then subjected the boy, with whom he is believed to have had a ‘sexual obsession’, to a sustained attack, hitting him over the head with a frying pan before stabbing him 16 times. Hamer then dumped the body in a wheelie bin in a nearby park.

In TV show Killer Kids, experts put forward a theory that Hamer’s killer streak stemmed from a deep-rooted sense of shame and rejection that was born out of his father’s abandonment and later compounded by bullying at school.

The programme sees parenting expert Jo Frost meet criminologists and neurologists who examine whether Hamer, who is currently serving a life sentence, was born evil or if he became a product of his troubled childhood.

Killer: Michael Hamer, pictured, was just 14 when he murdered 11-year-old Joe Geeling at his home in Bury, Greater Manchester, after luring the younger pupil with a bogus letter 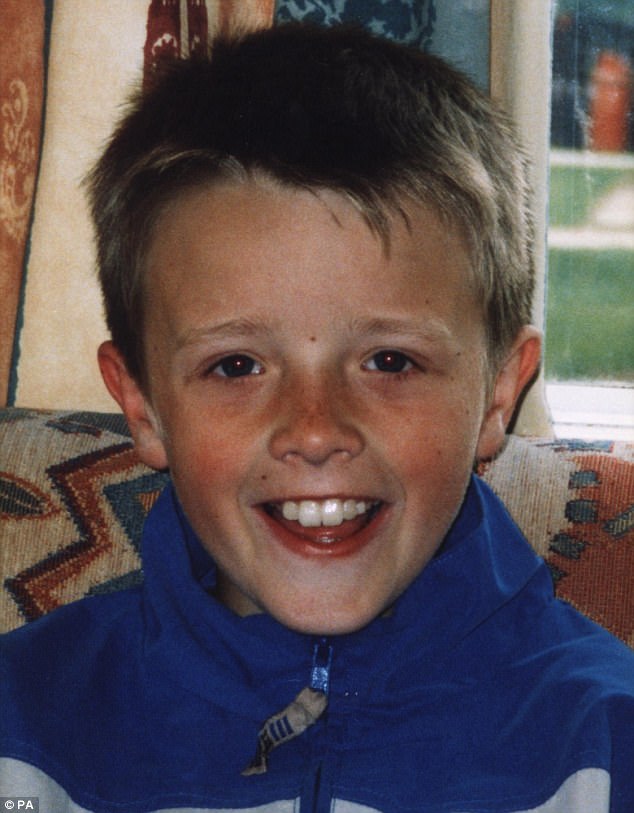 Victim: Cystic fibrosis sufferer Joe, pictured, was hit over the head with a frying pan and stabbed 16 times. His body was found dumped in a wheelie bin in a nearby park

Frost says: ‘Trust me when I tell you that I do understand how frustrating adolescence can be. In all my years of working with children I’ve never knowingly met one capable of murdering another. Was Michael Hamer born with a lethal trigger inside him or did society turn this 15-year-old into a child killer?’

Michael Hamer’s policeman father left before he was born, which lead to him becoming a quiet and withdrawn boy.

Experts believe that Hamer, now 24, suffered from an attachment disorder that came from being abandoned by his father.

Dr Elizabeth Yardley, a criminologist, explains in the film: ‘His dad’s abandoned him so we’ve got essentially an attachment issue here, he’s not forming those attachments with that caregiver. 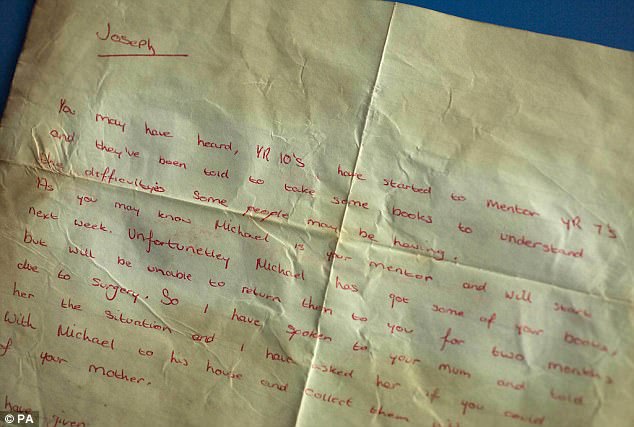 The letter: Hamer lured Joe back to his house with a hand-written letter, pictured, telling him he needed to go with him because he had been appointed his mentor. Teachers told Joe the letter was fake but he still followed Hamer back to his house, where he was later murdered

Hamer’s quiet nature led to him being bullied by his schoolmates, who would call him names and steal the money he’d been given for lunch.

Dr Yardley surmised that this was another factor that lead to Hamer becoming a killer.

What we’ve got at the core of Michael Hamer is a real sense of shame. We’ve seen the seeds sown for that in the family with his dad kind of rejecting him, then we’ve seen that reinforced in the school environment where the kids are picking on him

She said: ‘I think in this case what we’ve got at the core of Michael Hamer is a real sense of shame. We’ve seen the seeds sown for that in the family with his dad kind of rejecting him, then we’ve seen that reinforced in the school environment where the kids are picking on him. They’ve kind of picked up on the fact that there’s something a bit different about him and they’ve started targeting him.

‘Everywhere he turns he seems to be rejected; in the family, in the school environment, amongst his peers. He never really seems to find the place where he belongs, where he fits in.’

Hamer is said to have a developmental disorder and began hanging around with younger children, including Joe Geeling, who was in year seven at the time.

‘Sexual obsession’: Hamer made a sexual pass that was rejected by Joe, pictured, who told him he’d tell the school he was gay. It was then that he was murdered

Experts believe that Hamer connected with a young group because they were at the same developmental age as him, but it has been suggested that he was sexually fixated on Joe.

On March 1 2006, Hamer gave Joe a letter instructing him to come home with him as part of a fake mentoring scheme.

Despite teachers telling him the scheme was fake, Joe still went back to Hamer’s home, where the older boy made a sexual pass at him.

Joe rejected him and told Hamer that he’d tell the whole school he was gay, which made him lash out.

Hamer hit Joe over the head with a frying pan so hard that it broke. He then ran downstairs and brought back a kitchen knife, which he used to stab Joe to death 16 times. 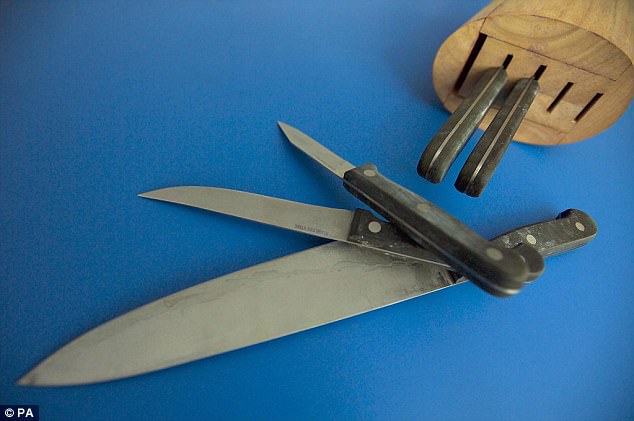 Weapons: The knives used to kill schoolboy Joe Geeling. Experts believe Hamer felt a deep-rooted rejection after being abandoned by his father before birth

Hamer put Joe’s body in a wheelie bin and wheeled him to a nearby park, where he would be found the next morning.

A neurologist believes that Hamer’s killer streak may have been as a result of biology, and not his upbringing.

Professor Francesca Happé said: ‘One theory of what’s going on in adolescence is that the limbic, the emotional brain has matured and is really active, really full of desires and your frontal lobe hasn’t developed yet so it’s not able to reign in that emotional brain, so you get risk taking, impetuous behaviour.’

Hamer, now 24, was sentenced to life, with a minimum of 12 years – a tariff later increased to 15 years by the Court of Appeal.

Last year he had his early release plea rejected by a judge, meaning he will stay in prison until at least March 2021. 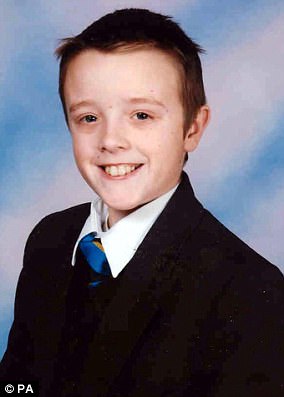 Experts believe Michael Hamer’s loneliness led him to seek friendship from younger boys, and he began to fantasise about having power over them in the way that his bullies had power over him.

School timetables and registers found in his bedroom and on his computer revealed the names of boys over whom he was dreaming of having control.

In the weeks leading up to the murder, Michael Hamer had been devising a means of persuading the younger boy to follow him home, in a case which drew comparisons with the notorious murder of Jamie Bulger.

One draft version of the letter he was eventually to give to Joe Geeling revealed his intention of having sex with the 11-year-old.

On the day of his death Joe was given a bogus letter in which Hamer was supposedly named as his new ‘mentor’ by the deputy head teacher. It told him to go to Hamer’s house that night.

Teachers told Joe the letter was a fake and instructed him to go straight home after school but the schoolboy went to Hamer’s instead. 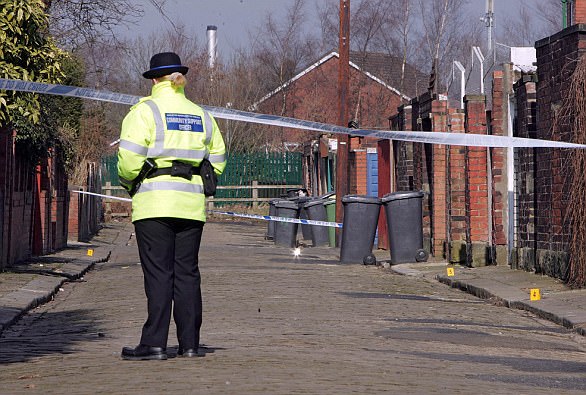 Investigation: Police outside the home where Hamer murdered Joe in March 2006

Once inside, Hamer made a sexual pass at Joe, who is understood to have called him ‘gay’ and threatened to tell others what he had done.

Hamer then stabbed his victim 16 times and repeatedly battered him with a frying pan.

He then put Joe’s body in a wheelie bin and dragged it half a mile to bury it in a park before returning home to calmly complete his homework, turning up for school the next day as if nothing had happened.

Joe’s body was discovered that day and teachers realised the terrible significance of the letter. Less than an hour after being pulled out of a lesson to be questioned, Hamer had been arrested.