The American man who was infected with China’s new virus came into close contact with at least 16 people before he was put in isolation, according to health officials.

The unnamed Washington man, who is in his 30s, had his illness publicly confirmed on Tuesday, January 21, making him the first Westerner to be infected.

Officials in the US now say he may have encountered – and therefore potentially infected – 16 or more people in America since catching the bug.

He wasn’t diagnosed until Monday, January 20, after returning home from China five days earlier and becoming ill later that week.

A total of 581 people were confirmed to have caught the coronavrius and 17 had died by 08.30GMT today.

But scientists estimate the true number of people infected since the outbreak begun in December is in the thousands, possibly higher than 9,000.

It has been proven to spread between people, likely in a similar way to how colds spread, but experts don’t yet know how quickly this can happen. 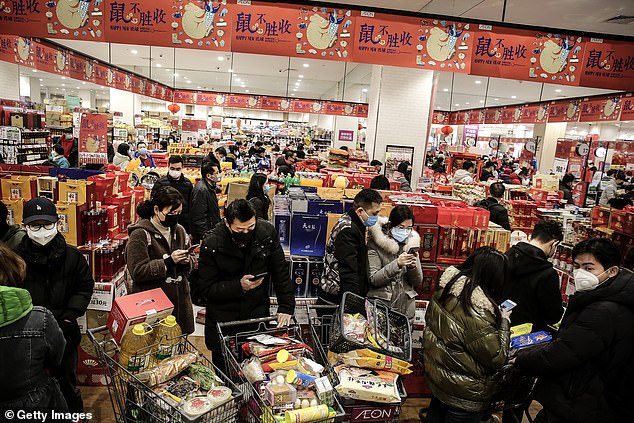 The Chinese city of Wuhan, where the outbreak begun and all 17 deaths have happened, is now on lockdown and residents have been told not to leave the city unless in an emergency (Pictured: People shopping in Wuhan today, January 23)

Health authorities in the US said they will be contacting everyone who came into contact with the US patient to check whether they have fallen ill.

The man himself is said to be in good condition and recovering in a hospital near Seattle.

Washington state’s health secretary, John Wiesman, said: ‘All the close contacts will be part of what we call “active monitoring”,’ CBS News reported.

‘That means that a public health worker will call the person daily to do a symptom check for them, see if they have a fever, cough, any respiratory issues.

‘And should anyone develop symptoms at any point in time, these people who are under monitoring will be instructed to immediately call a public health worker to report the symptoms, and then we would help facilitate a medical evaluation.’ 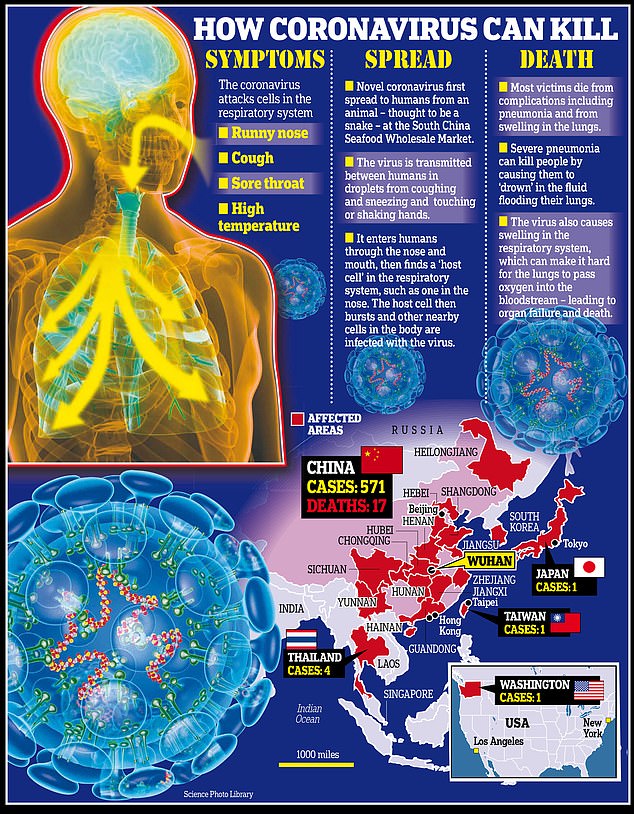 Chinese authorities say 17 people have died and more than 500 have been infected, air and rail departures from Wuhan are suspended from January 23

The chief medical officer at Providence Regional Medical Center in Everett, Washington, said he had visited the man yesterday and that he was ‘resting comfortably’.

‘I had the opportunity to go by the unit early this morning, the patient was asleep, so I didn’t wake him up, but the staff reported that he had a really good night,’ Dr Cook told CBS.

So far, people suspected or confirmed to have the coronavirus have been put into isolation as quickly as possible because nobody knows how contagious it is.

Potential patients in China have been pictured being moved around inside plastic whole-body tubes to keep health workers safe.

At least 20 medics have already become infected in Wuhan, the Chinese city where the outbreak began.

Wuhan, a city of 11million people, is now on lockdown and public transport has been halted and citizens told not to leave the city except in an emergency.

The UK Foreign Office has advised travellers to avoid the area and the Government last night set up special measures to screen people arriving at London Heathrow Airport on a direct flight from the city. 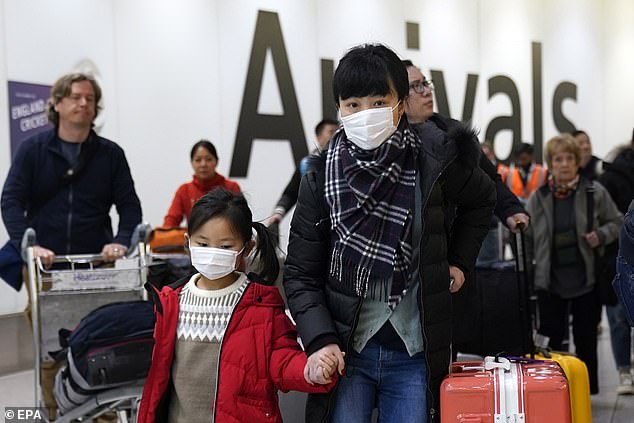 The respiratory virus was first detected in Wuhan, China, and can be passed between humans. Pictured: Passengers arrive wearing masks at Terminal 4, Heathrow Airport, January 22 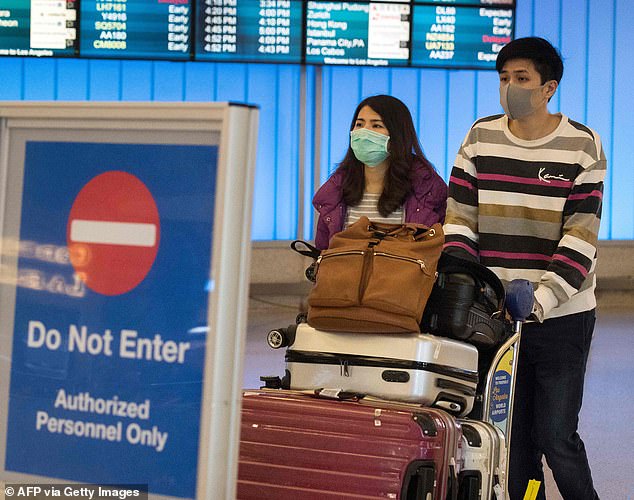 Airports in the US are setting up screening for patients arriving from Wuhan in China. Pictured: People wearing masks as they arrived at Los Angeles International Airport yesterday, January 22

All direct flights to the US from Wuhan have been rerouted to LAX, San Francisco, JFK, Chicago O’Hare and Hartsfield-Jackson airports where passengers will be screened.

President Donald Trump said earlier this week that the US ‘has it totally under control’, adding ‘we do have a plan, and we think it’s going to be handled very well.’

The patient in Washington, who lives in Snahomish County, had travelled from Wuhan but did not visit any of the markets at the epicenter of the outbreak, according to state health officials.

He did not fly directly home from Wuhan, but arrived on January 15, the day before screening was in place and before he developed symptoms.

He reportedly recognized his own symptoms – which typically include cough, fever and runny nose – after seeing online coverage of the virus.

The patient reached out to doctors on January 16, was tested on the 17th and his diagnosis was confirmed on Monday 20, health officials said.

WHAT IS THE NEW CORONAVIRUS SPREADING OUT OF CHINA?