A Washington state man has been found guilty of murdering a young Canadian couple in 1987.

Talbott wasn’t arrested until last year, when authorities said they used a genealogy website to identify him as the person who left his DNA on one of the victims.

The former truck driver, from Seattle-Tacoma, was found guilty of two counts of first-degree murder.

When he is sentenced on July 24, he will likely be facing life in prison.

William Talbott II, 56, of Seattle-Tacoma, Washington, was found guilty on two counts of first-degree murder on Friday. Pictured: Talbott is helped to a wheelchair by Snohomish County Sheriff’s Deputies after being found guilty 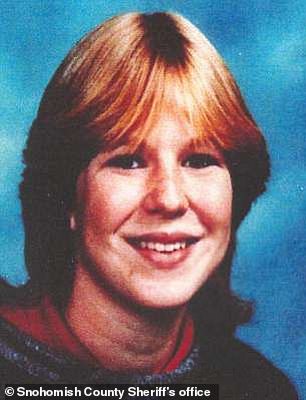 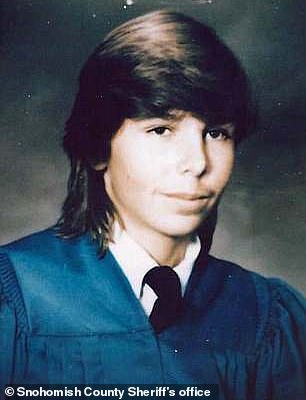 He was convicted in the killings of Tanya Van Cuylenborg, 18 (left), and her boyfriend Jay Cook, 20 (right), in November 1987. The couple, from Saanich, British Columbia, were on an overnight trip to Seattle when they were found dead

Prosecutors said that, on November 18, 1987, Van Cuylenborg and Cook were driving a van from their hometown of Saanich, in, British Columbia, to Seattle for an overnight trip.

When they didn’t return, their families began a frantic search for them, including renting a plane to try to spot the copper-colored Ford van they had been driving.

About a week later, Van Cuylenborg’s body was found down an embankment in rural Skagit County, north of Seattle.

She was naked from the waist down and had been shot in the back of the head.

Hunters found Cook dead two days later in brush near a bridge over the Snoqualmie River in Monroe, about 60 miles from where his girlfriend was discovered.

He had been beaten with rocks and strangled with twine and two red dog collars, authorities said.

The couple’s van was found in Bellingham, Washington, near a bus station. Van Cuylenborg’s pants were in it, and investigators found semen on the hem. 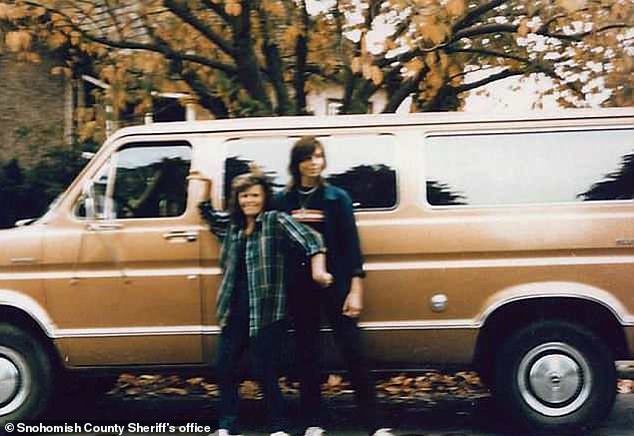 The couple’s van was found in Bellingham, Washington, near a bus station. Van Cuylenborg’s pants were in it, and investigators found semen on the hem. Pictured: Van Cuylenborg,and Cook in front of their van 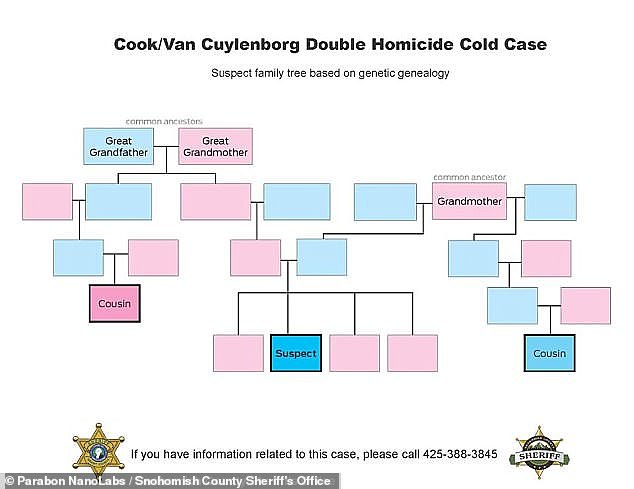 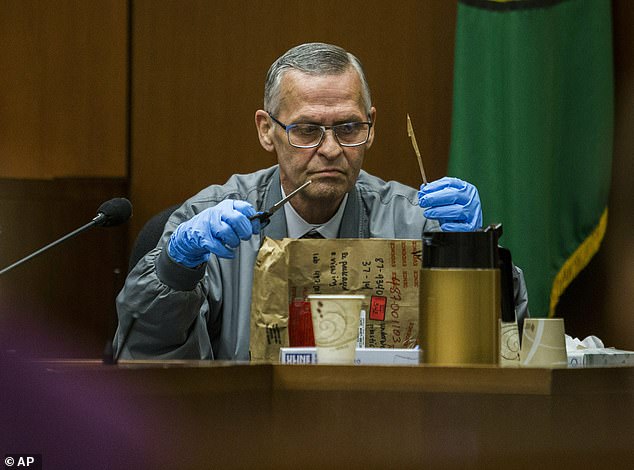 When Talbott was named a suspect, investigators began trailing him, saw him discard a coffee cup (pictured), and tested the DNA from the cup – and found it matched the DNA found at the crime scene.

Snohomish County deputy prosecutor Matt Baldock said in court that their families may never know specifics of what happened. But he argued that the question of who did it was answered.

A genealogist, Cece Moore, used a public genealogy site, GEDMatch, to find distant relatives of the man who left his DNA behind.

She determined from the family tree she built that the suspect was likely the male child of William and Patricia Talbott of Monore, Washington, reported KOMO News.

Talbott II was their only male son and 24 at the time of the murders. 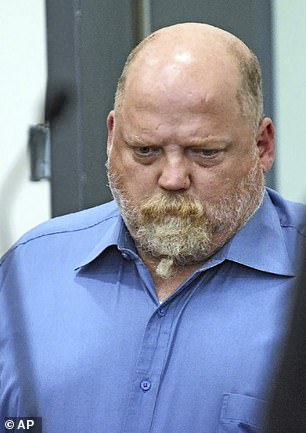 When Talbot (pictured, May 2018) is sentenced on July 24, he will likely be facing life in prison

Investigators began trailing him, saw him discard a coffee cup, and tested the DNA from the cup – and found it matched the DNA found at the crime scene.

The same process has been used to make dozens of arrests in cold cases, perhaps the most famous being that of Joseph James DeAngelo, the so-called Golden State Killer.

The defense suggested Talbott’s semen could have ended up at the crime scenes – on pants in the van, and on Van Cuylenborg – from consensual sex.

‘They never stopped to consider that perhaps the person who left the DNA was not the murderer,’ Forde said.

But prosecutors that the semen is proof that Talbott raped Van Cuylenborg.

‘Under what circumstances does the defendant end up in the back of the van for a consensual sexual encounter with Tanya? Where’s Jay? What does he think about it?” said Snohomish County Deputy Prosecutor Matt Baldock, according to KIRO 7.

The Herald reported that after the guilty verdict was read, Talbott gasped and was pushed out of the courtroom in his wheelchair.