Watch the amazing moment the moon photobombs the sun

NASA’s sun-monitoring spacecraft has captured the remarkable moment the moon carried out a lunar transit, effectively photobombing the sun.

The moon blocked out more than a quarter of the sun at the height of its 45-minute journey on October 19, according to NASA.

With no atmosphere to distort the view, the moon appears a crisp shadow over the face of the sun, before it disappears back out of sight.

NASA’s sun-monitoring spacecraft has captured the remarkable moment the moon carried out a lunar transit, effectively photobombing the sun

The Solar Dynamics Observatory (SDO) is a Nasa mission that has been observing the sun since it launched on February 11, 2010.

The goal of the SDO is to understand the influence of the sun on the Earth and near-Earth space.

It does this by studying the solar atmosphere on small scales of space and time and in many wavelengths at the same time.

The lunar transit spotted by the Solar Dynamics Observatory occurred between 3:41 and 4:25 p.m. EDT according to NASA.

It can be seen appearing from the top left side of the image, crossing diagonally in front of the sun.

At its peak, the moon covered roughly 26 percent of the sun.

‘The Moon’s shadow obstructs SDO’s otherwise constant view of the Sun, and the shadow’s edge is sharp and distinct, since the Moon has no atmosphere which would distort sunlight,’ NASA explains.

‘SDO captured these images in a wavelength of extreme ultraviolet light that shows solar material heated to more than 10 million degrees Fahrenheit.’

As this kind of light is invisible to human eyes, it has been colorized in green for the photo, the space agency notes.

The Solar Dynamics Observatory keeps a constant eye on the sun, studying its atmosphere and effects on the near-Earth environment.

In September, it spotted the biggest solar flare seen for 12 years.

Two high-intensity solar flares were emitted, the second of which was the most intense recorded since 2005, the Space Weather Prediction Centre (SWPC) said.

The flares knocked out radio communications for one hour on the Earth’s side facing the sun, as well as low-frequency communications used in navigation. 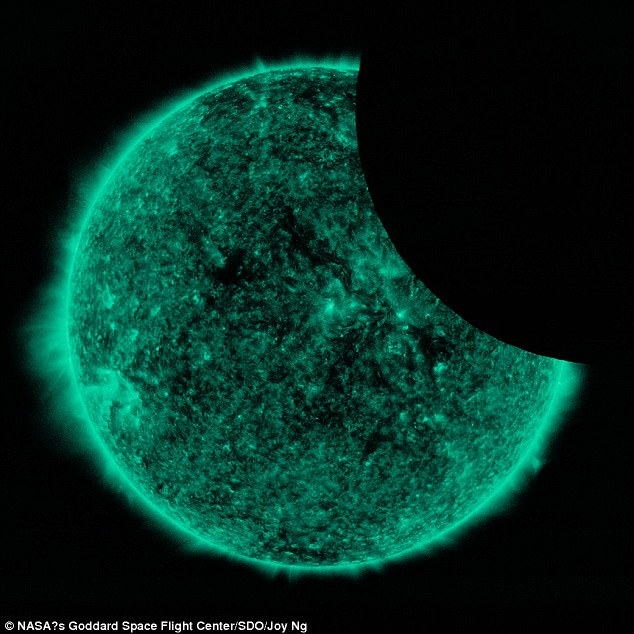 The lunar transit occurred between 3:41 and 4:25 p.m. EDT according to NASA. At its peak, the moon covered roughly 26 percent of the sun

At the time, experts predicted a coronal mass ejection (CME) triggered by the flares would arrive in the days to follow.

During the powerful eruptions in September, three X-category flares took place over the course of 48 hours, with each reaching energies comparable to one billion hydrogen bombs.

Scientists spotted one of these flares using the Swedish Solar Telescope in La Palma. Capturing ‘unheard of’ views of the event.

‘We can only observe about 1/250th of the solar surface at any one time using the Swedish Solar Telescope, so to be in the right place at the right time requires a lot of luck.

‘To observe the rise phases of three X-classes over two days is just unheard of.’