NASA has shared a baffling new animation showing ‘a twist’ in the typical lunar transit.

Thanks to the movement of its Solar Dynamics Observatory combined with that of the moon in orbit, the lunar shadow appears to reverse its direction as the moon travels in front of the sun.

The incredible phenomenon popped up in observations captured by SDO on March 6.

The sun is currently experiencing a period of unusual quiet as it approaches solar minimum; according to NASA, there were no visible sunspots in February at all.

WHAT IS THE SOLAR CYCLE?

The sun is a huge ball of electrically-charged hot gas that moves, generating a powerful magnetic field.

This magnetic field goes through a cycle, called the solar cycle.

Every 11 years or so, the sun’s magnetic field completely flips, meaning the sun’s north and south poles switch places.

The solar cycle affects activity on the surface of the sun, such as sunspots which are caused by the sun’s magnetic fields.

One way to track the solar cycle is by counting the number of sunspots.

The beginning of a solar cycle is a solar minimum, or when the sun has the least sunspots. Over time, solar activity – and the number of sunspots – increases.

The middle of the solar cycle is the solar maximum, or when the sun has the most sunspots.

As the cycle ends, it fades back to the solar minimum and then a new cycle begins.

It’s a bizarre effect that might leave many viewers scratching their heads.

But according to NASA, the phenomenon is simply the result of SDO’s changing perspective.

‘The moon’s apparent reversal is caused by SDO first overtaking the moon in its orbit, then the moon catching up as SDO swings around Earth’s dusk side,’ NASA explains.

‘During the transit the sun moves in the frame as the telescopes cool and flex in the lunar shadow.’

NASA’s SDO has been monitoring activity on the sun for nearly a decade.

The sun has been relatively quiet over the last few months as it approaches a phase in its cycle known as solar minimum.

According to NASA, there were no sunspots at all in the month of February – a phenomenon that hasn’t been observed since 2008.

But, that’s no cause for concern, the space agency insists.

‘Where have all the sunspots gone? Last month the total number of spots that crossed our Sun was … zero,’ NASA revealed on its Astronomy Picture of the Day blog.

‘Well below of the long term monthly average, the Sun’s surface has become as unusually passive this solar minimum just like it did 11 years ago during the last solar minimum.

According to NASA, the phenomenon of the reversing moon is simply the result of SDO’s changing perspective. This is illustrated in the animation above

‘Such passivity is not just a visual spectacle, it correlates with the Sun being slightly dimmer, with holes in the Sun’s corona being more stable, and with a reduced intensity in the outflowing solar wind.

‘The reduced wind, in turn, cools and collapses Earth’s outer atmosphere (the thermosphere), causing reduced drag on many Earth-orbiting satellites.’

NASA has long estimated that the sun would reach its minimum in 2019-2020, and the latest activity – or lack thereof – lines up with these predictions. 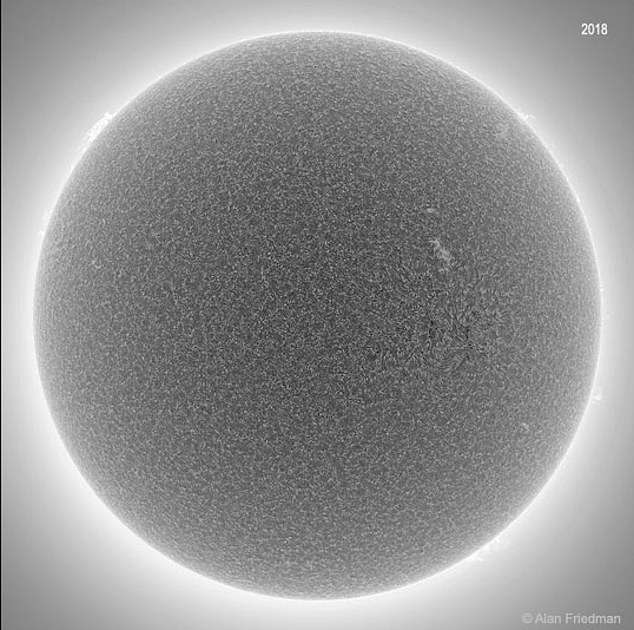 The sun is currently experiencing a period of unusual ‘quiet’ as it approaches solar minimum; according to NASA, there were no visible sunspots in February at all. Above, the sun can be seen this past August, already appearing nearly spot-free

The space agency is working to better understand the mechanisms behind solar activity with its recently-launched Parker Solar Probe, which began its second orbit of the sun back in January.

It will make its next closest approach to the sun on April 4.

‘We’ve always said that we don’t know what to expect until we look at the data,” said Project Scientist Nour Raouafi of APL. Said in January.

‘The data we have received hints at many new things that we’ve not seen before and at potential new discoveries. Parker Solar Probe is delivering on the mission’s promise of revealing the mysteries of our Sun.’