Watch this man play the saxophone during brain surgery

Two years ago, Dan Fabbio was a healthy 25-year-old man, working as a music teacher in New York, when his hearing started to go funny.

He went to a neurologist who told Fabbio that he had a benign egg-sized tumor on the right side of his brain.

A research team from the University of Rochester approached Fabbio and asked if he wanted to participate in an experimental procedure that would help them figure out which part of the brain processes music.

Fabbio agreed to undergo the experimental surgery and, while on the operating table having his brain tumor removed, he played a song he knew from memory on his saxophone.

This helped doctors make certain they had not damaged the part of Fabbio’s brain responsible for processing music. Fabbio recovered from his surgery completely and was able to resume teaching students music in his hometown.

Fabbio’s procedure was not the first of its kind. In 2014, a concert violinist from Minnesota performed while undergoing a brain surgery and, earlier this year, a 37-year-old man in India strummed his guitar during a brain operation.

And in June, a blogger posted online a video of her brain surgery, during which she was lucid. The video shows doctors testing the woman with flashcards – as she is being operated on – so that doctors could learn more about the seizures she had been having.

‘Awake brain surgeries’ are typically performed if a person has a tumor that is close to a part of the brain that controls vision, body movements or language. Removing these tumors while the patient is asleep can result in a significant function loss.

The University of Rochester team that worked with Fabbio is trying to learn more about brain mapping and their goal is to be able to tell doctors how a brain surgery patient will respond to an operation before they have it.

HOW MUSIC TEACHER DAN, 25, WAS DIAGNOSED WITH HIS EGG-SIZED BRAIN TUMOR

Dan Fabbio, a music teacher, found out he had a tumor at 25 years old

In the spring of 2015, Dan Fabbio was teaching music at schools in New Hartford, New York, while working towards getting his Master’s in music education.

‘He was a healthy, happy music teacher,’ said Dr Webster Pilcher, a neurosurgeon at the University of Rochester Medical Center.

That spring, something strange started happening to Fabbio, who had built his life around his passion for music.

For 30 seconds at a time, music would sound different. Fabbio would be listening to a piece of music and, all of a sudden, the notes would not sound right for a few seconds.

‘To him that was very profound,’ Dr Pilcher said.

The sensation Fabbio was experiencing was not specific to music: other sounds he was hearing were not registering in his brain the way he knew they ought to.

Fabbio went to a neurologist and found out that he had a type of tumor called a low-grade glioma, which was about the size of an egg, above his right ear.

‘I was 25 at the time and I don’t think there is any age when it is okay to hear that,’ Fabbio told researchers at the University of Rochester. He added: ‘I had never had any health problems before and the first thing my mind went to was cancer.’

The area of the brain that the tumor was pressing against is responsible for interpreting music.

‘Those events were really tiny seizures,’ Dr Pilcher said of the moments when, suddenly, sounds were not registering properly in Fabbio’s brain.

Dr Pilcher and Dr Brad Mahon, a professor of Cognitive Sciences at the University of Rochester, had been researching the way that human brains process music and Fabbio seemed like a perfect subject for them to study.

They had been researching the topic by studying MRIs of the human brain and mapping out which areas were responsible for processing certain activities, such as playing music.

‘All of the functions that make humans humans, we’ve mapped them,’ Dr Pilcher said.

Dr Pilcher and Dr Mahon wanted to watch Fabbio play the saxophone while he was under the knife to study the way the brain works while a person is playing music and to make sure that removing Fabbio’s tumor was not going harm the part of his brain that processes music.

‘We knew we would want him to play his saxophone in the operating room’ Dr Pilcher said.

Dr Mahon added: ‘When we went into this, we wanted him to have his musical instrument.’

The doctors approached Fabbio and asked him if he wanted to participate in their experiment.

Fabbio was enthusiastic about what his case could help the doctors figure out so he agreed. ‘Dan was absolutely on board,’ Dr Mahon said. 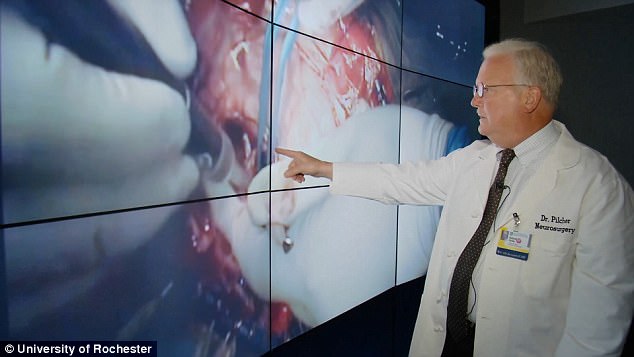 The medical team began preparing Fabbio for what would happen during his surgery. Fabbio would have to be positioned on his left side, unable to move an inch since his brain would still be exposed.

Dr Mahon helped Fabbio chose a song to play during his operation. He knew he needed to play something relatively short and something he knew from memory.

The two settled on a Korean song called Arirang which Fabbio was familiar with.

‘We trained him extensively,’ Dr Pilcher said. ‘He worked with us to develop and design some of the tests he would preform.’ He said that Fabbio’s curiosity ‘was able to really drive a lot of the scientific questions’ the team was asking.

Dr Mahon added: ‘He went into the surgery with a lot of preparation, a lot of practice.’

During the first part of the operation, Fabbio was sedated with an IV and part of his skull was removed.

Halfway through, the team took the IV out and Fabbio woke up. Fabbio was not able to feel any sensation in the top of his head when doctors woke him up.

The medical team engaged Fabbio in some testing to see if his brain was able to interpret music clearly, as Dr Pilcher stood poised above his exposed brains.

Then, the team handed Fabbio his instrument. Fabbio played Arirang as the medical team watched on, astonished.

Watchers in the operating room rejoiced as Fabbio finished the tune. ‘The tumor was gone and that part of his brain was preserved,’ Dr Pilcher said.

But about two weeks after the surgery, Fabbio experienced the same signs that had led him to a neurologist in the first place.

Fabbio noticed that his brain was not registering the sound that his electric toothbrush was making correctly. ‘His brain was back to his old tricks,’ Dr Pilcher said. 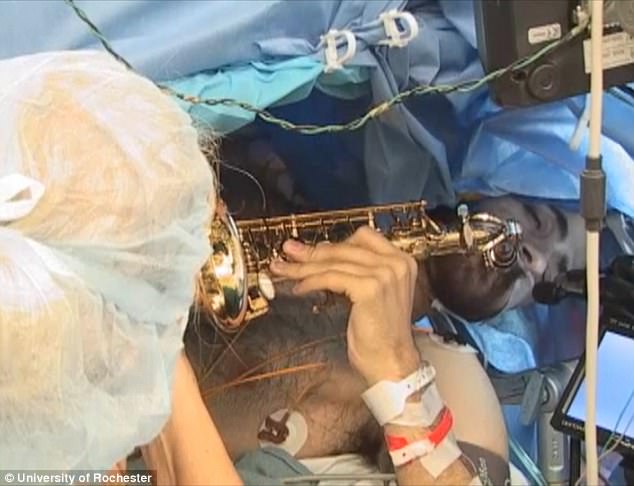 Fabbio agreed to participate in the experiment and, during his brain tumor removal surgery, Fabbio played the saxophone so that doctors could confirm that their operation was not harming the part of his brain that is responsible for processing music

However, to Fabbio’s relief, this only lasted a few weeks.

Dr Pilcher said that Fabbio’s symptoms were consistent with what other patients who have undergone brain surgery have dealt with in its aftermath.

He added that when this was happening, he explained to Fabbio that he would not be able to jog immediately after having a hip surgery.

Dr Pilcher said that brain surgery works largely the same way: it would take some time for Fabbio’s brain to function 100 percent correctly.

WHAT’S NEXT FOR THE BRAIN-MAPPING RESEARCHERS?

HOW DOES ‘AWAKE BRAIN SURGERY’ WORK?

There are three ways that ‘awake brain surgeries’ can be done:

Now, Dr Pilcher’s team, which has received funding from the National Institutes of Health, wants to continue developing their research on brain-mapping.

They want to continue to map the human brain and be able to give doctors more information about the areas of the brain they are cutting into when they remove tumors.

But there are some differences. Dr Mahon said that the part of the brain that interprets language in his brain could be located somewhere else in another person’s brain, if only off by two centimeters.

But those centimeters make a huge difference to a brain surgeon about to perform an operation.

‘We need to develop the abilities to see exactly where these parts are [in different people],’ Dr Mahon said.

Their team is also developing technologies that will tell doctors how a patient will react to a surgery.

They are creating software platforms in which doctors can simulate surgeries and, while they do so, the software they are using will tell them how their ‘patient’ would be doing three months after the hypothetical surgery.

Dr Mahon and Dr Pilcher are very excited about the impact their research can have on the neuroscience and cognitive sciences field.

Dr Mahon said that his research can help people with brain tumors get their lives back. ‘Patients can go back to their families,’ he said.

Dr Pilcher is hopeful about the research grants his team has received, saying: ‘The NIH is on the right track.’

‘The more we can learn about the brain – patient by patient – what an amazing opportunity that is,’ he said.