One penalty was thunderous, the other finessed, but it ensured this top six tussle ended with honours even.

Watford’s Troy Deeney was leaving absolutely nothing to chance with his spot-kick, awarded when Brentford defender Ethan Pinnock was adjudged pretty harshly to have brought down Ismaila Sarr in the box as their arms tangled and was shown a red card into the bargain. To compound matters, it appeared Sarr was offside as he raced through.

Deeney hammered the ball straight down the middle, almost through Brentford keeper David Raya who might have hurt himself had it hit him.

It seemed Watford, with their man advantage, would go on and win it. But moments later, Mathias Jensen’s cross was blocked by the elbow of Christian Kabasele and Brentford had their own penalty.

Ivan Toney, the Championship’s leading scorer, is an assured finisher. He eschewed Deeney’s power and went for placement, with the same outcome for his 16th of the league campaign.

It was enough to extend Brentford’s unbeaten run to a 12th game but really they might have been well clear before the penalty drama with Toney missing too golden chances.

Watford remain third in the table, but it should have been a better night having played over half-an-hour against 10 men.

The 2,000 fans inside Vicarage Road for the first time and also the last time in a while did their best to lift the tempo. They clapped along and shouted through face masks. Occasionally, someone banged on a drum. 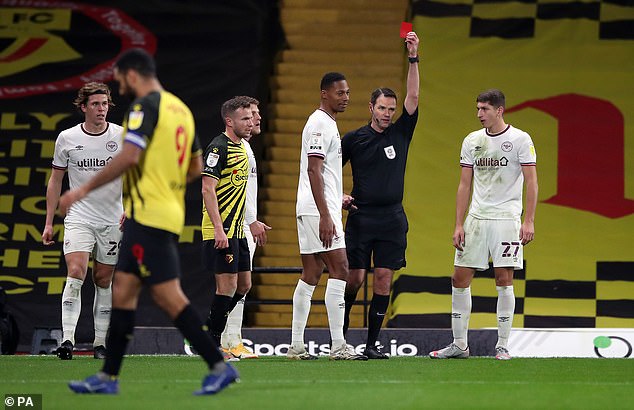 But the game was a stubborn slow-burner in the first-half with chances for either side at a premium.

Watford, who came into this one having lost just one of their last nine games, carved out the first half-chance. Troy Deeney seized the ball and played a reverse pass into Ken Sema on the left-side of the box. His low cross found Ismaila Sarr, who spun but couldn’t get enough power on his low shot to trouble David Raya.

Brentford, themselves 11 unbeaten before this and improving with every passing week, were spurred into life.

Ivan Toney, the Championship’s leading scorer, missed a sitter by his standards on 17 minutes. Bryan Mbeumo weaved down the right flank and swung in the perfect left-footed cross that found Toney standing unmarked between two yellow-shirted defenders. As though he couldn’t believe his luck, Toney headed wide from eight yards.

Brentford were soon attacking once more with Mbeumo playing a neat one-two with Sergi Canos before lifting a shot over. 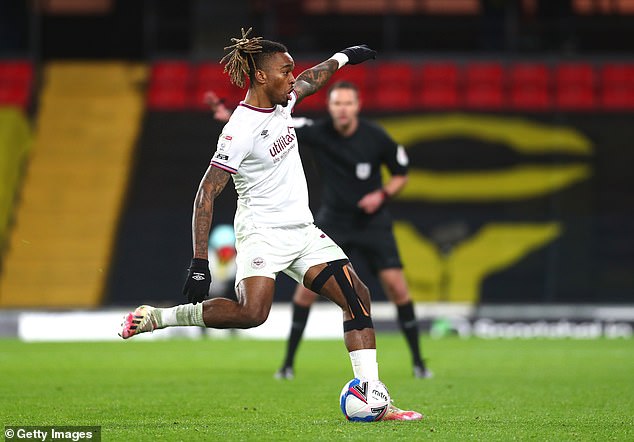 But there would be an even better chance for the visitors before half-time. Mads Sorensen picked out Toney in a pocket of space after Watford’s back line switched off. He had plenty of time to pick his spot with a curling shot which succeeded in beating Ben Foster but cannoned back off the inside of the post.

Quite often, Watford didn’t help themselves. Toney was allowed time and space to run into just before the break but instead of shooting from the edge of the box as he should have done, he played in Josh Dasilva who was forced wide.

Watford had offered little going forward. At one stage, their frustrated skipper Deeney dropped back deep into his own half to demand the ball. He attempted a ball down the line to Sarr but the winger failed to read it and it bobbled harmlessly out.

With that fresh in the memory, there were a few jeers and whistles from those in attendance as the whistle went.

The initial signs for Watford after the break were more promising. Tom Cleverley crashed a shot wide before Troy Deeney curled an effort into Raya’s gloves. Their new-found intensity pressured Brentford into uncharacteristic misplaced passes.

Eventually it forced the penalty though referee James Linington mistakenly dismissed Mads Sorensen before his assistant corrected him.

Brentford manager Thomas Frank, who’d screamed in the fourth official’s face when the penalty was awarded against his team, was later booked by Linington for further dissent.

It was Watford’s turn to be upset with the officials when substitute Stipe Perica nodded home Sarr’s cross only for an offside flag to cut short celebrations. Replays showed it was a marginal decision.

Vladimir Ivic threw on Andre Gray as Watford searched for a late winner but Brentford’s 10 men held out.