Not the best of starts. I’ve only just settled into my cabin on sparkly new mega cruise ship MSC Bellissima — launched last week by Sophia Loren in a glamorous celebration in Southampton — and I’m already arguing with my cruise assistant, Zoe.

She means well and is keen to help, but she’s clearly not listening to what I’m saying and keeps repeating herself.

When she asks me, for the sixth time, if I’d like her to turn on the cabin TV, I screech: ‘Yes!’ in frustration and this seems to do the trick, as the smart screen magically switches on.

Showstopper: The MSC Bellissima, which was launched last week by Sophia Loren in a glamorous celebration in Southampton

You see, Zoe is no human helper, but the world’s first virtual personal cruise assistant. She is powered by artificial intelligence (AI) and primed to answer more than 800 questions in seven languages. Think of her as a sea-faring Alexa or Siri.

But I soon tire of her stock responses to my questions, as she repeatedly instructs me to contact staff members.

I start to hurl insults at the sleek, cylindrical box sitting on the table, only for her to tell me that she doesn’t understand.

When I ask, in blunt terms, why she’s being stupid, back comes her stock reply: ‘You may ask this question to a crew member or guest services.’ I despair. 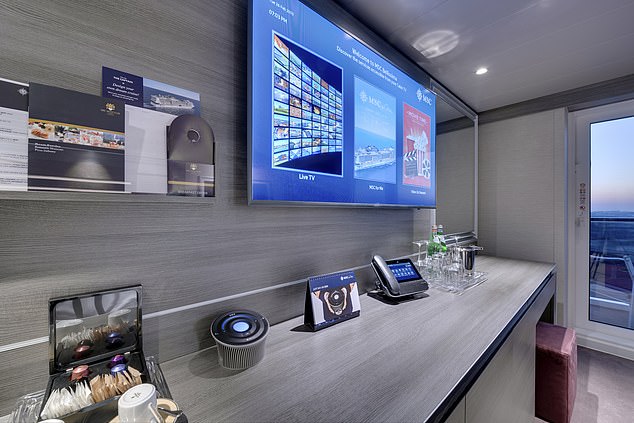 Each cabin has the world’s first virtual personal cruise assistant. It is powered by artificial intelligence (AI) and primed to answer more than 800 questions in seven languages

Even so, there’s an irresistible novelty factor about MSC Cruises’ newest crew member, who is designed to give useful details about life on-board and ashore, and can even bring up your cruise account on the TV.

I meet Zoe on MSC Bellissima’s glittering christening weekend — hosted by This Morning presenter Holly Willoughby — ahead of the £1 billion ship’s inaugural voyage to the Mediterranean, where it will be based for the summer before spending next winter in the Arabian Gulf.

But there are plenty of other diversions, as the ship is bursting with technological twists linked to nearly 100 interactive touchscreens dotted around, plus an app that can be downloaded to your digital device. 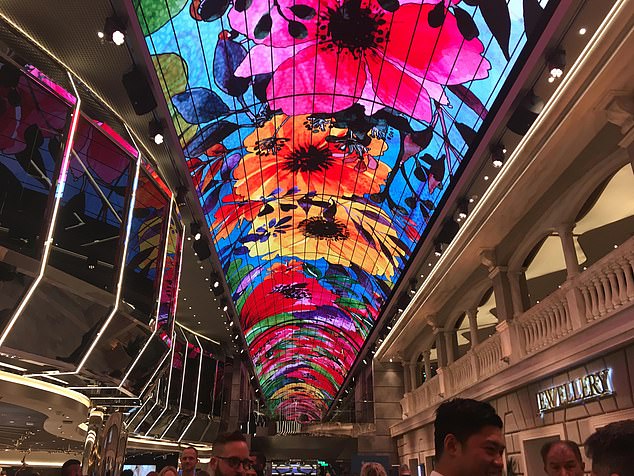 The ship is bursting with technological twists. At its heart is a long, Mediterranean-style promenade with an 80m LED dome that magically transforms from vistas of blooms to Art Deco designs 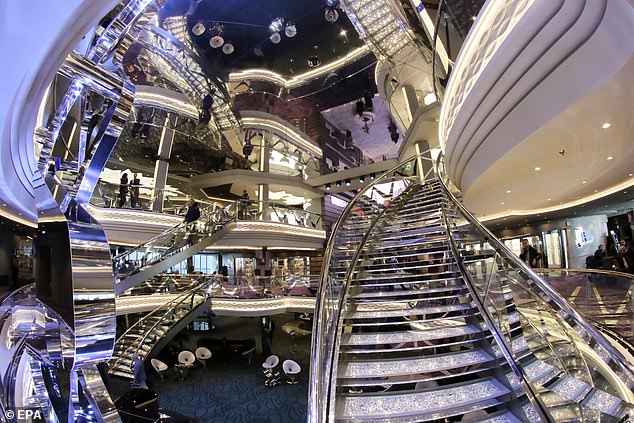 This contains a host of special features, including ones that help to expedite embarking and enable passengers to find family and friends on the ship.

The location feature is certainly handy, as MSC Bellissima is one impressive leviathan; the sixth largest cruise ship in the world, and the largest ship to be named in the UK, it takes nearly 5,700 passengers across 19 decks and has 20 bars, 12 dining venues, a water park with a trio of slides, and a massive Balinese spa.

At its heart is a long, Mediterranean-style promenade with an 80 m LED dome that magically transforms from vistas of blooms to Art Deco designs and cerulean skies. Here you’ll find the Masters Of The Sea pub, a perfect pint stop, but I’m more tempted by the 20 varieties of fizz in the Champagne Bar.

Sampling session over, I’m full of Dutch courage as I browse the classy jewellery shop in the arcade and spy a glittering Chopard watch with 28 diamonds, costing a cool £56,000. 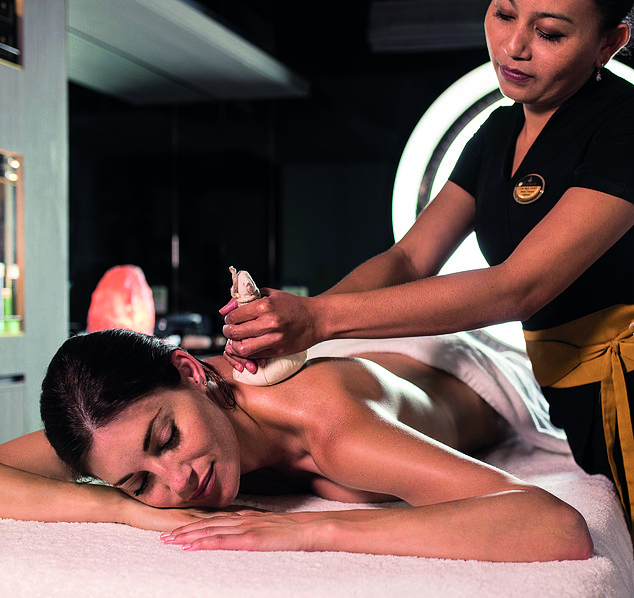 It’s the most expensive item on-board, so I try it on and dream, before reluctantly handing it back and indulging in the temptations of the chocolaterie, where I craft my own £8.50 bar of chocolate on an electronic tablet.

It’s easy to dine around the world here, from mouth-watering morsels in the Hola Tapas Bar and the creamy pates and cheeses of the French L’Atelier Bistrot, to the succulent steaks of the Butcher’s Cut steakhouse and entertaining tricks of the chefs in the Japanese Kaito Teppanyaki restaurant.

But, whatever your appetite, this ship is full of show-stopping style. Chrome, marble and glass complement dazzling staircases of Swarovski crystals, which glitter like crushed diamonds.

But another world awaits in the games arcade, where I spend hours of fun (though it’s not free) battling pirates and slaying a Minotaur.

It leaves me feeling fired up and ready to tackle anything — even Zoe.

A seven-night round-trip sailing from Genoa on MSC Bellissima includes stops at Naples, Malta and Barcelona and costs from £709 pp full-board, including flights (020 3856 3087, msccruises.co.uk).