The couple’s lavish family retreat in the sprawling countryside outside Manchester boasts six bedrooms, a football pitch and enough room to keep 15 horses.

They decided to make the move after a man tried to break into their £6million Cheshire pad in August 2016. 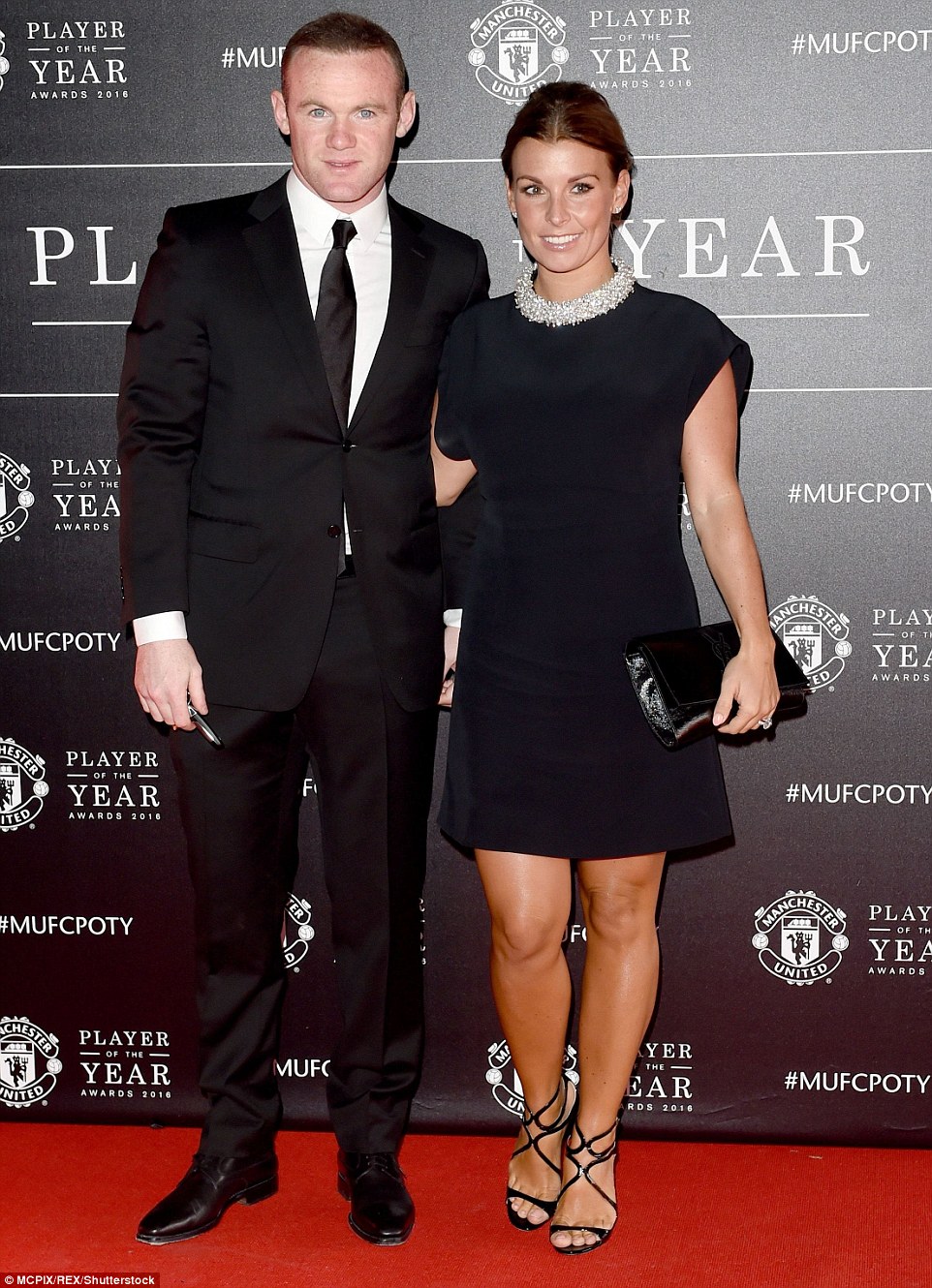 New family home: The couple have been building their dream home in the Cheshire countryside, and recently welcomed their fourth son Cass

Now revealing new aerial photographs of the 40-acre site show their new home is well on its way to completion with the roof almost ready to go on.

When completed, the extravagant property will have two floors as well as a subterranean basement.

Inside will be a steam room, plunge pool, hot tub, gym, cinema room with ten seats, wine cellar and snooker room with bar.

The enormous building, which is still surrounded by scaffolding and building works, was first pictured during snowfall in December 2017.

Coleen gave birth to the couple’s fourth son in February.

Breaking their tradition of giving their children K-letter names, they named him Cass Mac Rooney.

The pair already have three sons: Kit, Kai and Klay. 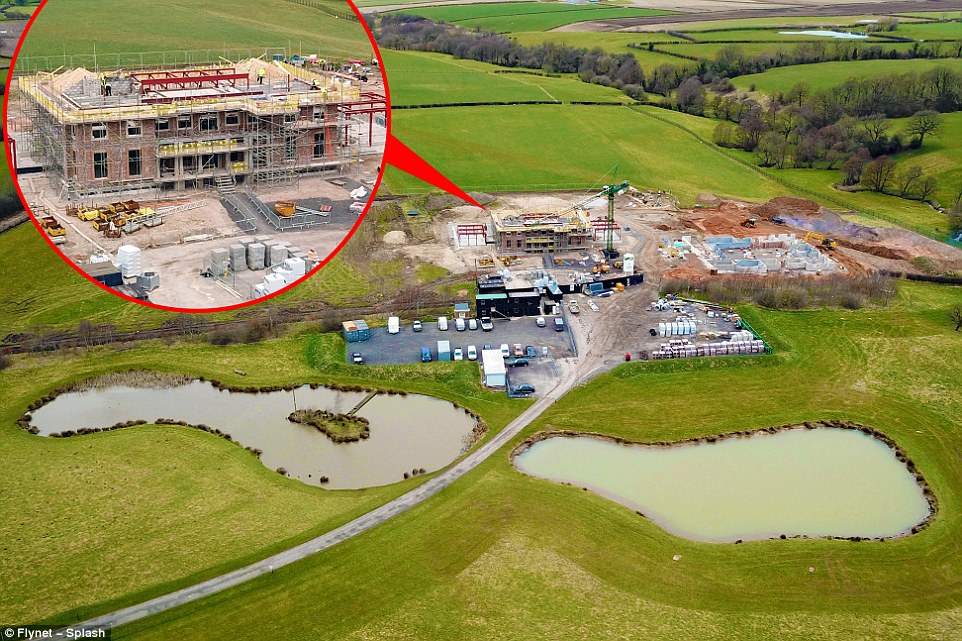 Stunning: The first floor of the ultra-private abode has been completed while second floor construction is almost complete 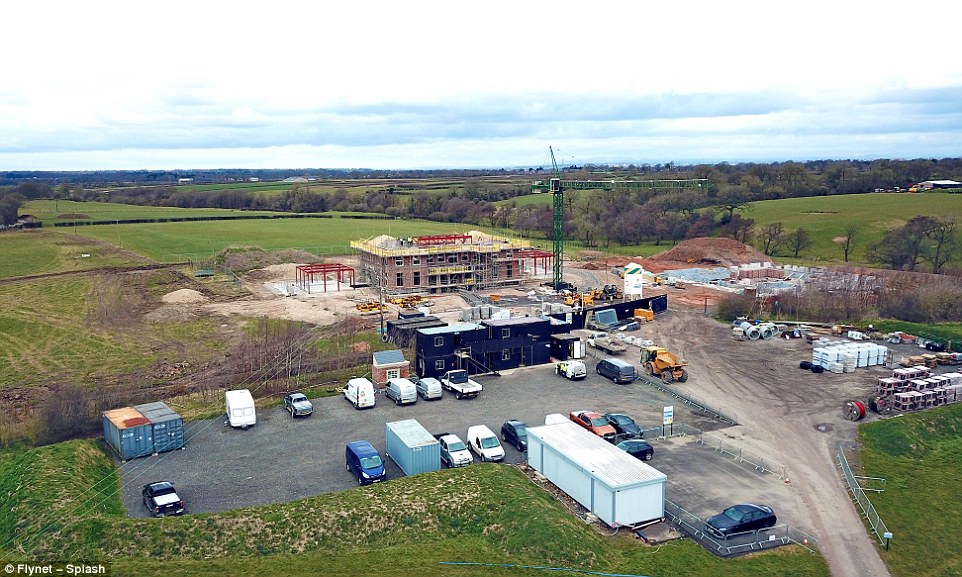 Picturesque: The building is surrounded by scaffolding and building works, with lorries and a caravan waiting on the site 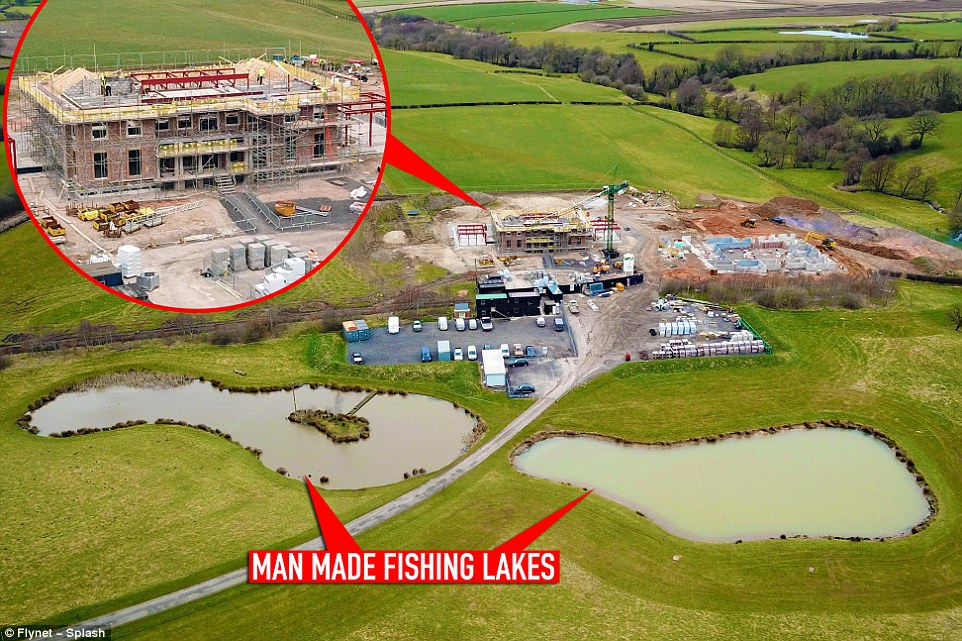 Lavish: Upstairs has six bedrooms, room for the couple and their four sons, all with en-suites, with the master bedroom also boasting a dressing room, overlooking two mammoth fishing lakes

Among its luxurious features are a six-car garage, an orangery and a spa.

His and hers changing rooms are being fitted, and after a dip in the pool guests can pop outside to the extensive patio and landscaped gardens.

All bedrooms are ensuite and the master bedroom even boasts a dressing room. 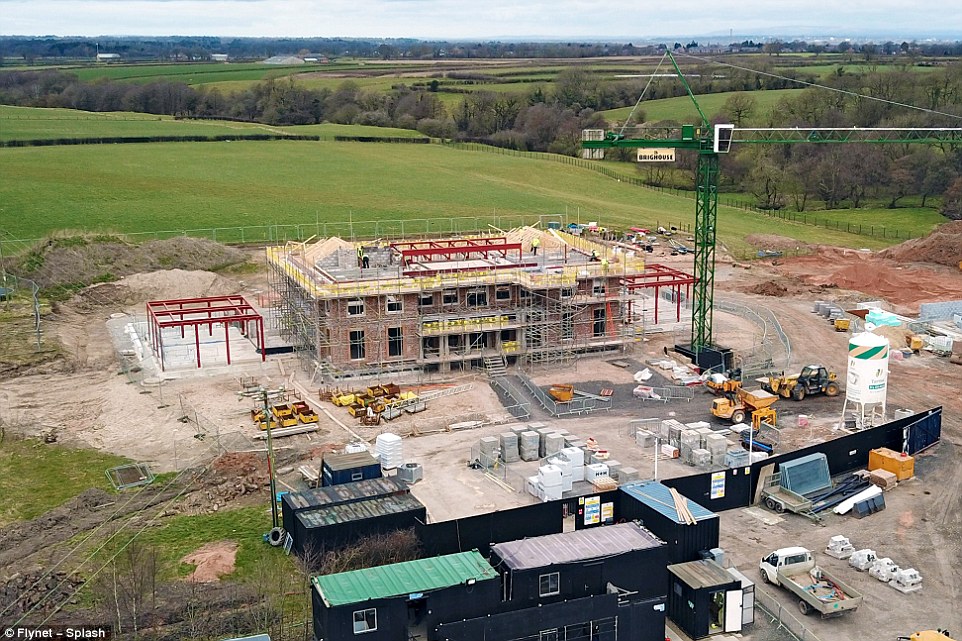 Luxury: The subterranean basement area of the main house could also be seen, with the foundations for the 12m indoor swimming pool and hot tub and gym area laid 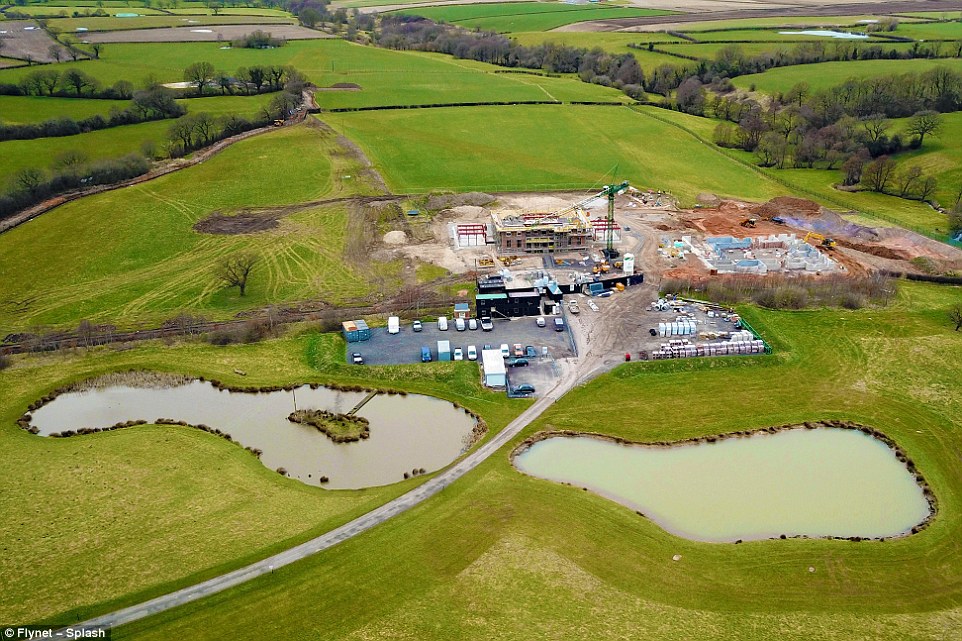 Beautiful: The beautiful property is set in 40 acres of rolling Cheshire countryside

Questions were previously raised about the size of the property and environmental surveys were carried out.

But the local council gave the project the go-ahead after officers decided the home would be a visually pleasing development. 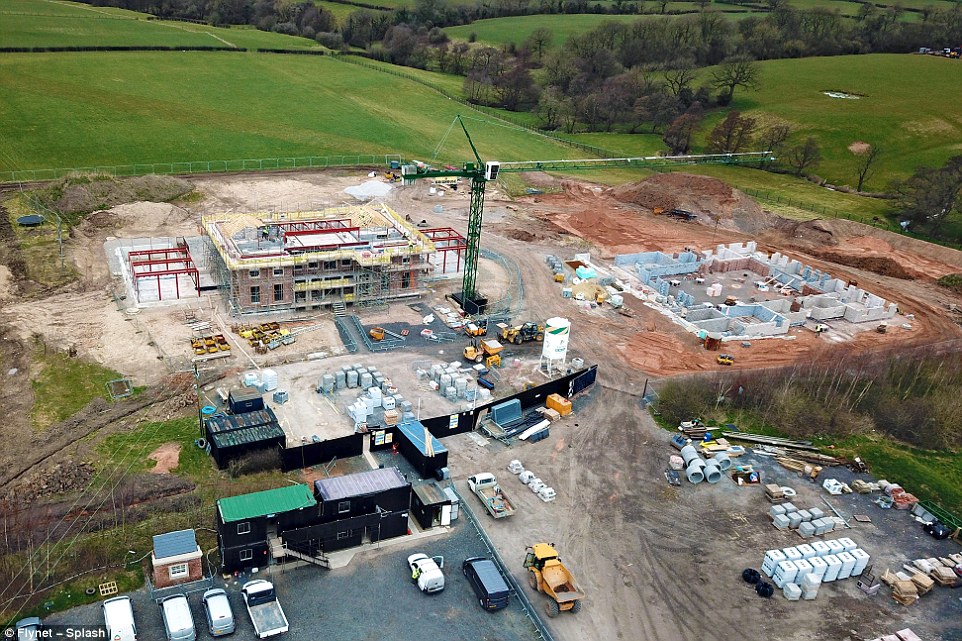 Work, work, work: The foundations for the stable house complex along with the planned horse menagerie have been laid, which will have room for 14 horses plus a hay store and a tack room (R) 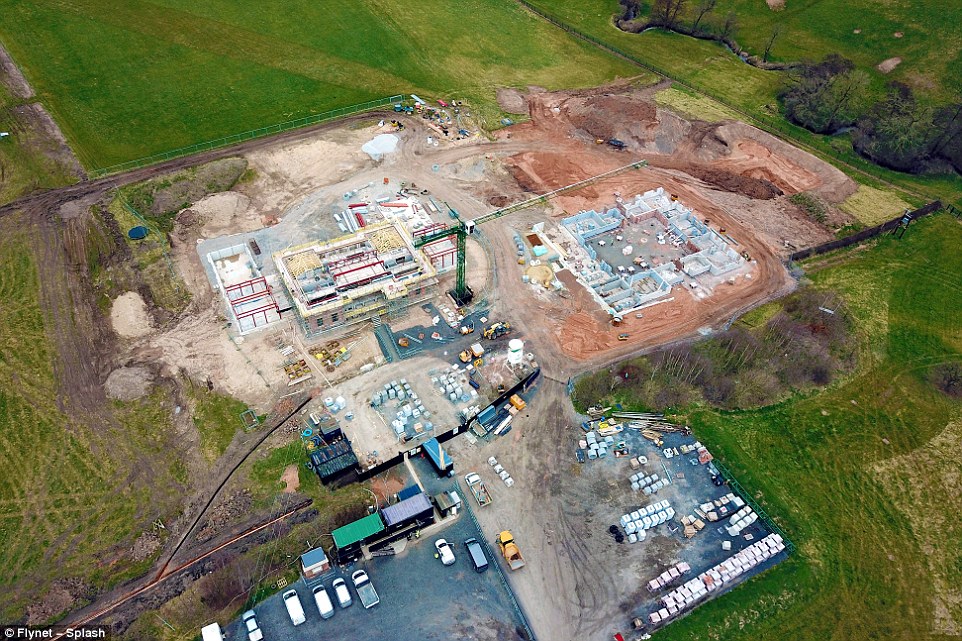 Plans for the new home were already in place before Wayne’s drink-drive conviction threatened to rock their nine-year marriage.

He was caught behind the wheel of officer worker Laura Simpson’s Volkswagen in September 2017.

She later said that she planned to have sex with the England star if they had not been stopped by police. 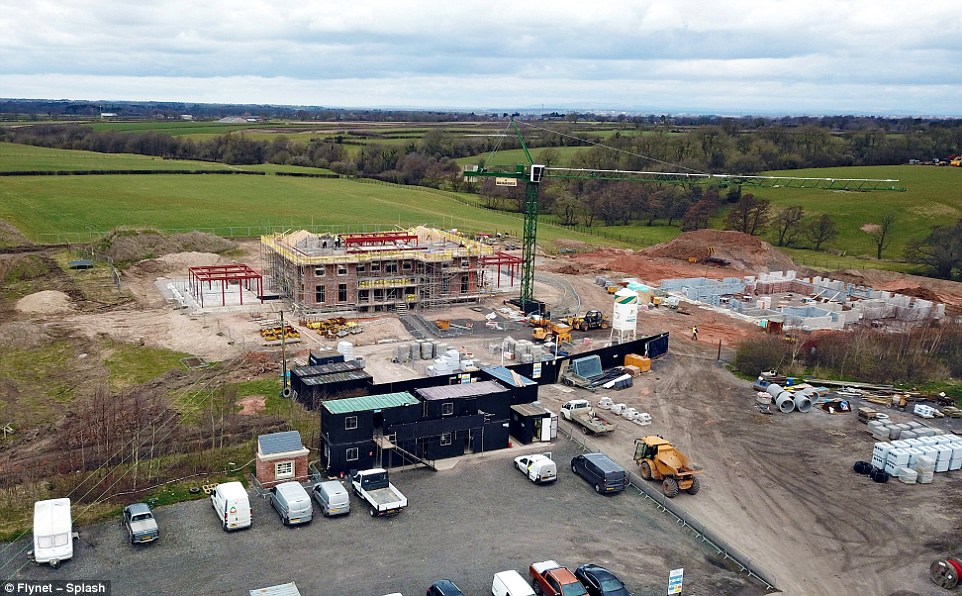 Lavish: The pool will be surrounded by a glass pavilion and, plunge pool and steam room. Guests will be able to opt for ‘his’ or ‘hers’ changing rooms, and after a dip they can pop outside to the extensive patio and landscaped gardens, or the two man-made fishing lakes 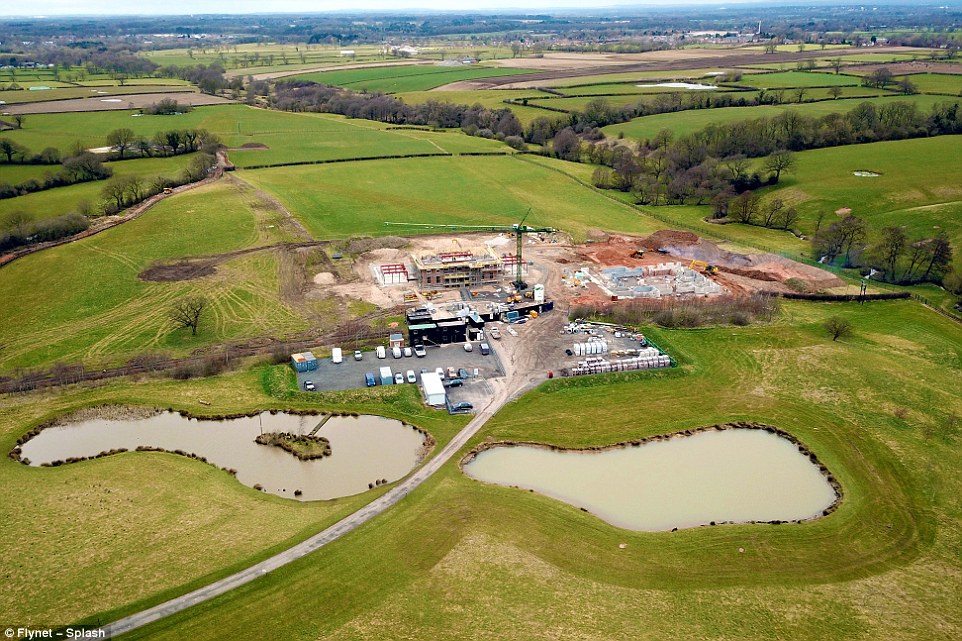 Perfect for guests: Also visible was the mammoth garage block which when completed will have room for six cars 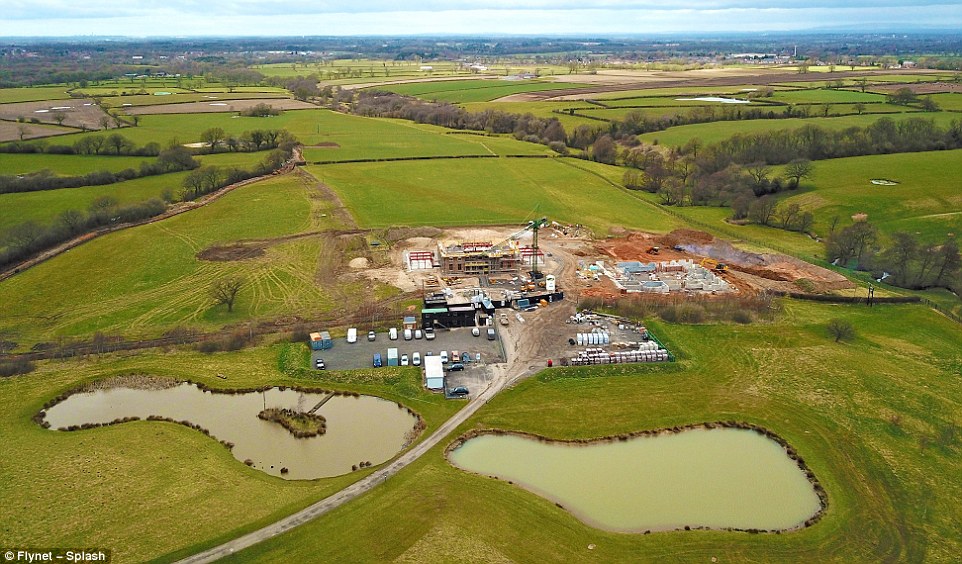 Under construction: The vast landscape was first pictured during snowfall in December 2017, but showed the construction on the ground floor is well under-way 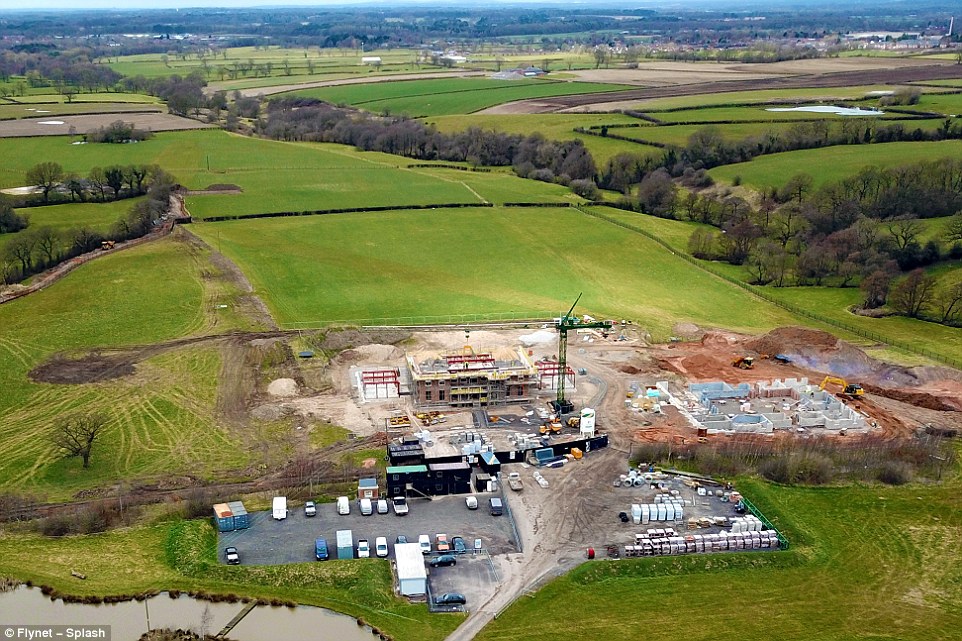 Greenery: MailOnline previously reported that a football pitch is also being constructed on the sprawling pile

Wayne and Coleen currently live nearby in Cheshire, but the family was shaken after an attempted burglary at the property in 2016.

Everton striker Wayne was playing in his testimonial match at Old Trafford at the time and Coleen was spectating with their children.

Robert McNamara was jailed for two years and eight months at Chester Crown Court after the incident.

He reportedly staked out the pad three times, making 260-mile round trips, because of his fascination with the former Manchester United and England footballer. 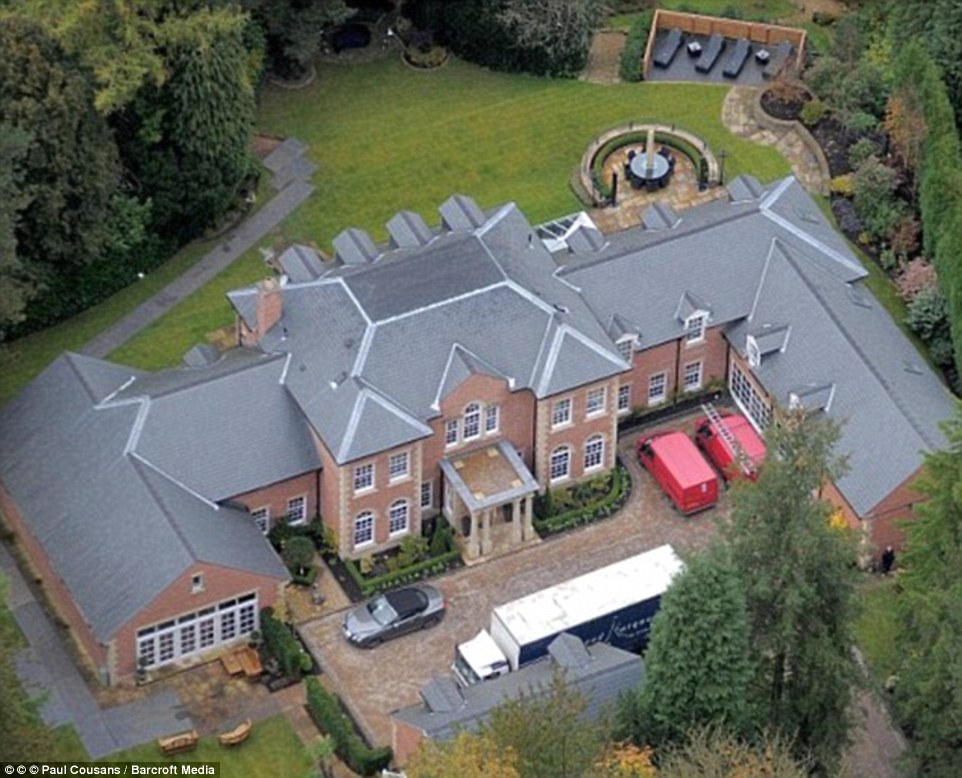 Wayne and Coleen currently live nearby in Cheshire, but the family was shaken after an attempted burglary at the property (pictured) in 2016 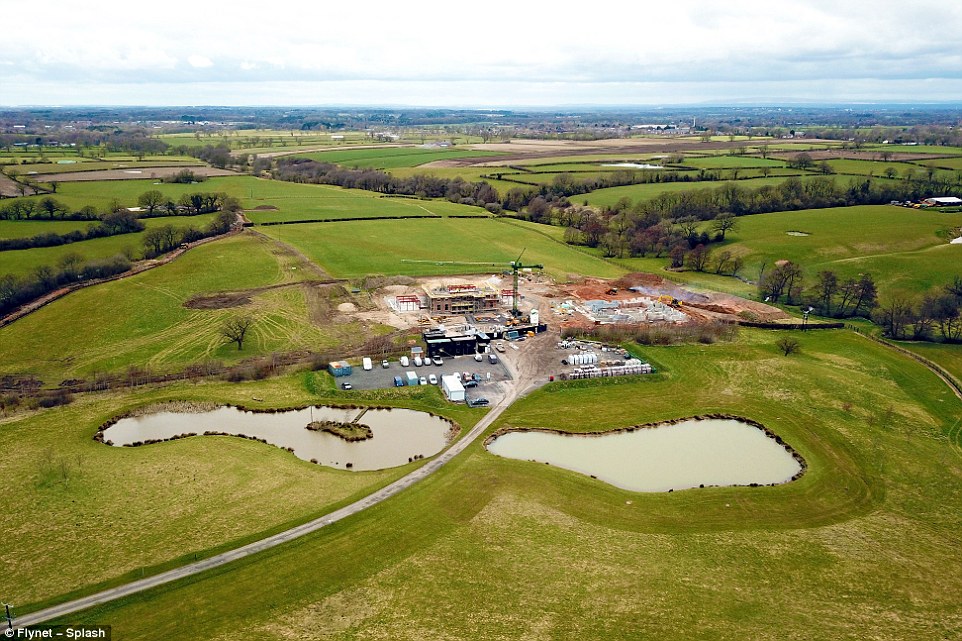 Sprawling: The Rooneys are in the midst of their own version of Grand Designs with their custom-built mansion 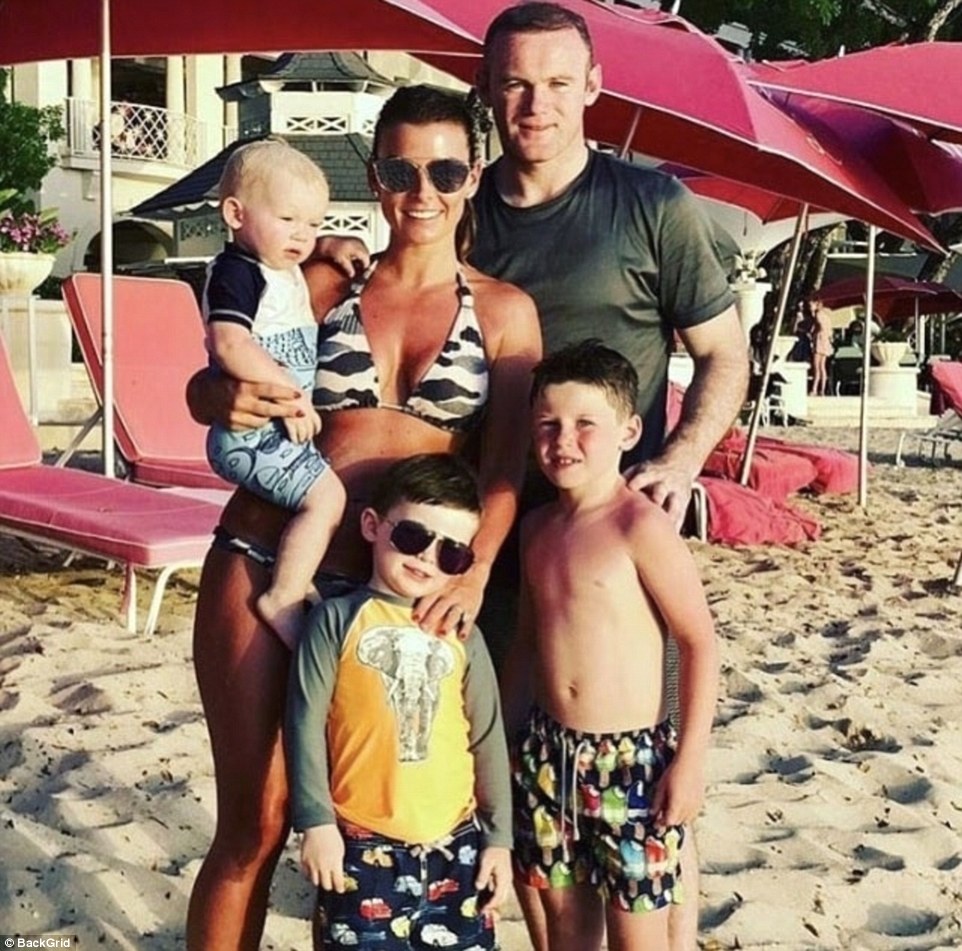 Mrs Rooney said: ‘After it happened it caused sleepless nights, worrying and watching security cameras fearing someone was there.

‘I feared for my children playing outside in the garden and still do.’

She said it caused anxiety when her husband was away and she no longer felt comfortable in the home unless a friend or family member was with her.

She said the couple had spent extra money on security since the incident.

Mrs Rooney said she and the family, including the couple’s sons Kai, Klay and Kit, had been at the tribute game at Old Trafford for what was meant to be a ‘night of celebration’, but she had returned home to find the house full of police.

She said: ‘I’m just happy the children were asleep and didn’t have to see what was going on.’