Wayne Rooney showed solidarity with the Black Lives Matter movement by taking a knee today ahead of Derby County’s clash with Millwall.

Former England and Manchester United forward Rooney, 34, took to the centre circle sporting Derby’s blue away kit, crossing his arms and kneeling on the turf to show his support before his side’s 3-2 win this afternoon.

Football has thrown its support behind the Black Lives Matter movement, backing the cause after the recent death of George Floyd in Minneapolis added powerful momentum to the worldwide campaign.

And the Rams’ skipper Rooney is the latest footballer to have taken the knee this week to lend his support to the cause amid a stadium of 650 cardboard cut-out spectators.

All 22 players knelt before kick off, as has become customary in the past week.

The kneeling gesture has been a fixture of the Premier League’s project restart, which kicked off Wednesday, as the industry backs anti-racism protests.

The phrase ‘Black Lives Matter’ is also replacing player names on the back of shirts for the first 12 matches of the restart.

United star Rashford was picked up by the cameras in the centre circle of the Tottenham Hotspur stadium in north London, taking the knee and raising a clenched fist above his head as fellow team-mates joined him.

On the opposing side England captain Harry Kane followed suit, replicating the gesture as all players and staff shared a moment kneeling on the turf before beginning the match.

Rashford, 22, also became the nation’s hero this week as he forced the Prime Minister into an extraordinary U-turn providing £110million free school meals to vulnerable children over the summer holidays. 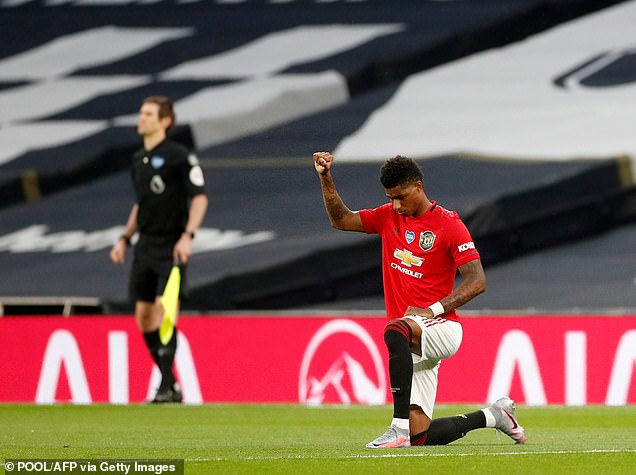 Marcus Rashford was among the football stars to lead the show of solidarity for the Black Lives Matter movement on Friday night, taking to the centre of the field with a clenched fist 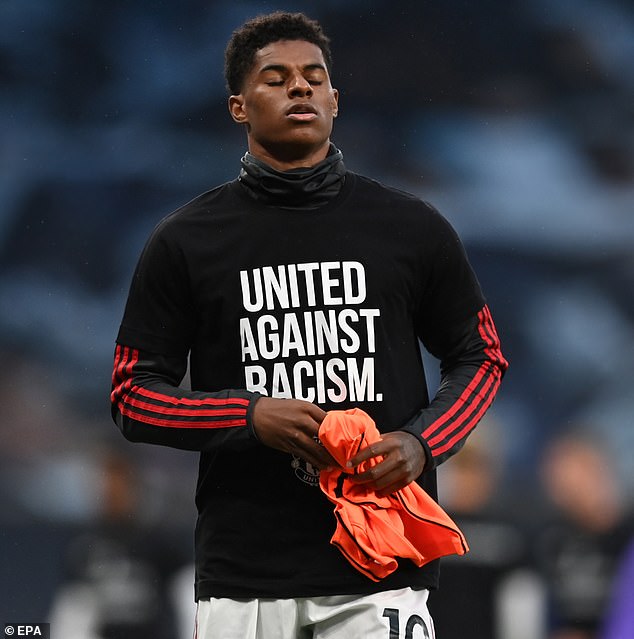 Prior to the match Rashford and his team mates had warmed up wearing t-shirts which read: ‘United against racism’ 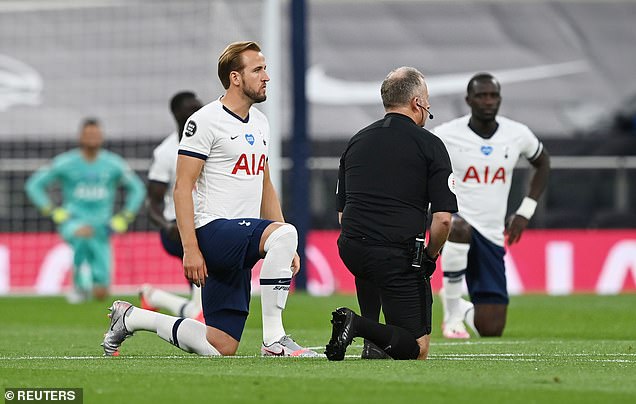 England captain Harry Kane also mirrored the gesture, as players and staff came together to share the moment of support

On Wednesday evening England striker Raheem Sterling was one player to also show the action at the Etihad, before his Manchester City side went on to defeat Arsenal.

The Premier League looks set to continue the kneeling gestures before all matches, as the full run of top flight fixtures return following the league’s Project Re-start, after being halted by the coronavirus pandemic.

Black Lives Matter protests continue to be prevalent across the UK, with all major cities holding protests over the past several weekends.

The Rams went on to thrash Millwall this afternoon with a stand-out hat-trick from 18-year-old midfielder Louie Sibley. 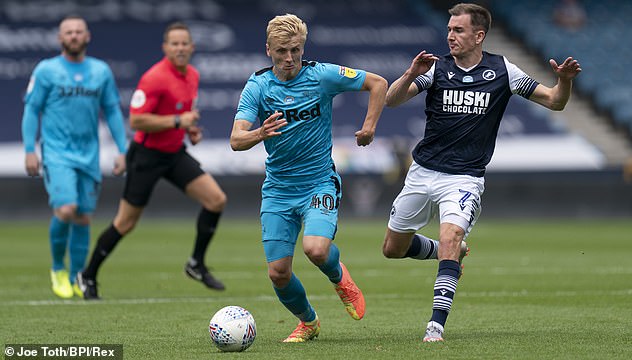 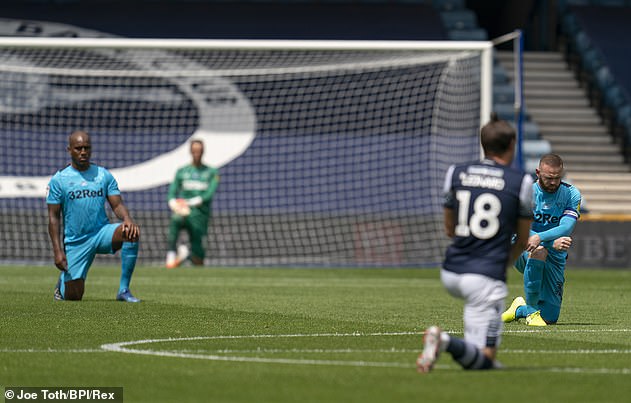 The kneeling gesture was first made popular by American football star Colin Kaepernick.

He took the knee during the US national anthem in a powerful protest against police brutality in 2016.

At the time he said: ‘To me, this is bigger than football, and it would be selfish on my part to look the other way. There are bodies in the street and people getting paid leave and getting away with murder.’

But despite the adoption of the gesture in UK football, this week Foreign Secretary Dominic Raab caused uproar after claiming it originated from the TV series Game of Thrones.

‘[I] take the knee for two people – the Queen, and the missus when I asked her to marry me,’ he said during an interview with TalkRadio.

I’ve got to say on this taking a knee thing, I don’t know, maybe it’s got a broader history but seems to be taken from the Game of Thrones, feels to me like a symbol of subjugation and subordination rather than one of liberation and emancipation.’

Despite Raab’s comments, Premier League players have been urged to continue the gesture of solidarity. 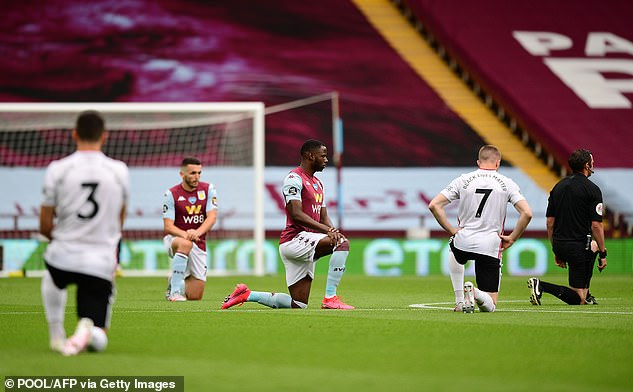 Kick It Out chairman Sanjay Bhandari said: ‘It was fantastic, particularly the way it was done in the Aston Villa-Sheffield United game.

‘It was so choreographed and so powerful. It was an incredibly moving moment. It is a gesture of solidarity that we have had enough and it is time for change and time for action.

‘The players have a platform and it is great that the authorities have actually enabled them to use this platform in this particular way without the fear of sanction.

‘I welcome that and that’s not just the Premier League that’s also the FA, UEFA and FIFA. It is really important we have these gestures of solidarity.