When Brock Purdy stepped in as quarterback for the San Francisco 49ers, his early success was initially seen as a surprise.

Now that the last pick in this year’s draft has kept up that level of play for three straight starts, it’s becoming expected.

Purdy joined some illustrious company with his third straight winning start with two touchdown passes, leading the 49ers to their eighth straight win in a 37-20 victory over Washington on Saturday.

Purdy’s play has ensured that the surging Niners (11-4) have shown no signs of slowing down after turning the offense over to their third-string quarterback. 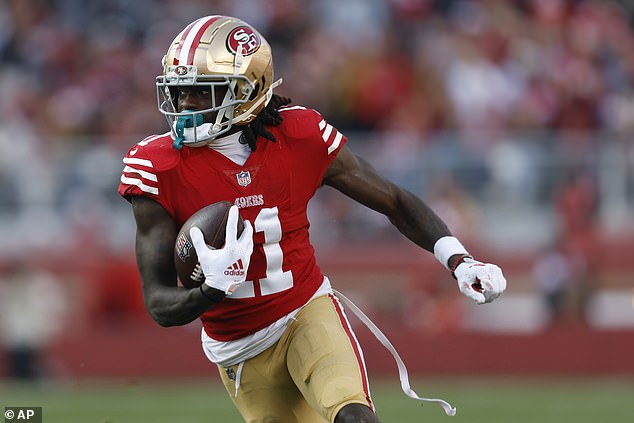 San Francisco is assured of at least the No. 3 seed in the NFC playoffs and still have a chance to move up if Minnesota and Philadelphia falter down the stretch.

‘At this point, we know who exactly who he is,’ receiver Brandon Aiyuk said about Purdy. ‘Nobody´s surprised anymore.

Purdy’s rapid ascent from an unknown Mr. Irrelevant to a key component to one of the NFC’s top contenders has been impressive.

He threw two TD passes in a relief effort of a Week 13 win against Miami and then has won his first three starts, throwing two touchdown passes in each game.

He joined Hall of Famer Kurt Warner as the only QBs since 1950 to win their first three starts, while at least two TD passes each game.

‘I still have that same fire and drive as before I wasn´t playing,’ Purdy said. ‘I want to go in and I want to prove to my teammates and earn the respect every play, every snap, every drive, that kind of mentality. 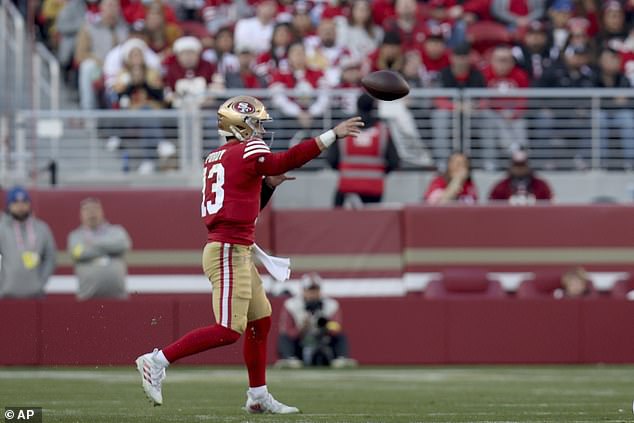 ‘So, I just got to remind myself to not lose that passion and that fire and that it´s never easy.’

Purdy has made it look easy, taking advantage of an offense that features several star playmakers and an elite play-caller in coach Kyle Shanahan.

While Purdy’s biggest responsibility is to get the ball into the hands of players such as Christian McCaffrey and George Kittle, he has also shown an ability to stretch the field.

He threw his third TD pass that traveled at least 25 yards downfield on Saturday to Kittle, one shy of the total amount of those TDs the Niners had as a team since 2020.