‘We can change!’ EU leaders vow to make sure it is ‘better loved’ to stop more countries leaving

EU leaders vowed to make sweeping changes to make sure the project is ‘better loved’ today as they plotted to prevent more countries following the UK out the door.

As Britain prepared for Brexit at 11pm senior bureaucrats promised reformed to slash red tape and speak more clearly to citizens to keep the bloc together.

But after their bitter parting shot, ex-Belgian PM Mr Michel admitted they will work to make sure that a united Europe is more popular to member states, with some criticism in countries like Greece and Italy.

‘We want them to be keener about the European project and so our concern is to stop using jargon and to cut down the red tape,’ he told a Brussels press conference.

In a joint newspaper article they had spoke of their ‘fondness for the United Kingdom’ and praised Britons for their ‘creativity, ingenuity, culture, and traditions’.

But they could not resist putting the boot in as the UK prepares to leave the EU at 11pm tonight.

The trio suggested that on its own Britain will not be able to influence global affairs in the way that it has been able to as a member of the bloc.

They then used the press conference to double down on the jibe as Ms von der Leyen said ‘strength does not lie in splendid isolation’.

Their hostility was in contract to an olive branch held out by Donald Tusk to his departing UK  ‘friends’.

Ahead of the historic moment at 11pm, the former European Commission president used an online message to say: ‘We will always be a community. And no Brexit will ever change that.’

The comments came as Britain’s MEPs left the European Parliament for the final time.

The Brexit Party’s contingent marked the occasion this morning with a show of strength as they marched out of the building carrying a ‘Brexodus Express’ banner as Ann Widdecombe said: ‘The MEPs leaving here today, our duty is done, our harvest is home and now we’re off.’

Britain’s MEPs will leave the European Parliament for the final time today. Brexit Party MEPs took part in a march out of the building this morning carrying a banner reading ‘Brexodus Express’ 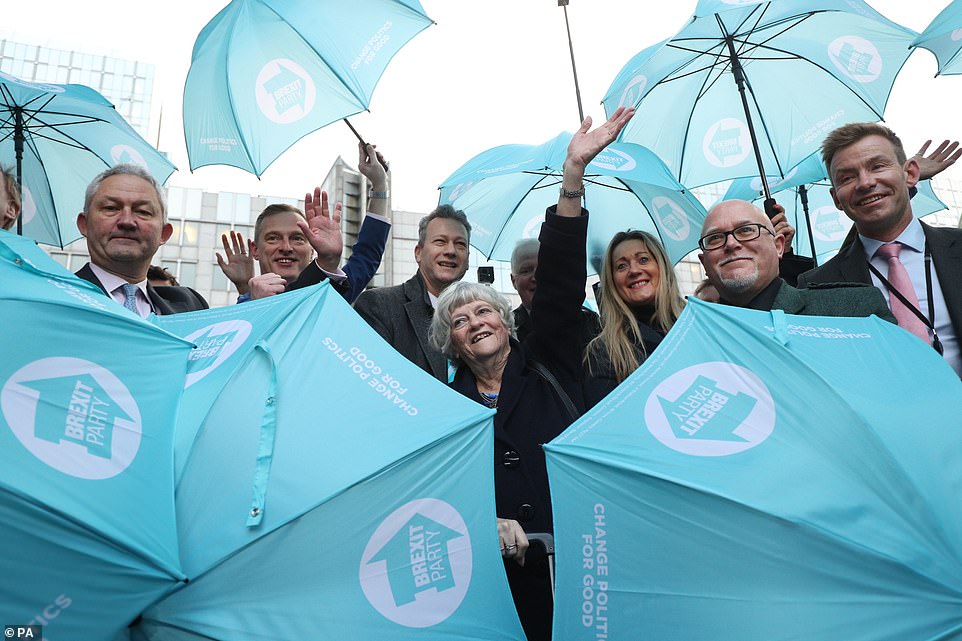 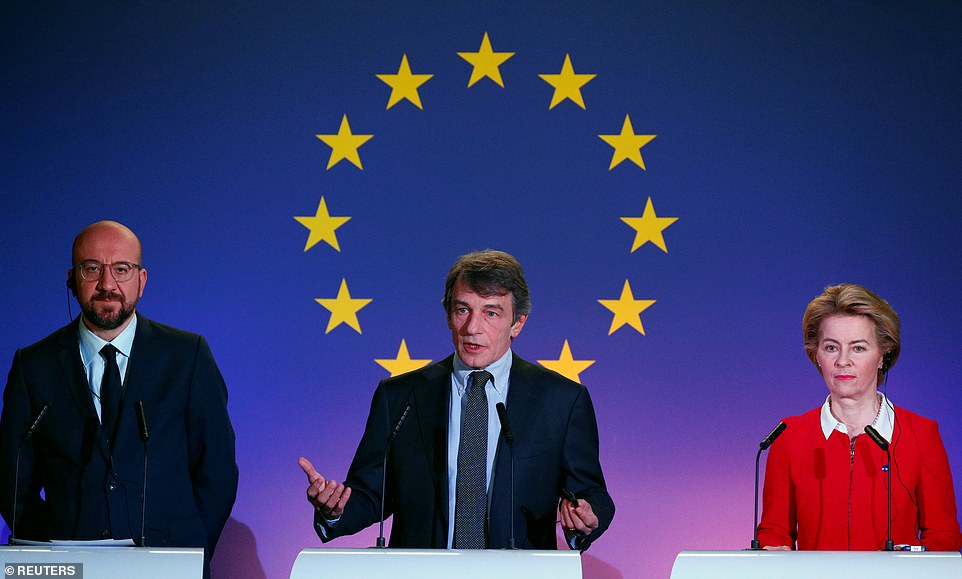 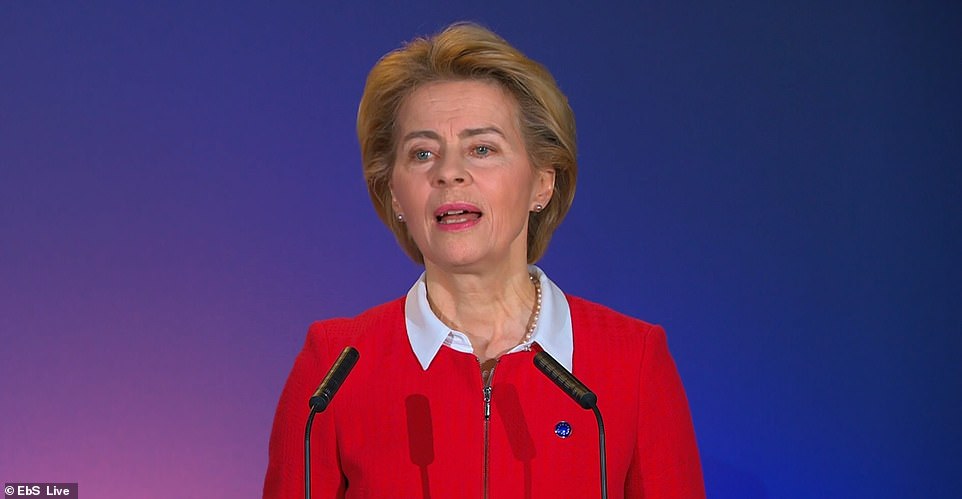 Nigel Farage today claimed that 11pm tonight is ‘the point of no return’ for Britain’s relationship with the EU, insisting there is no way the UK will ever rejoin.

The Brexit Party leader claimed Brexit was ‘an incredible victory for ordinary people against the establishment’ as he spoke of his joy at seeing it happen.

Appearing on Good Morning Britain he also praised Boris Johnson, despite running candidatures against the Tories at the general election, arguing in December the Prime Minister would not get a proper Brexit.

He spoke as preparations continued in London and across the nation for Britain to leave the EU later tonight.

‘There’s lots of work to come, but think of this, what happens tonight at 11 o’clock, we pass the point of no return,’ Mr Farage said this morning. ‘Once we’re out, there’s no way this country will ever rejoin and I think this is the big moment in history.

‘As for the next phase, all I can say is right now, Boris Johnson is saying all the right things and if he delivers those things, we will be truly, genuinely independent.’

Britain’s split from Brussels has prompted a great deal of soul searching in the EU about its status and its position on the world stage.

Critics of the EU like Nigel Farage have predicted that Brexit will signal the beginning of the end of the political union.

But writing in The Times, Ms von der Leyen, Mr Michel and Mr Sassoli said Brexit will ‘mark a new dawn for Europe’ as well as the UK.

They claimed that the years since the result of the 2016 EU referendum had ‘brought us closer together as nations, as institutions and as people’.

‘They have reminded us all that the EU is more than a market or economic power but stands for values that we all share and defend,’ the trio wrote.

‘This is why the member states of the EU will continue to join forces and build a common future.

‘In an age of great power competition and turbulent geopolitics, size matters.

‘No country alone can hold back the tide of climate change, find the solutions to the digital future or have a strong voice in the ever-louder cacophony of the world. But together, the EU can.’

David Cameron insists UK can make a success of Brexit

David Cameron today insisted he believes the UK will be able to make a success of Brexit as he hailed the ‘very big day’ for Britain.

The UK will split from Brussels at 11pm this evening after more than three years of tortuous wrangling over the terms of Britain’s divorce.

It will likely represent a moment of sadness for Mr Cameron given that he unsuccessfully led the campaign to keep the UK in the bloc at the 2016 EU referendum which he decided to call.

He quit as PM after his Remain side was defeated by Leave, and this morning he said he ‘knew this day would come’ eventually despite repeated Brexit delays.

Mr Cameron told Sky News: ‘It is obviously a very big day for our country. Obviously I led the campaign to stay in but I always accepted the referendum result and knew this day would come.

‘We can make a success of the choice that we make and I am sure that is exactly what we will do and I wish the government well in all their endeavors to make sure that happens.’

The comments are likely to spark anger among Brexiteers and reinforce their belief that leaving the EU is the correct course for the UK.

The remarks also risk souring trade talks between Britain and Brussels before formal negotiations on the future partnership agreement have even begun.

The EU trio addressed the media in Brussels this morning as Mr Michel said the EU would become stronger after Brexit.

He said: ‘It is never a happy moment when someone leaves but we are opening a new chapter and we will devote all our energy to building a stronger and more ambitious European Union.’

He also delivered a trade talks warning as he said: ‘The more the UK will diverge from EU standards, the less access to the single market they will have.’

Meanwhile, Ms von der Leyen said she was not ‘optimistic’ or ‘pessimistic’ about Brexit but ‘determined’ to make the best of it.

She reiterated the trio’s ‘size matters’ jibe as she said ‘strength does not lie in splendid isolation’.

‘During all these years, 47 plus years, our union has gained political impetus and has become a global economic powerhouse,’ Ms von der Leyen said.

‘Our experience has taught us that strength does not lie in splendid isolation but in our unique union.

‘Nowhere else in the world can you find 27 nations of 440 million people speaking 24 different languages, relying on each other, working together, living together.

‘And this is not by accident or by chance. This is grounded in centuries of shared history, decades of shared experience and a determination and confidence to shape our common future together.’

She insisted the EU wanted to have the ‘best possible’ relationship with the UK after it leaves ‘but it will never be as good as membership’ of the bloc.

When the UK leaves the EU this evening the two sides will enter into a standstill transition period during which they will hammer out the terms of a trade deal. 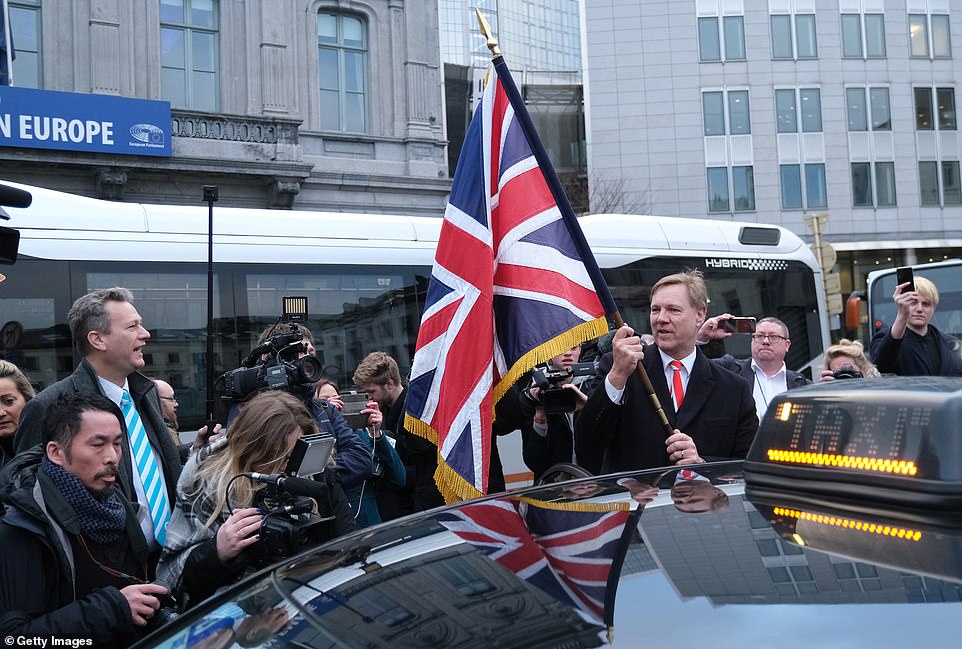 Brexit Party members of the European Parliament, including Jonathan Bullock (4th R) holding a British flag, depart from the Parliament to return to Great Britain 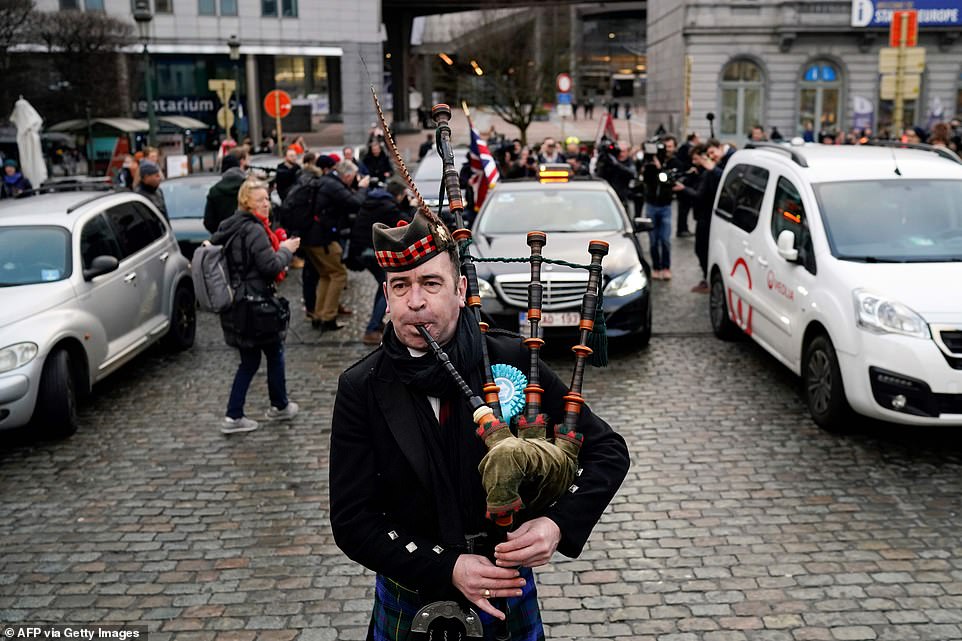 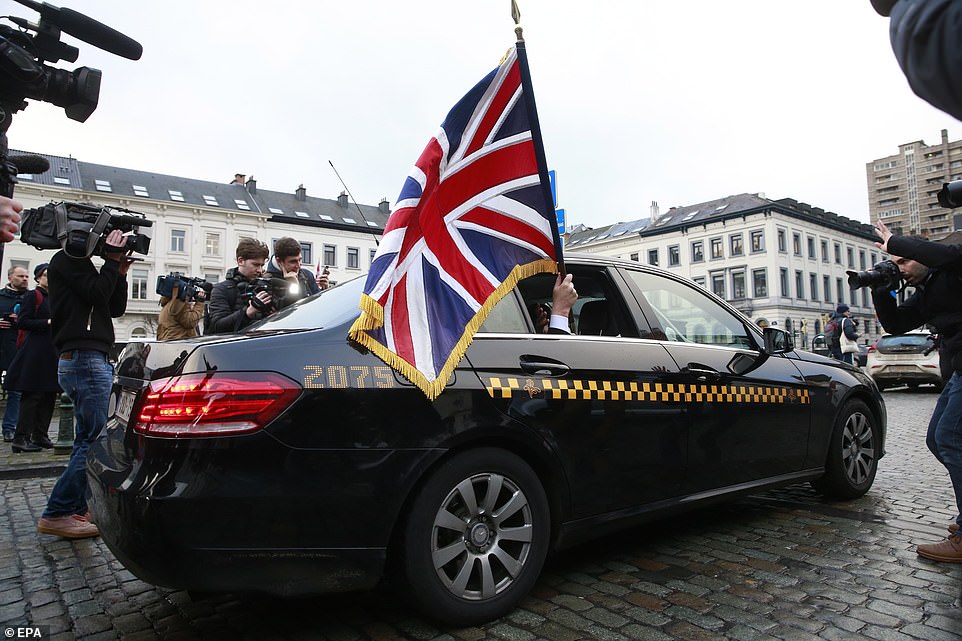 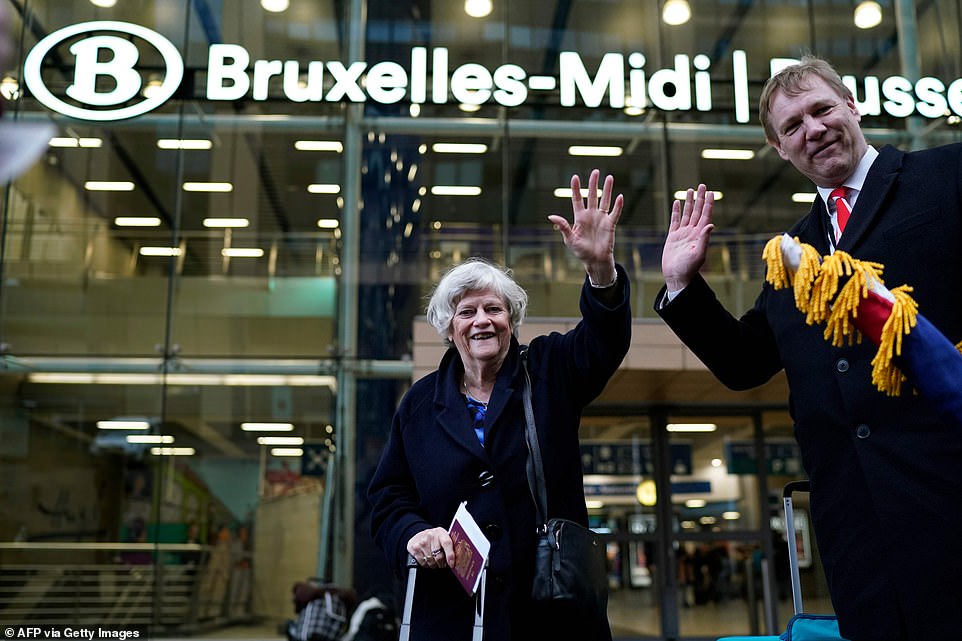 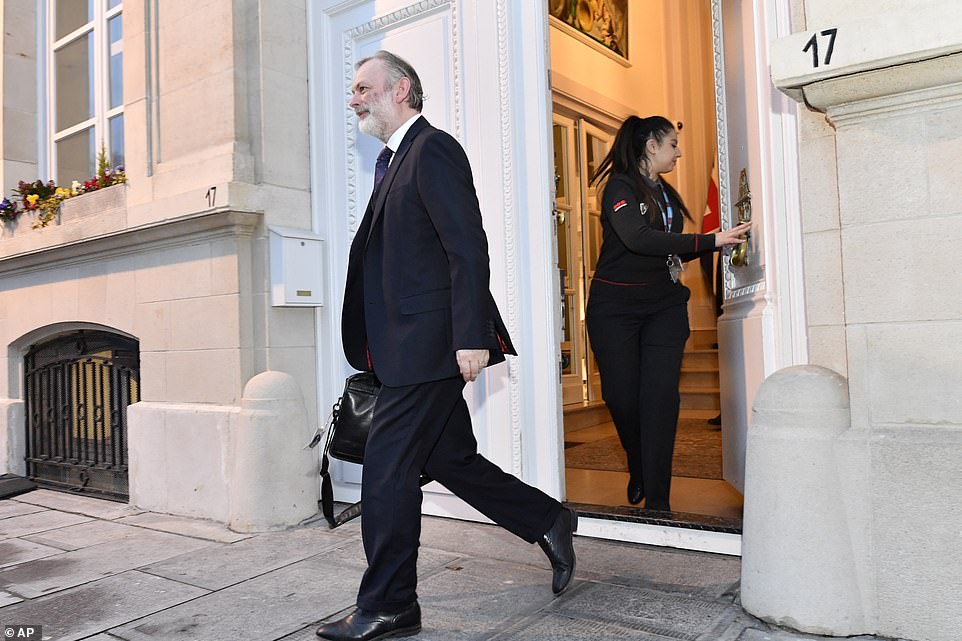 Tim Barrow, the UK’s permanent representative to the EU, was pictured leaving his office in Brussels this morning. At 11pm he will become the UK’s ambassador to the EU 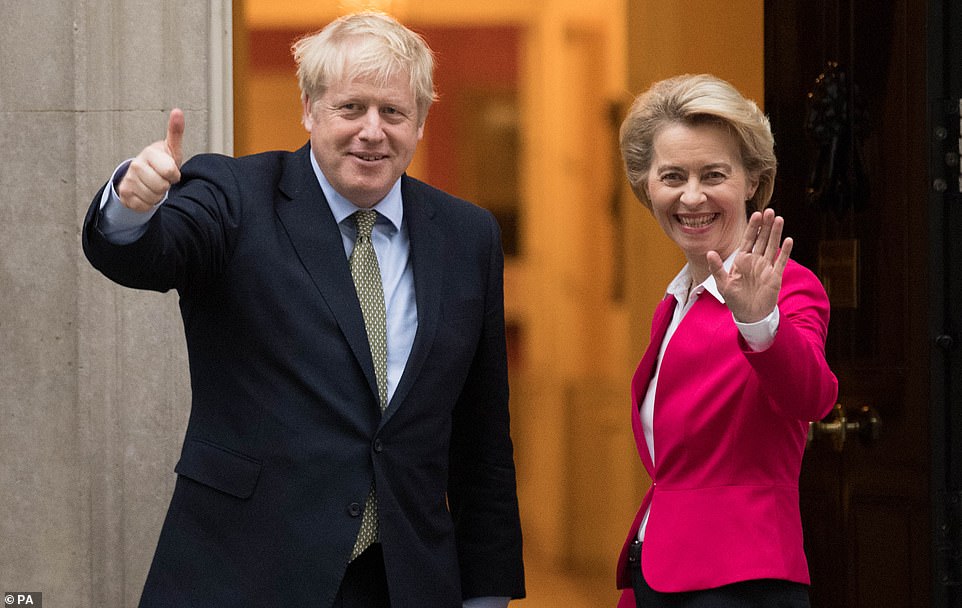 The comments risk souring trade talks between the EU and UK before they even begin. Ms von der Leyen is pictured alongside Boris Johnson in Downing Street on January 8

The transition period will end in December 2020. Boris Johnson is adamant he will not agree to extend the transition but the EU does not believe there is enough time to strike a comprehensive deal by the end of the year.

The trio’s remarks came as Britain’s MEPs walked out of the European Parliament for the final time.

Ms Widdecombe said: ‘I have a mixture of feeling very, very jubilant and full of celebration but also profound relief because there was a time when I wondered if this day was ever going to come.

‘Indeed it was at that point that I joined the Brexit Party to try and help to make it come.’

Ms Widdecombe led the Brexit Party’s march out of the party after leader Mr Farage left Brussels for the last time as an MEP on Wednesday evening following the final vote on the Withdrawal Agreement.

She said she would be joining the rest of the party in Parliament Square for the stroke of 11pm on Friday evening.

She added: ‘And that’s it. That is the moment when Brexit has been Brexited.’