‘We just ran like hell’: Witnesses tell of panic as terror returned to a London Bridge

City workers and tourists have told of their panic as terror returned to a crowded London Bridge for the second time in two years today.

Armed police shot a man on London Bridge today in an incident that has left one person dead and up to five people injured as the Met says it is treating it as ‘terror-related’.

Many have described how they were told to leave the area by police, heard shots and saw people running for their lives as panicked Londoners fled Borough Market in a ‘stampede’ after gunshots were heard.

Nurse Jackie Benfield, 32, described how she asked to be let off a bus on London Bridge after she heard ‘five or six’ gunshots. 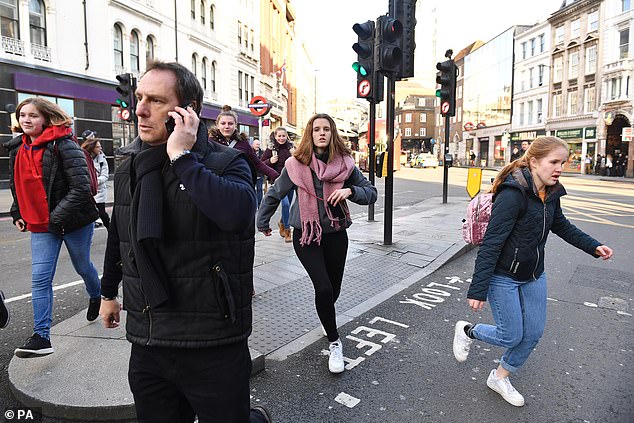 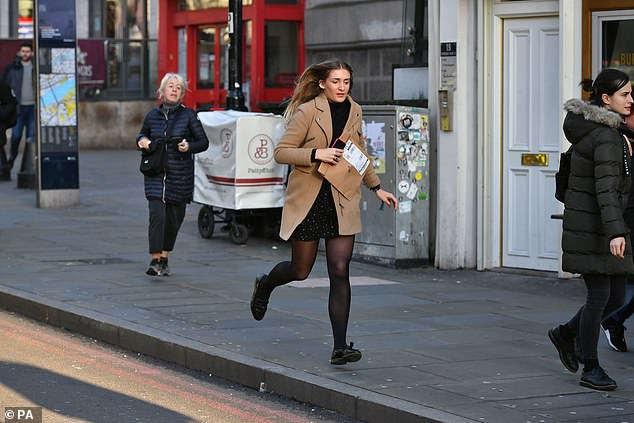 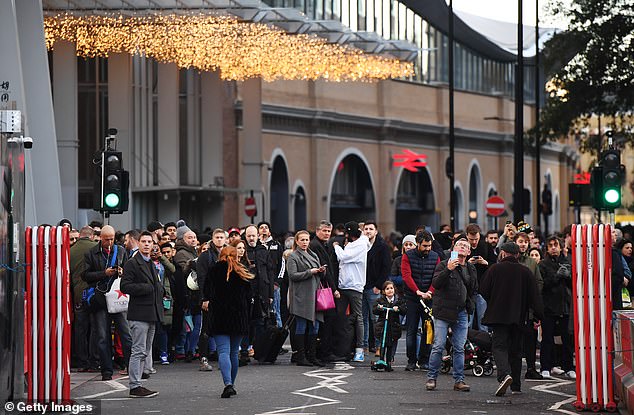 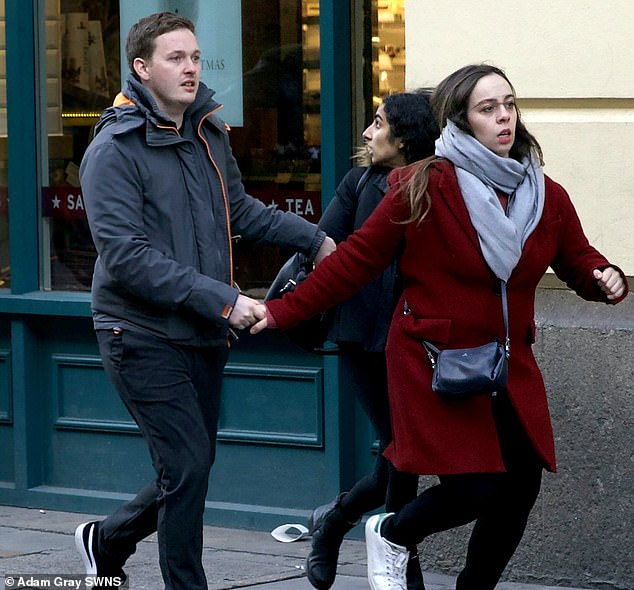 Ms Benfield, who was on her way home from work, said she exited the bus and ‘ran like hell’ to escape the shots.

Connor Allen, who was in his van on the bridge when it was evacuated said: ‘Everyone just started running, you heard these pops and that was it. We just got out the van and started running.’ 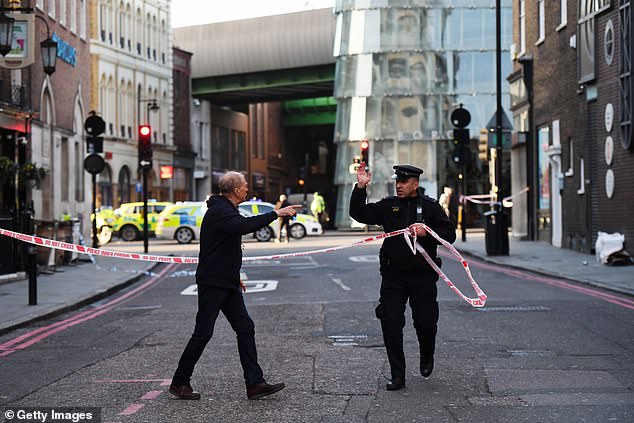 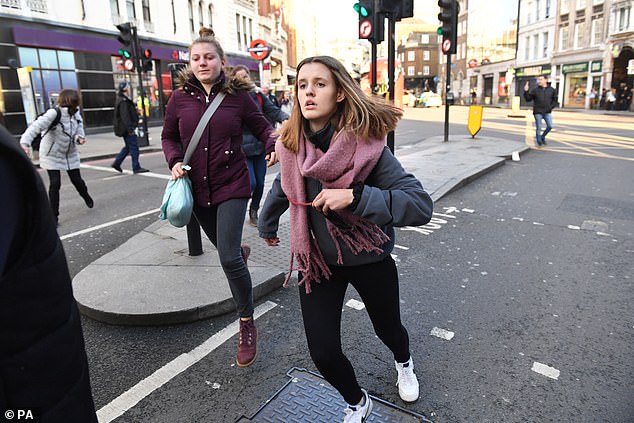 ‘All my staff have been evacuated.’

Mike King, a parish councillor at St Magnus-the-Martyr, a church near London Bridge, told BBC News that members of the public were directed into the church by police.

He said: ‘They were directed inside by police outside, directing people to go into the buildings nearby, as you know there are a number of offices near to us.

‘So everybody has been ushered into offices and buildings close by, we’ve had a number of people come in to see us.’ 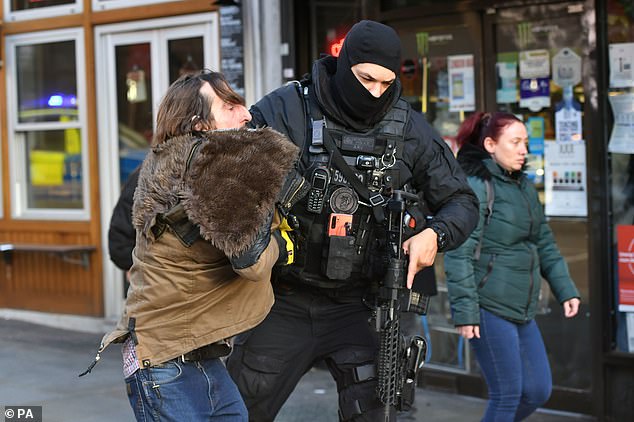 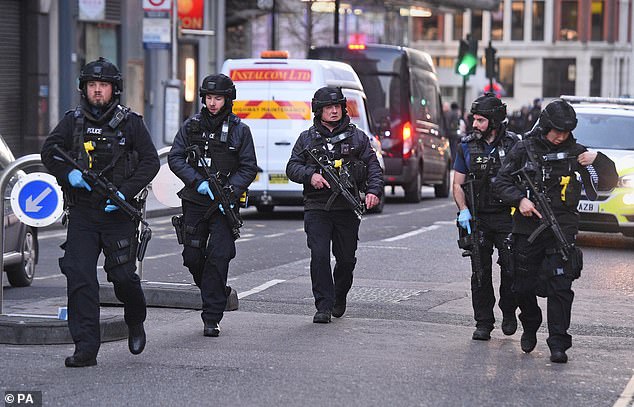 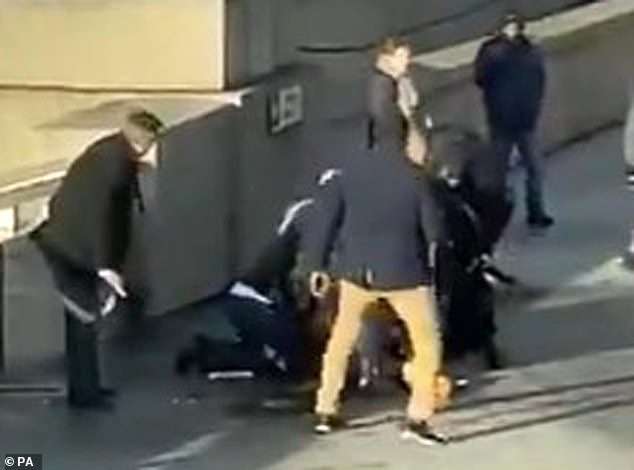 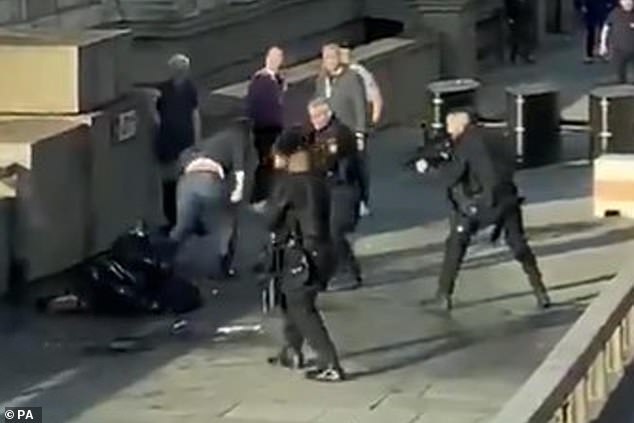 He added: ‘We heard a noise that I thought was firecrackers going off earlier on.’

A witness who works in a stall in Borough Market, said it looked like a minor incident at first.

Laurence Verfaillie said: ‘I thought it was a car crash, it looked like it was pretty minor.

‘Suddenly a trader told me the ice cream seller on the bridge has run away yelling there has been an incident.

‘Another trader said police were looking for someone.

‘Suddenly people were taking refuge in our shop before we got told to leave.

‘We still think about what happened last time.’

Kelby McNally, works in the Northern and Shell Building on Lower Thames Street near to London Bridge.

She said: ‘I was coming out of Pret on Eastcheap and there were loads of people just running, I thought it was a fire alarm or something, and then I saw two girls from my office who told me not to go back there.

‘I asked what had happened, and they said they had heard gunshots and now everyone is running. 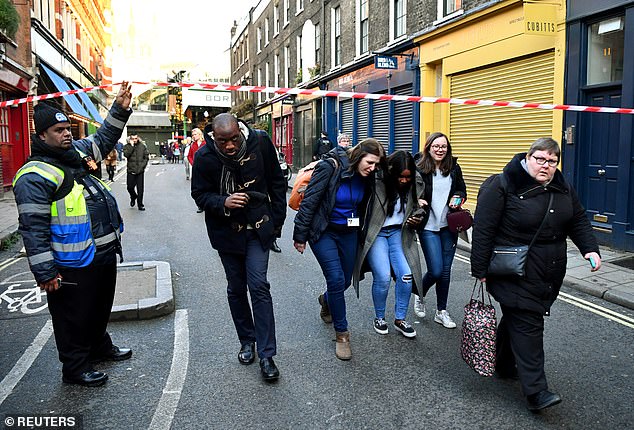 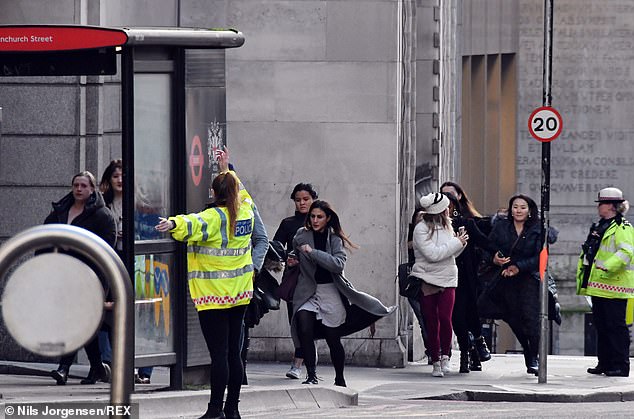 ‘Everyone was running, so then we came to where the Sky Garden building is and the security guards let everyone in.

Pub-goers were also told by police to leave immediately and run as gunshots were heard in the London Bridge area.

Luke Redman, 25, was in the Monument pub with a full pint when officers entered.

Mr Redman, a data scientist said he heard ’12 or 15 (gunshots) in about 10 seconds,’ as he left the pub and ran down an alleyway to escape.

Witness Amanda Hunter, who was on a bus across the bridge when she heard shots fired, told BBC News: ‘The bus all of a sudden stopped and there was commotion and looked out the window and I just saw these three police officers going over to a man.

‘It seemed like there was something in his hand, I’m not 100% sure, but then one of the police officers shot him.

‘We were stopped on a bus for only a minute or a minute-and-a-half, and then we were able to safely get off the bridge.’

Workers inside another office block overlooking London Bridge have been told to stay inside.

Met Police officers are understood to have the buildings next to the scene on lockdown.

Staff from all companies based at One London Bridge, the closest building to the incident, have been told to stay put, according to spokesperson for a firm based there.

A spokesperson for Howard Kennedy, a law firm based at One London Bridge, said: ‘The building has been shut down.

‘Met Police officers have told our staff to stay inside the building.

She added: ‘I understand it is the same situation for all of the companies based in the building.’