We show you how to make sense of the mortgage mayhem

WHY IS THE MARKET BOOMING NOW?

A stampede of home movers looking to cash in on the stamp duty holiday is wreaking havoc on the housing market.

Many are desperate for more space after months of lockdown, and keen to make the most of the tax saving worth up to £15,000.

Demand from buyers was already soaring before the property market was temporarily frozen in March and rocketed again when it reopened in late May. Chancellor Rishi Sunak’s announcement in July of no stamp duty on the first £500,000 of purchases completed before March 31, 2021, then threw fuel on the fire.

Last week, official figures revealed house prices had surged in every region in August. But experts warn the rally cannot last now the Government is scaling back financial support for households and businesses.

IS THERE REALLY A HOME LOAN DROUGHT?

August was the busiest month for lenders in 13 years, with firms approving more than 80,000 mortgage applications, according to the Bank of England. In a desperate bid to curb demand, overwhelmed lenders are hiking rates and withdrawing deals so often that brokers can’t keep up.

The number of mortgages available has halved since the start of the year, according to analysts Defaqto.

The clampdown has particularly hurt those with the smallest deposits, as lenders know that if house prices fall they are at most risk of ending up in negative equity (where they owe more than their house is worth). But even those with down payments of 15 or 20 per cent have far less choice than before the pandemic. Many banks have introduced tougher lending rules so that only the most financially secure can get a mortgage.

It means self-employed borrowers, those returning from furlough leave or workers who rely on bonus or overtime income are finding it tougher to get a loan.

Last week the Bank of England warned that all borrowers could soon find it harder to get a mortgage as lenders prepare to raise rates and tighten lending criteria.

WHAT IF I HAVE A SMALL DEPOSIT?

The pandemic sent mortgage lenders offering deals to borrowers with a deposit of 10 per cent or less running for the hills.

Lockdown restrictions stopped surveyors from being able to enter borrowers’ homes and banks were unwilling to offer more risky mortgages without a valuation.

But even when the housing market reopened, not all banks resumed lending to families with small deposits amid fears that rising unemployment could spark a house-price crash.

One of the few remaining lenders accepting applications from borrowers with a 10 per cent  deposit, HSBC, was forced to withdraw from the market last month — but said the move was temporary.

TSB, Coventry Building Society and Accord, part of Yorkshire Building Society, run mortgage fire sales where 90 per cent deals are made available for one or two days only.

Currently, only one deal is widely available to these borrowers, compared with 16 in April, according to Defaqto. This is a five-year fixed rate at 3.99 per cent with Metro Bank.

Nationwide is offering a two-year fixed rate of 3.49 per cent, or 3.54 per cent for five years for first-time buyers. But they must prove at least 75 per cent of the deposit has come from their own savings, ruling out deposits gifted entirely by parents.

Regional building societies, including Darlington, Cumberland, Stafford Railway and Buckinghamshire are offering families with local postcodes a 90 per cent mortgage.

Amy Williams is rushing to buy her first home and save £4,000 before the stamp duty holiday ends in March. She says she will not be able to afford the deal if it is not completed in time.

Amy, 28, had an offer accepted on a one-bedroom flat in Camberwell, South London, in July, but is still waiting to exchange contracts. She hopes to wrap things up by the end of November. 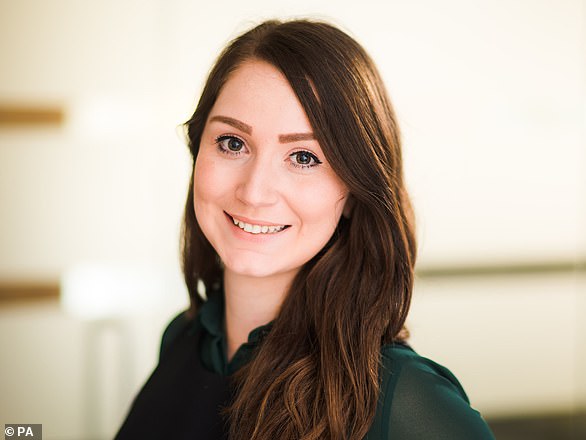 Struggle: Amy Williams is rushing to buy her first home and save £4,000 before the stamp duty holiday ends

Amy adds: ‘I had an offer accepted on the flat at the time the stamp duty holiday was announced. The timing couldn’t have been better.

‘The process has taken much longer than I’d expected but I’m on the precipice of exchanging. We’re waiting on one final piece of legal paperwork and I’m optimistic I’ll get the keys in the coming weeks.

‘But if anything goes awry with the sale now, and if the vendor were to withdraw, I’d be very nervous about being able to find a new property and complete in time to beat the stamp duty deadline.’

And Tipton & Coseley has joined Barclays by offering 100 per cent deals to borrowers whose parents agree to deposit savings or have a mortgage-like charge placed on their own properties. Borrowers with specific professions are also being offered 90 per cent deals.

Teachers Building Society will accept applications from teachers with a 10 per cent deposit, while Reliance Bank will support key workers such as NHS staff, police and postal workers.

TSB is offering first-time buyers with a 15 per cent deposit a more flexible affordability assessment to increase their chances of being approved for the loan. The bank’s five-year fixed rate is 2.99 per cent.

WHERE ARE THE BEST RATES?

Rates have risen for all but those with the biggest deposits since the beginning of March.

Borrowers with a 10 per cent deposit are now facing the highest rates since 2015.

And for those with a 40 per cent deposit, rates remain relatively unchanged at around 1.8 per cent.

Monmouthshire Building Society offers the best two-year fixed rate for borrowers with a 25 per cent deposit, at 1.6 per cent, compared with a best buy of 1.19pc six months ago.

I COULDN’T GET A LOAN WITH A 10% DEPOSIT

Wait: Laura Sears has still not received her mortgage offer

Laura Sears was hoping to complete on a two-bedroom shared ownership flat last week. But she has still not received her mortgage offer after applying for a five-year fixed deal from Barclays weeks ago.

Laura, 30, who lives in East ­London, says she has been hit by a plethora of hurdles in her quest to get on the property ladder.

She wanted a two-bedroom flat with a balcony and decent-sized kitchen not too far from her work for around £300,000 using a 10 per cent deposit.

But lenders began withdrawing 95 per cent and 90 per cent deals leaving her unable to buy the property in Hornchurch.

Her only option was to use the Government’s Shared Ownership scheme. She applied for a 25 per cent share of a £330,000 two-bedroom flat in Colindale, North-West ­London, and says: ‘I am chasing my mortgage broker for updates every two days — but he says there is a massive backlog.

‘I knew things were going to take a while and I was reluctant to tell people I was buying a flat in case I was tempting fate. Luckily the vendor says he is in no rush. Still, I hope to be in by Christmas.’

COULD DELAYS MEAN I’M LIKELY TO MISS OUT?

Experts say delays are so bad up and down the property chain that movers need to apply for a mortgage no later than November to be in with any chance of beating the stamp duty holiday deadline in March.

It takes an average of 160 days to go from agreeing a sale to moving in — up from 95 days last year, according to property data analysts TwentyCi. And as the stamp duty deadline draws closer, experts fear delays could spiral further.

As many staff have been furloughed or are working from home, banks and building societies are now taking weeks rather than days to review mortgage applications. Surveyors and solicitors are also warning of long delays as they struggle to keep up with the buying frenzy. Some legal firms have already stopped taking on new cases. And as solicitors struggle to cope with a 50 per cent rise in transactions, more than 300,000 sales are tipped to miss the deadline. Colin Bradshaw, from TwentyCi, says: ‘Solicitors are trying to deal with nine months’ business in six months.’

WHAT IF I NEED TO REMORTGAGE?

If your current mortgage deal is due to expire in the next two months, start the remortgage process now. Lenders are predicting more than £30billion of deals will be up for renewal at the end of the year, putting even more strain on lenders’ resources.

A standard remortgage takes six weeks to complete, but brokers are warning it could take a further four weeks because of the bottleneck. To avoid falling on to your bank’s costly standard variable rate, which you pay once your mortgage deal ends, brokers are urging those with loans nearing renewal not to delay.

The good news is that remortgage borrowers may find their new rate is largely the same as their old one, or it may even have gone down. According to Moneyfacts, the average two-year fixed rate now is 2.44 per cent.

Compared to average two-year fixes in October 2018, you would be paying 0.05 per cent less. If your five-year fix is about to end, and you want to choose another five-year deal, you are likely to be paying even less. 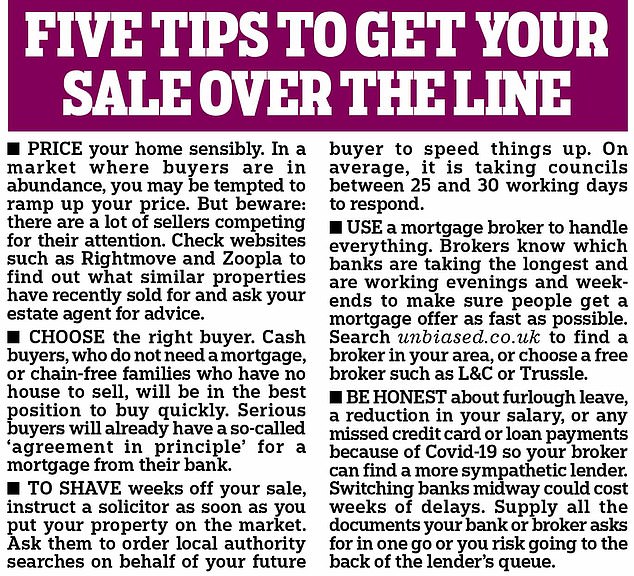 If your circumstances have changed since the start of the pandemic, such as a reduction in your salary or you were placed on furlough leave, another lender may be reluctant to take you on as a new customer. Don’t panic. Your own bank is likely to offer you a new deal and some lenders give their existing borrowers better rates than new customers.

SHOULD I WAIT TO FIX MY RATE?

The Bank of England base rate is already at a record low of 0.1 per cent, but there are whispers it could be cut to zero or below to stimulate spending and lending. But that doesn’t mean mortgage rates will follow — and it’s highly unlikely you would ever be paid for having a loan.

However, if the mortgage market starts to cool early next year, as expected, rates could begin to fall.

Rachel Dixon, mortgage adviser at RH Dixon, said: ‘It has been a crazy few months. As we see demand subside over the coming months, rates will return to more normal levels.’ So it may pay to hold off locking into a fixed-rate deal.

If you opt for a variable-rate deal in the meantime, these tend to have lower or no early repayment charges if you want to switch later.

The cheapest 85 per cent two-year variable rate with no exit penalties is with West Brom BS at 2.34 per cent, compared to Lloyds Bank’s fixed rate at 1.8 per cent.

Both are for remortgage only.

Mortgage rates are still ultra-cheap compared to a decade ago when a typical borrower with a 10 per cent deposit might have paid 6pc as opposed to 3.99 per cent today. So if you can afford the repayments, you may prefer the peace of mind a fixed deal can offer.