‘We were extra hungry’: Raheem Sterling says Manchester City have the ‘energy and fight’ for Champions League glory after beating Real Madrid to reach the last eight

Raheem Sterling insists Manchester City are ‘hungry’ for Champions League success and have the ‘energy and fight’ needed to progress in the competition.

City claimed a deserved place in the quarter-finals with a 2-1 victory against Real Madrid at the Etihad Stadium on Friday.

Sterling and Gabriel Jesus took advantage of Raphael Varane errors to score either side of a Karim Benzema equaliser and complete a 4-2 aggregate victory over the 13-time winners.

After a gap of more than five months between the two legs of a pulsating tie due to the coronavirus pandemic, City now go forward to the newly-arranged last-eight tournament in Lisbon and will face Lyon on August 15.

As City look for a breakthrough first win in the Champions League, Sterling said: ‘We were extra hungry (against Real Madrid).

‘I think the mentality since we got back in – day one after lockdown – has been how much we want this. We’ve got energy to progress in this competition. Energy and fight – we showed that against Madrid throughout the game. 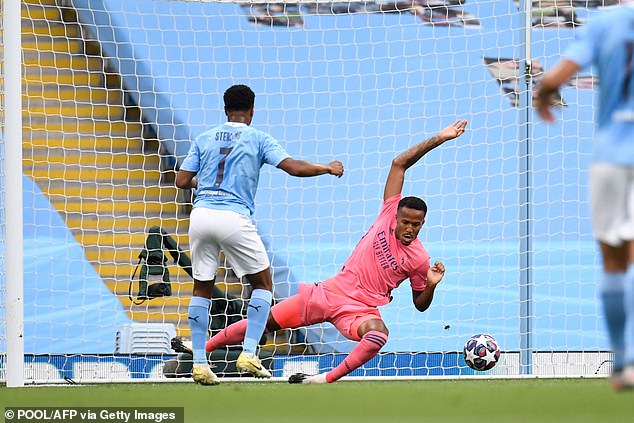 ‘The most important thing is to run and give 100 per cent for every minute we are in the competition.

‘It’s a new format and it’s one we are ready for. All we can do now is go over there and run our socks off. That will make the difference and decide whether we progress or not.’

After the win over Madrid, City boss Pep Guardiola singled out Jesus for particular praise. The Brazilian has had to shoulder the burden of leading the attack in the absence of injured top scorer Sergio Aguero.

Sterling joined his manager in his appreciation of Jesus, but emphasised that the striker was not merely a back-up for Aguero.

‘He’s not a sub, we’ve got two great strikers at this club,’ said the England forward. ‘Both strikers score goals and when you play with either one of them you know what you expect from each of them.