A hunting-themed wedding cake that shows a bride holding a rifle under her arm while dragging her groom’s body is being slammed online, as critics call it ‘trashy’ and ‘gross.’

A photo of the custom cake was posted on Reddit’s Wedding Shaming forum, with the person who shared it writing: ‘Immediately no. Immediately no.’ While the design was beautifully executed, many agreed the theme was in poor taste.

‘The hunt is over,’ reads the sign on the front of the cake, which shows a bride in her wedding gown pulling her camouflage-wearing husband-to-be away with a hunting a rifle tucked under her arm.

‘The hunt is over’: Reddit users are slamming a wedding cake that shows a bride carrying a rifle under her arm while dragging her groom’s body in the woods 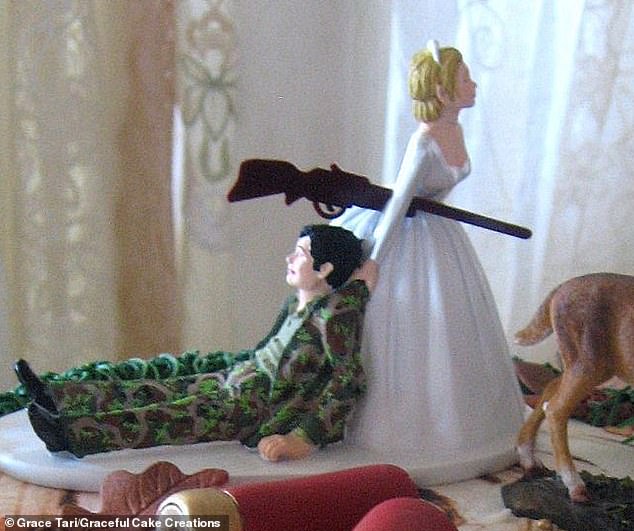 Hard to tell: Commenters couldn’t agree on whether the groom on the cake is supposed to be dead, or he is just being dragged away from hunting

The intricate cake by Graceful Cake Creations was decorated to look like a tree stump, with a deer, two large bullets, and fall leaves surrounding the bride and groom.

The backlash was directed at the couple who ordered the cake, with a number of commenters pointing out that the design itself was well-done.

‘A trashy idea, but well-executed,’ one person wrote. ‘Can’t say it’s a graceful wedding cake though…’

’10/10 Bakers Points for the execution, but 0/10 What the French Fried F**ks for the content,’ someone else wrote. ‘This could be funny if Cupid had a compound bow and both bride and groom were struck by Arrows of Love or somesuch, but this “bride murders groom” thing is over the top gross.’

‘At least the groom isn’t bloody?’ another added.

While the design was beautifully executed, many agreed the theme was in poor taste, with critics calling it ‘trashy,’ ‘tacky,’ and ‘gross’

Commenters couldn’t agree on whether the groom is dead or just being dragged away from hunting to get married, with many agreeing that both were troubling.

‘I don’t think it’s “bride kills groom” but “bride stops groom from going hunting again and pulling him away from it,”‘ one person explained. ‘But I agree it’s horrible because it definitely implies the wrong thing.’

A few people defended the couple’s cake, though they admitted they would never choose it for themselves.

‘Everyone here is misunderstanding it. It’s word play. The bride “bagged” herself a husband. That’s why “The hunt is over.” The Hunt for her husband is over,’ one Reddit user noted.

‘I guess you could look at it as “the bride murdered the groom,” but it’s really missing the whole point of it. It’s meant to be playful. I still would never use it as a wedding cake myself, but maybe the groom/they are just really into hunting and who are we to judge that?’

Not for me: A few people defended the couple’s cake, though they admitted they would never choose it for themselves

‘I’m from an area where these types of cakes are common,’ someone else added. ‘It’s usually a joke about the woman isn’t on the hunt for a man anymore. It’s not murderous and the groom’ll be out in a stand come deer season.’

Regardless of the true meaning of the cake, the majority of the commenters were against it and thought it was ‘tacky.’

‘Just why? Why display imagery that shows that the groom was “forced” into marriage?’ one critic asked. ‘It’s supposed to be a partnership, and I don’t understand the appeal of this at all.’

The owner of Graceful Cake Creations told DailyMail.com in an email that the cake was not an original design, and it was actually a groom’s cake — not a wedding cake.

The topper of the bride dragging the groom has been around for 10 years in various forms, according to the baker, and is quite a popular theme for a groom’s cake.

‘I think the point is she got her man so the hunt for a husband is over,’ the baker explained, noting that ‘no one was shot’ in the depiction.