People who have a gastric band or bypass are 61 per cent less likely to develop melanoma, which can spread to other organs, a Swedish study found today.

Bariatric surgery lowers the risk of non-melanoma skin cancer, which is less serious and rarely spreads, by 42 per cent, the research adds.

It is unclear why weight loss lowers the risk of melanoma more than other forms of the disease.

Melanoma affects around 15,000 new people every year in the UK.

‘Obesity is a melanoma risk factor’

The researchers, from the University of Gothenburg, wrote: ‘In this long-term study, bariatric surgery reduced the risk of malignant melanoma.

‘This finding supports the idea that obesity is a melanoma risk factor and indicates that weight loss in individuals with obesity can reduce the risk of a deadly form of cancer that has increased steadily in many countries over several decades.’

These were compared against 2,040 people who did not have such surgeries.

Skin cancer diagnoses were recorded between surgeries and an average of 18 years later.

The findings were presented at the European Congress on Obesity in Vienna. 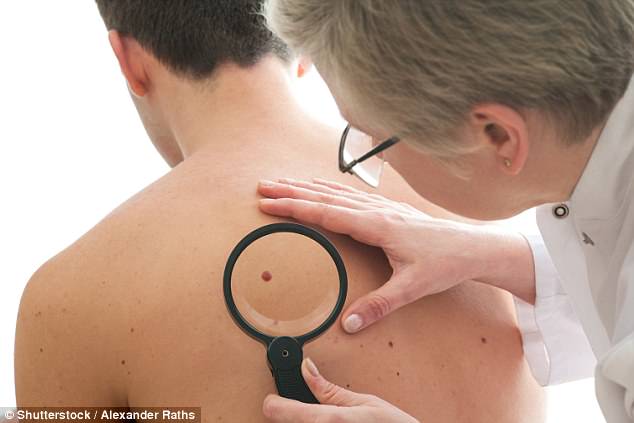 Alcohol increases the risk of skin cancer by up to 11%

This comes after research released last August suggested just one glass of wine a day may increase the risk of certain forms of skin cancer by up to 11 per cent.

For every extra 10g of alcohol a day, the risk of developing basal cell carcinoma (BCC) rises by seven per cent and cutaneous squamous cell carcinoma (cSCC) by 11 per cent, a study found.

This is equivalent to a small glass of wine or half a pint of beer.

BCC and cSCC are abnormal, uncontrolled growths that arise in the outer layers of the skin, but in different cell types.

Past research suggests the ethanol in alcohol can metabolize into acetaldehyde, which is a chemical compound that damages DNA and prevents its repair.

The researchers of the recent study argue alcohol is a preventable and modifiable risk factor.

Consequently, they believe their findings could help create a global-health target to reduce skin cancer’s burden.