Welcome to technicolour Toulouse! Cafes rich in scarlet and gold – and violet with everything

Toulouse, capital of the Occitanie, is France’s pink city – La Ville Rose – guarded by the Pyrenees on the Spanish border and watered by the Garonne River, which leaps through land rich in wine and crops.

History refracts from every terracotta brick: here was the heart of the Troubadour culture; here grew Bastide towns once besieged by the Black Prince; and here was born the notorious Cathar heresy that left the region soaked in blood.

I arrive late at night and awake as the sun is rising over the ancient city centre. My hotel, the Novotel Toulouse Centre Wilson, is next to the enchanting, Fabergé-like Place de Wilson.

With its hand-painted 18th Century carousel, gold and copper cafes and views of the Garonne, bridged by the 15th Century Pont Neuf, this is a place where dreams are made.

Toulouse seems a place apart from the modern world. It’s a mosaic of a city, embellished with medieval palaces, churches and basilica.

I make my way across the quiet cobbled streets, where a ban on cars has made walking into the past a year-round adventure, to les Cordeliers in rue du Taur.

Built in 1222, this captivating abbey was once the most important convent in France, and was famous for its subterranean cave where the dead nobles of Toulouse went through a process of mummification.

Part of the convent was destroyed by fire, but the chapel and the facade remain; a towering castellated steeple, whose colour changes from rose to purple as the sun rises higher in the sky.

In the same street is a marbled mansion, now overgrown with tumbling jasmine, which was once a hiding place for Cathars; the medieval sect that embraced women priests, denied the authority of the Papacy and whose members were hunted down by the Catholic church. 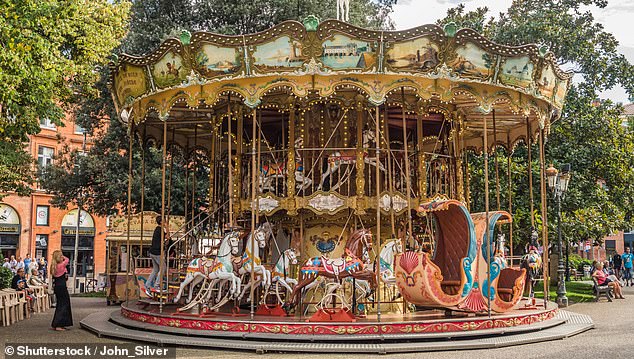 The city’s hand-painted 18th century carousel is one of many attractions, and Petronella Wyatt took a whirl on it

Yet it’s impossible to be sad in Toulouse. There is no Northern French ‘de haute en bas’, or suspicious reserve. Everyone talks to you and is delighted by my fractured French. A man playing La Vie En Rose on a concertina stops to direct me to one of the best breakfast cafes in town, Patisserie Conté in rue Croix Baragnon.

Toulouse is technicolour for the taste buds. What we think of as provincial French cooking comes from here: cassoulet, coq au vin, confit of duck and foie gras, which is eaten nightly as we might eat pasta or Indian takeaways in the UK.

I order a chouquette with candied fruit, another regional speciality, and the local breakfast dish of serpent saucisse – sausage encased in pastry.

Twice in its history, Toulouse has enjoyed an embarrassment of riches. In the early Middle Ages, the region produced large crops of a plant called pastel, which when boiled became an indelible blue dye that was exported all over Europe. These days, overtaken by cheaper modern dyes, it is still used as an anti-ageing protein in creams sold in every chemist.

In the 19th Century Toulouse became famous for violets, and my next stop is La Maison de la Violette, a painted barge on a canal on Boulevard Bonrepos. This homage to violets sells a cornucopia of products, ranging from violet confectionery to candle wax, soaps, body lotions, jams and teas, and a potent liqueur which is mixed with champagne or white wine. 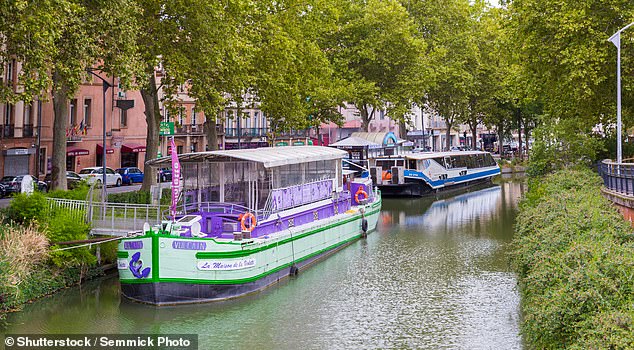 Fortified by my Kir Violette, it’s time to visit Place du Capitole, the beating heart of Toulouse. The city hall was first built in 1190, and redesigned in neo-classical style in 1750. To its right is the splendid opera house overlooking marble colonnades that front gilded bars and restaurants.

Next to the opera is the oldest hotel in the city, the Grand Hotel de l’Opera. An alleged secret tunnel here inspired the 19th Century French author Gaston Leroux to write Le Fantome De L’Opera.

I take lunch next door at the Grand Cafe de l’Opera, with its mirrored walls and scarlet banquettes. It has a reasonably priced €45 (£38) set menu typical of the region.

I stroll back past the Monastery of the Jacobins. Constructed in 1230 it is made entirely of pink Roman brick and its vaulted roof, known as Le Palmier for its single column from which the ribs radiate like fronds, remains unique in European architecture. In the reliquary by the altar are the bones of the theologian St Thomas Aquinas, the father of modern philosophy.

In Place du Wilson, I ride the carousel, feeling a childlike elation, before bathing in violet oil at my hotel. The evening is spent at No 5 Wine Bar in rue de la Bourse, voted Best Wine Bar in the World 2018. It has an astonishing 500 wines by the glass, ranging from local sauvignon to Chateaux Lafite. Few cities cater as well to the temporal as they do to the spiritual.

The streets are now bustling with locals. There is a bright moon, and the pink walls of Toulouse have become pale pearl. I walk from square to square, through tiny streets with thatched 13th Century houses to the Pont Neuf and watch the stars play on the river.