A female catering firm boss who forced a schoolgirl into sordid sex games which the victim recorded in a secret diary has been jailed for seven years.

Deborah Evans, 44, took advantage of the 15 year old girl who ‘looked up to her’ by sexually abusing her.

The girl waited 16 years before going to police and used her diary entries as evidence of what happened to her in the late 90s.

Prosecutor Michael Hammet told Cardiff Crown Court that Evans was 27 as the time she started abusing her victim.

He said the girl: ‘kept a folder of letters that she never sent. She made references to what happened to her some years before at the hands of Evans.

‘These incidents were not done willingly.

‘The victim would ask that Evans not do these things to her but she didn’t listen. She felt as though she was under Evan’s control.

‘Whether she allowed these things to happen or didn’t put up much of a fight doesn’t matter.

Evans, who was jailed for seven years, arrives at Cardiff Crown Court (left) and in her chef’s gear at work (right)

Evans, of Ely, Cardiff, was found guilty of 11 counts of indecent assault on a girl aged under 16 between October 1999 and February 2000.

The victim, now in her 30s, told the jury that she initially liked Evans’ ‘rebellious side’, but she soon made advances when they were alone.

She said: ‘I thought she was great. Funny. She had a rebellious side and I liked it. We got on fine and there were no problems.

‘I said I didn’t want to kiss her. She had never said anything like that before or suggested she was interested in me in that way.’

She added Evans would ‘belittle her in front of friends’ and forced her to perform sex acts at her home over five months.

Evans, who owns and runs Cardiff Cuisine Catering, was jailed for seven years and must also register as a sex offender indefinitely.

A victim impact statement from her victim read: ‘She’ll never be able to explain the effects of the abuse.’ 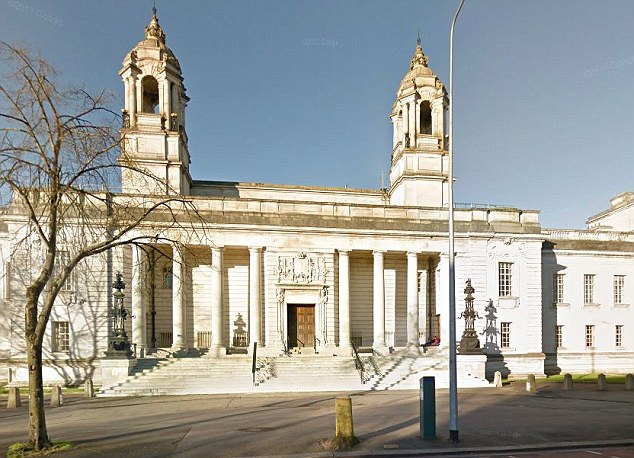 She added that her life had ‘spiralled beyond control’ after what Evans did to her.

Jailing her for seven years. Judge Michael Fitton QC said: ‘The victim was groomed and managed to satisfy your own desires.

‘There was overwhelming evidence that the harm she suffered was severe.’