A Welsh man who spent over half a year battling Covid at home is thought to have become the first person in the world to be cured of the virus by getting vaccinated.

Ian Lester, from Pontypridd, who has a rare genetic immunodeficiency, got infected in December 2020, before jabs were widely available.

During his seven-and-a-half-month illness, the optician suffered with chest tightness, headaches and extreme fatigue.

He wasn’t able to get vaccinated when immunocompromised people were invited to get the jab because he was still testing positive for the virus.

But scientists at Cardiff University decided to give him two doses of Pfizer’s jab, one month apart, in the hope it would work as a therapeutic and help his immune system finally clear the virus.

Results showed levels of the virus plunged 64-fold within a fortnight of the first jab, showing how quickly the vaccine had an effect.

Mr Lester was eventually declared Covid-free in August, 72 days after getting his first vaccine.

The case, detailed in a medical journal, is thought to be the first time a vaccine has been used as a treatment for Covid. The current jabs are used to prevent people who are not infected from becoming seriously unwell if they catch it.

Ian Lester, from Pontypridd, caught Covid in December 2020 and suffered from chest tightness headaches and extreme fatigue during his seven-and-a-half-month-long infection 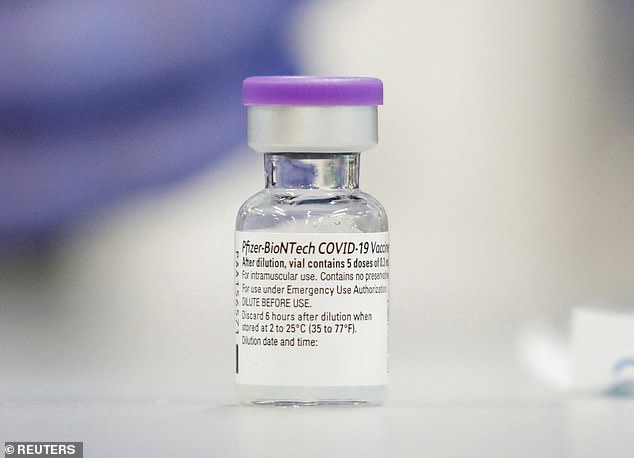 Scientists at Cardiff University eventually rid him of the virus in August 2021 by giving him two doses of the Pfizer vaccine (pictured). The jab boosted his antibody and T-cell levels, allowing him to fight off Covid

Dr Mark Ponsford, one of the doctors who treated Mr Lester, described seeing the eventual negative test as ‘a pretty astonishing moment’.

He said the vaccine was ‘remarkably’ well-tolerated by Mr Lester who previously had a limited response to conventional jabs.

HOW COULD COVID VACCINES WORK AS A THERAPEUTIC?

A Welsh man who spent over half a year battling Covid at home is thought to be the first person in the world to be cured of the virus by getting vaccinated.

Ian Lester, from Pontypridd in Wales, who has a rare genetic immunodeficiency, was infected for seven-and-a-half months.

Around five months into his infection, a team of scientists from Cardiff University suggested testing whether vaccinating him would rid the infection.

People usually have to wait until they are virus-free before getting the vaccine.

The current jabs are used to prevent people who are not infected from becoming seriously unwell if they catch it.

But the scientists believed the vaccine could trigger an immune response to ‘support viral clearance’. They administered two Pfizer jabs, one month apart.

Results showed an ‘enhanced’ T cell and antibody responses 14 days after the first dose, while levels of the virus in the infected man’s nose and throat swabs fell 64-fold.

The team found the vaccine triggered an antibody and T cell response sufficient to clear the infection, which was not triggered by the body in response to the virus.

Some 72 days after getting his first jab, Mr Lester was declared virus-free.

The team said the case suggests Covid vaccines enable the immune system to eradicate the virus.

Scientists say the results suggest that Covid jabs can kick-start the immune system of immunosuppressed people with ‘persistent’ infections, which can leave them battling illnesses for decades in rare cases.

Mr Lester suffers from Wiskott-Aldrich syndrome, a rare genetic disorder which prevents him from being able to form blood clots.

Sufferers are more susceptible to infections, and can bruise and bleed easier.

Mr Lester said he was ‘shocked’ when he tested positive in December 2020, as his only symptoms were a loss of taste and smell.

He informed the immunology centre at University Hospital of Wales, where he had been treated for Wiskott-Aldrich syndrome since childhood.

Doctors sent him regular PCR tests to take at home, over concerns that those with immune deficiencies could stay contagious for longer.

His swabs continued to come back positive. And his symptoms — including extreme fatigue, sleeping problems, headaches and chest tightness — continued to worsen the longer he had the virus.

Mr Lester said: ‘Although most people are able to stop isolating after 10 days of contracting the virus, I was an exception to the rule. Each test came back positive, time and time again.

‘Months passed, which felt like a lifetime when you’re not able to go anywhere or see friends or family.

‘Each positive Covid swab (which were taken every 10-14 days) left me feeling more deflated and anxious.’

He added: ‘I began to feel like I was a prisoner in my own home and the days blurred into months.

‘By June 2021, when social gatherings were being allowed again, I was feeling very frustrated and started to doubt I would ever become negative.’

Mr Lester’s condition was different from long Covid, when people still experience lingering virus symptoms after they are rid of the infection.

He wasn’t eligible for anti-viral drugs because he wasn’t hospitalised.

Doctors suggested using Pfizer’s Covid vaccine to help fight the virus, which Mr Lester said he was ‘more than willing to try’.

People usually have to wait until they are virus-free before getting the vaccine.

Professor Stephen Jolles, of the immunology centre, said his team decided on the ‘unique therapeutic approach’ given the impact of the persistent positive PCR tests on Mr Lester’s physical and mental health.

Fifth Covid jabs could be rolled out this autumn, the Health Secretary has suggested in the strongest hint yet that the vaccination programme will be expanded again.

Grilled this morning about whether another booster campaign was in the works, Sajid Javid claimed it was ‘possible… probably for those that are 50 and over’. But he added a ‘final’ decision was yet to be made.

Over-75s, care home residents and patients with weak immune systems will begin receiving invitations for a spring Covid top-up from today, in order to bolster the immunity levels of millions.

If they are offered another jab in the autumn, it will be their fifth. Some immunocompromised adults will have already had five by then.

Mr Javid also revealed No10’s ‘level of concern has not changed’ over the past two weeks, despite the rise in infections and hospitalisations. He said the numbers ‘are still way below their peak’.

He also urged people to treat Covid like any other infectious disease, and ‘behave sensibly’ if they were feeling unwell or experiencing symptoms — including socialising less and staying indoors to avoid spreading the virus. He gave the advice ahead of England ending its free testing offer from next Friday.

Five million Britons became eligible for second boosters today, with the first 600,000 expected to be invited this week.

The move comes after the Joint Committee on Vaccination and Immunisation (JCVI) recommended the spring top-up as a precautionary measure.

‘We wondered whether therapeutic vaccination could help in finally clearing the virus by inducing a strong immune response within the body,’ Professor Jolles said.

Mr Lester received two doses of Pfizer’s jab, one month apart, which ‘very quickly’ triggered a strong antibody response that was ‘much stronger’ than that triggered naturally, the scientists said.

The case report, published in the Journal of Clinical Immunology, shows there was also a strong T-cell response – the arm of the immune system thought to be crucial to fighting off the virus.

The team did not clarify how quickly his body reacted to the jab, other than saying how detectable levels of virus in his swab plunged within two weeks of the first jab.

A negative test in August finally confirmed the virus had been eradicated, 218 days after it was first detected.

Mr Lester said: ‘I was over the moon and beyond relieved to finally be negative and get my life back on track.’

He added: ‘To our knowledge, this is the first time mRNA vaccination has been used to clear persistent Covid infection.

‘Importantly, the vaccine was well tolerated by the patient and successfully induced a strong antibody and T-cell response.

‘This was remarkable given Ian’s response to conventional vaccinations in the past has been extremely limited.’

Researchers will still need to test the vaccine as a treatment in more patients with prolonged infections before concluding that it can work.

Dr Ponsford said: ‘We have all seen how vital vaccination is to the ongoing fight against the global pandemic.

‘But our study is the first to highlight the exciting potential for it to be used as a treatment in persistent infection.

‘While genetic causes of immunodeficiency are rare, there are many more individuals whose immune system have been suppressed because of their medical conditions and treatments.

‘We should be alert to persistent Covid infection in this setting and develop the tools to respond accordingly.’