Welton primary school bans kids from choosing who they play with

Furious parents have blasted a primary school for ‘strict’ school rules which ban their five-year-olds from choosing who they play with during breaks.

At Welton Primary School in Brough, East Yorkshire, pupils are divided into colour-coded groups and must take part in an activity determined by the school – a policy which they claim helps children make ‘good progress’.

Pupils who want to sit and chat with their friends can do so in a quiet area, and peer mentors are there to look after children who can’t find anyone to play with.

Concerns over the rules were raised after the school’s headteacher sent a letter to parents telling them that teachers ‘actively discourage’ socialising in the classroom.

At Welton Primary School in Brough, East Yorkshire, pupils are banned from choosing who they play with during breaks. They are instead divided into colour coded groups and must take part in an activity determined by the school

The letter informs parents new classes are formed each year in a ‘strategy’ which enables pupils to ‘develop and build skills that will be very important to them as they grow up’.

One mother, whose child is moving into Year 1, described actively discouraging socialisation as ‘horrific’.

She said: ‘The kids are dictated to about who they are to play with – it’s weird.

‘It’s the only free time they have. It would be like telling a colleague they had eat lunch with somebody specific.

‘The kids are banded like yellow etc. and that’s who they have to play with. They should be able to free play. Apparently the “children come in calmer”.’

She said she spent a lot of time researching schools before her child joined last year, but was not made aware of the playground rules from Year 1 upwards and also did not know classes were mixed up each year.

She said: ‘I really don’t know what is going on in the headteacher’s head, saying socialisation is a “barrier to to pupil outcomes”.

‘The sentence seems harsh and at odds with children’s need for socialisation and their mental health and wellbeing. Is this child focused and is it nurturing?

‘Other schools keep children together as a class but here they also purposely split them, even from foundation. I don’t like that.

‘I wasn’t told anything about this policy when we joined, and we spent a lot of time looking into schools and discussing child focused approaches, etc. We just got the letter in the bags on Friday 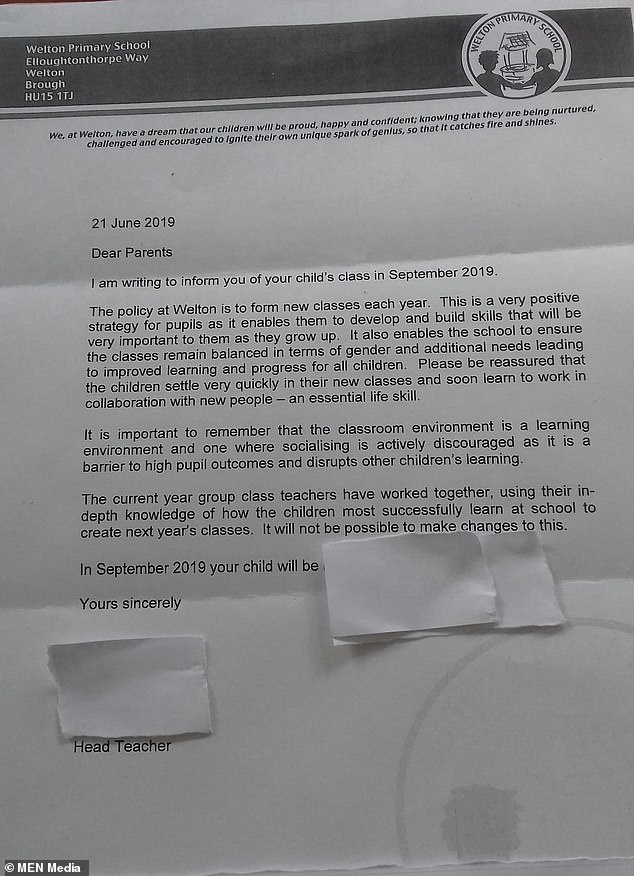 One mother, whose child is moving into Year 1, said: ‘The kids are dictated to about who they are to play with – it’s weird.’ Pictured: a letter informing parents about the rules at the school

‘I think they have a difficulty with classroom control possibly and this is why they are doing it. Can six to seven year olds really be that hard to manage? It’s controlling.’

‘At playtime they have a band system for activities so if the children don’t get there quick they miss out – once you are in a zone you can’t swap – a bit like a prison.

‘My child is desperate to move schools because of it. They also are not allowed to play football either and can only run in certain zones.

‘They sell it well, but it’s not that popular with parents or the children.’

She said: ‘At Welton we have been forming new classes each year since we grew to have two classes in each year group eight years ago.

‘Parents tell the school that the relationships the children have with each other are one of the things that impress them about the school.

‘The current class teachers meet together to form two new classes that provide a balance of abilities and gender. They work hard to make sure all the children have friends in their new classes.

‘While we are keen to see the children making friends, socialising in the classroom is discouraged to ensure that their lessons are inclusive of all children working as a team, regardless of their external friendship group.

‘Every class has the same set of school expectations that encourage children to get better at working together and to ensure that the children are able to use their social skills in a way that help each other to learn and make good progress.’

Mrs Pidgeon said the playground rules have been in force for the past 10 years.