Wendy Harmer: ‘Miracle of Christmas’ as elderly women have $200 bill waived by Woolworths

Broadcaster and author Wendy Harmer has revealed that the hands of two elderly women were ‘shaking’ after their $200 Christmas shopping bill was waived by a Woolworths store manager.

Harmer was in the Woolies branch at Warriewood on Sydney’s northern beaches on Monday and saw what happened first-hand.

‘My daughter and I were doing our Christmas grocery shopping and the women were a couple of aisles over,’ she told Daily Mail Australia.

‘We just noticed out of the corner of our eyes that there was a bit of distress.

‘One of the women had a walking frame and she was very frail, and there was another elderly lady with her.’

Harmer heard the cashier telling the women that the shop didn’t take a cheque, with which the women wanted to pay for the grocerie.

The more mobile of the two women then offered to go to the bank to get cash.

‘She was worried about leaving her friend behind. She headed off for a few minutes but was for some reason unable to get the money from the bank,’ Harmer said.

The former ABC radio host was beginning to think she should intervene in some way.

‘By the time I thought ‘oh my gosh, I should help out here’, it had been resolved,’ she said.

‘We heard the manager say ‘Merry Christmas’ to the women and off they went.’

With her natural broadcaster’s interest in finding out more about what happened, Harmer went up to the women outside the shop and spoke with them.

‘I said ‘My gosh, what just happened there?’ They said ‘They paid for our bill’. 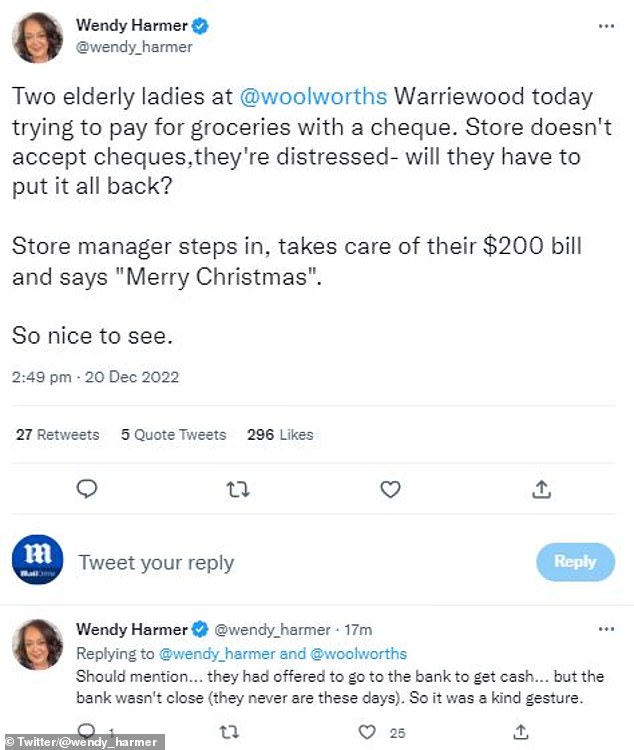 Broadcaster and author Wendy Harmer, who lives in the area, shared the story on her Twitter account (pictured)

‘They showed me their receipt and it was almost $200.

‘The woman who was the carer for the other recognised me from TV and said, ‘Could you please put this on television?’

Harmer, who lives in the area, said she didn’t know if she could get it on television, but would try to get the word out, which she did on her Twitter account.

‘I don’t think they knew what Twitter was, but I did promise I would mention that kind deed, and it seems to have struck a chord with folk.’

She said she had never before came across anything like that. ‘I was very surprised that it was for so much. They had quite a bit of stuff in their trolley.

‘The women were pretty shocked as well. 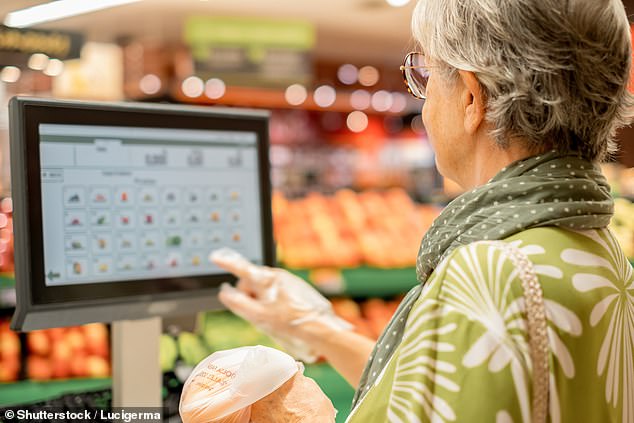 The two elderly women were shopping at Woolworths, Warriewood on Sydney’s northern beaches on Tuesday and tried to pay for groceries with a cheque – a method no longer accepted by the store

‘They were standing there in disbelief with their hands shaking, they were really affected, so it was quite a nice thing to have happened.’

Harmer said that though both the women were elderly, one was a carer for the other.

‘One woman said she was ‘looking after’ the other. She was a little bit younger than the other woman, who was very frail.’

Since she revealed the story, Harmer said ‘A lot of people were saying they were scammers.

‘Well, if they were scammers, why would they ask me to put it on television?’ 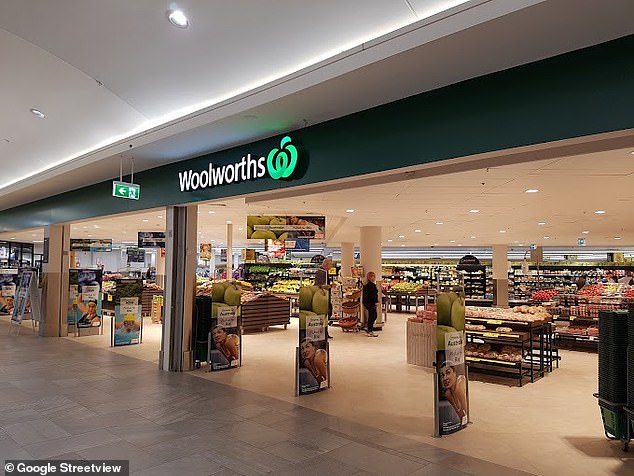 A manager at a Woolworths supermarket paid for two elderly customers’ groceries after they had tried to pay by cheque. Pictured is a Woolworths shop

Contacted by Daily Mail Australia, Woolworths revealed it had been running a ‘season of good acts’, with at least 1,000 ‘surprise and delight’ moments for customers – one per store, nationwide.

‘As our store teams know their local customers best, we left it to them to choose who to surprise, and what the gift could be,’ said Woolworths operations manager Gary O’Donnell.

‘Some of the special moments have included our stores paying for a customer’s trolley of groceries, gifting a hamper of goodies, or providing a young family with their Christmas ham.’