‘We’re getting a good kicking’: Labour erupts in civil war over Brexit

As the party tore itself apart over its stance on a second referendum, he branded Labour’s deputy a ‘poor imitation of Machiavelli’.

Mr Watson had claimed that Labour must come out strongly in favour of a second referendum, or face electoral oblivion.

However, shadow chancellor John McDonnell had insisted the party had been right to ‘tread a really difficult road’ of trying to bring Leave and Remain supporters back together by not committing to a People’s Vote.

And Mr McCluskey, general secretary of the Unite union, hit out at Remainers demanding a second referendum.

‘Tom Watson’s already out, surprise surprise, trying to take on the role of Prince Machiavelli, but I’ve got news for Tom,’ he said. ‘Machiavelli was effective. He’s a poor imitation of that.

‘If he’s trying to turn Labour members against Corbyn and in his favour, then he’s going to lose disastrously.

‘And there will be others in the coming days who try and do the same – now is the time to hold your nerve, because a general election which is the only thing that will resolve this situation, is closer now than anything.’

Writing in The Observer, Mr Watson had said: ‘Polls show Labour has been losing up to four times more voters to parties giving full backing to a People’s Vote than to [Nigel] Farage.

‘And those same polls show we would have beaten him by a country mile if we had unambiguously backed a public vote on any form of Brexit.’ 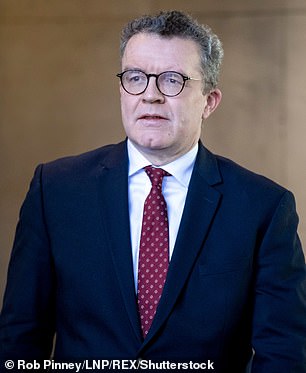 Mr McDonnell said his party was braced for a ‘good kicking’ in the election.

Deputy Labour leader Tom Watson said the party must ‘find some backbone’ and fully commit to a second referendum on Brexit to have any chance of winning the next general election.

A dismal set of results – particularly if votes drift to pro-EU rivals the Lib Dems, the Greens and Change UK – could heap pressure on Jeremy Corbyn to change course.

But Mr McDonnell told Sky News: ‘It would have been easy to go to one side, go to the Remain side and ignored all those people who voted Leave – that’s not the nature of our party.

‘We are the party that is trying to bring people back together again.

‘That’s been difficult electorally for us in these elections, of course it has.

Mr Watson said: ‘Our performance (in the European elections) is a direct result of our mealy-mouthed backing for a public vote on Brexit when it is being demanded loud and clear by the overwhelming majority of our members and voters.

‘Polls show Labour has been losing up to four times more voters to parties giving full backing to a people’s vote than to (Nigel) Farage.

‘And those same polls show we would have beaten him by a country mile if we had unambiguously backed a public vote on any form of Brexit.’

He added: ‘Never again can we find ourselves hedging our bets when we needed to make an historic choice about which side we’re on.’