Britain is sending extra troops to Iraq to bring the defeat of Islamic State a ‘step closer’, the Defence Secretary announced last night.

Sir Michael Fallon said the deployment of 44 troops to Anbar Province would support the coalition effort as it enters its final phase.

British troops will work in non-combat roles at the Al Asad airbase to construct a squadron headquarters, accommodation and offices.

Military officials said their arrival, which will bring the total number of British troops in Iraq to over 600, would free up coalition personnel to fight Islamic State in the region.

Sir Michael said: ‘We are stepping up our contribution to the fight against Daesh and fulfilling Britain’s role as a key player in the global coalition.

‘Daesh is being defeated. Iraqi forces, backed by coalition airstrikes, have now liberated 70 per cent of the territory Daesh held and the victims of its barbarism are being helped by our humanitarian support.

‘These extra troops will help support operations to bring the defeat of Daesh a step closer.’

Yesterday, Iraqi Prime Minsister Haider al-Abadi, announced that his country’s security forces, with the help of a coalition involving the UK, had liberated Tal Afar, one of the last ISIS strongholds in the country.

In response, Sir Michael said: ‘I congratulate Prime Minister Abadi, and all of the Iraqi Security Forces who are fighting on the ground with great bravery and care to end Daesh’s barbarous presence in Iraq.

While the Iraqi forces and the Coalition have ended Daesh’s control in the Tal Afar area, the task is not yet done.

The UK will continue to support the Iraqi Security Forces in their efforts to finally clear Daesh from their country.’ 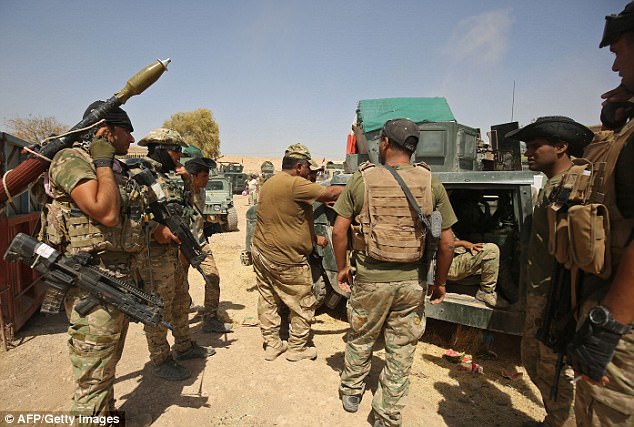 Military officials said their arrival, which will bring the total number of British troops in Iraq to over 600, would free up coalition personnel to fight Islamic State

The extra UK troops being sent, from 5 Armoured Engineer Squadron, 22 Engineer Regiment in Tidworth, will be deployed to Iraq for around six months.

In addition, RAF aircraft have carried out around 1,400 strikes against Islamic State from their base in Akrotiri, Cyprus.