At the final whistle Sean Dyche strode onto the Hawthorns pitch with the same sure-footed style his team had just employed to applaud Burnley’s fans and perhaps allow himself to contemplate the prospect that this fine season could yet get better.

A third win in a row means Arsenal in sixth are only two points ahead of Dyche’s team and though they have a match in hand against Stoke, Burnley are very much in pursuit. They are a team who know what they are about and how to earn Premier League wins.

It is the antithesis at West Brom, a club that appears to have given up on this campaign. Supporters stayed away in numbers, players failed to show up either, and in Alan Pardew there is a manager counting down the days until the summer and the confirmation of an inevitable parting. 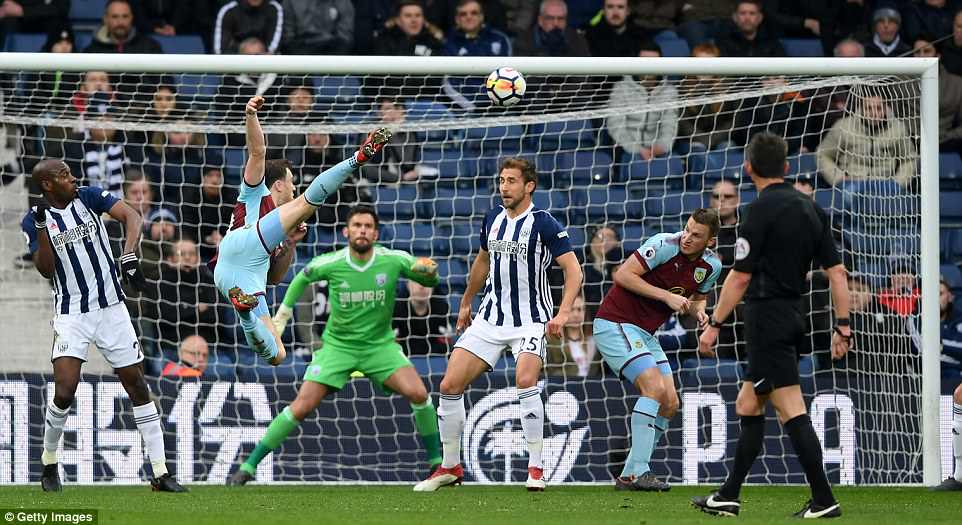 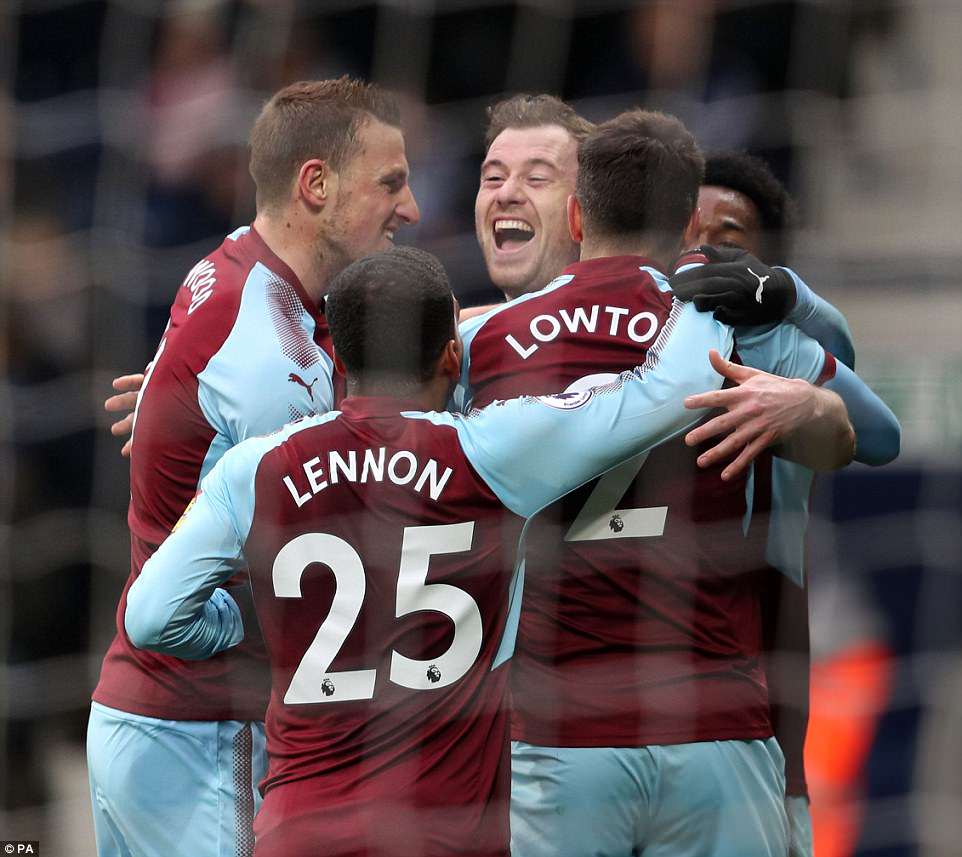 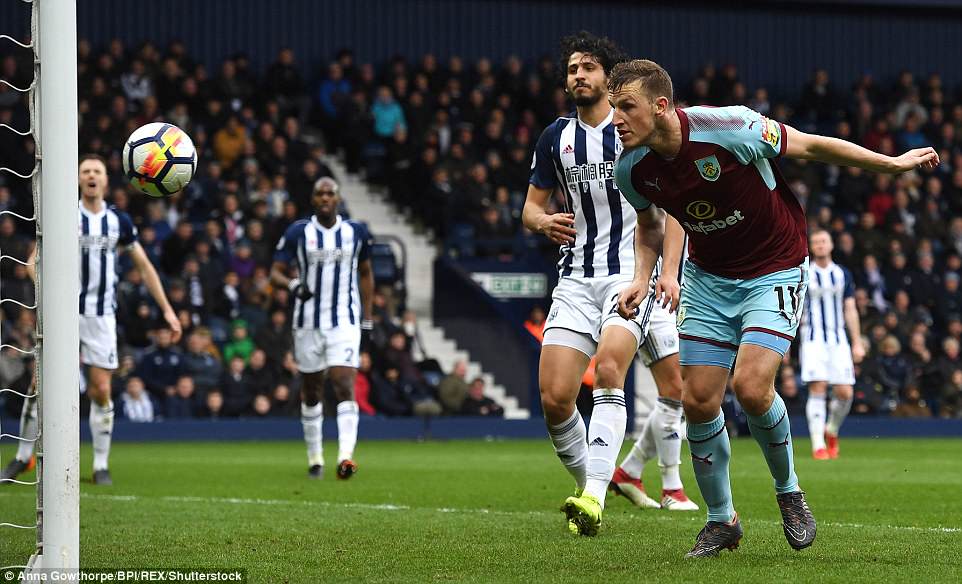 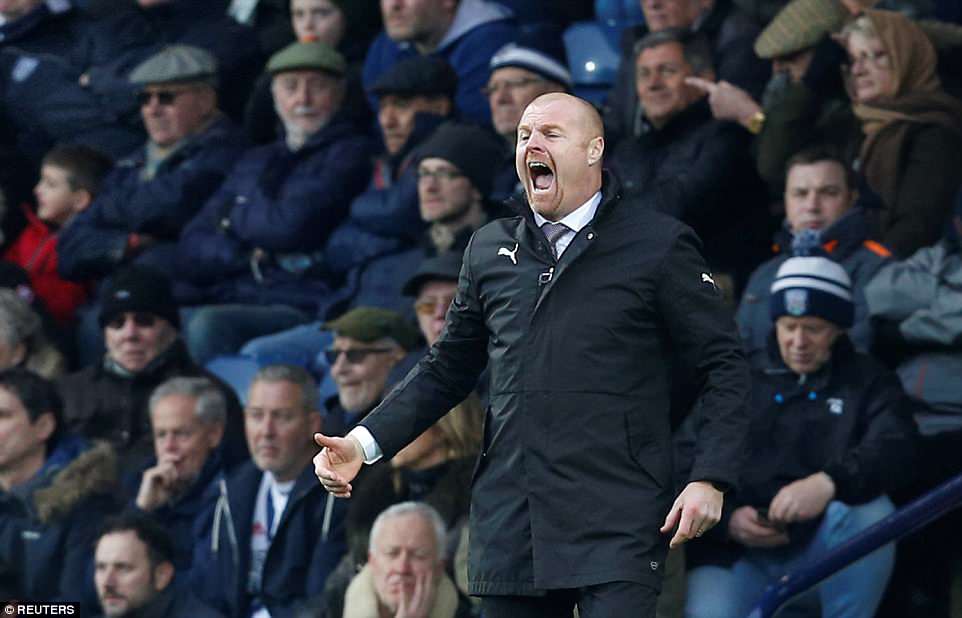 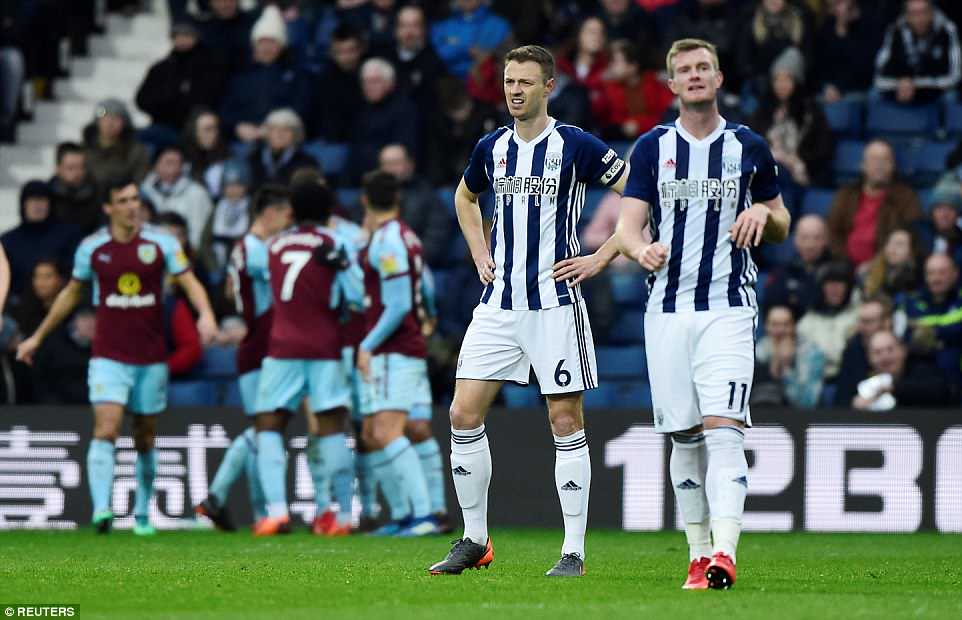 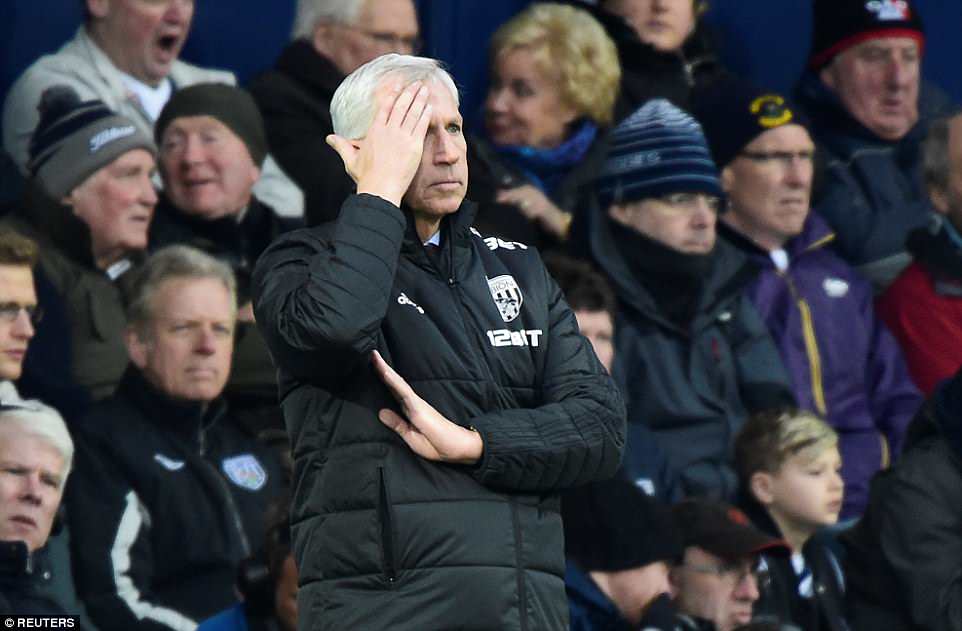 This was an eighth successive loss for West Brom and they are bearing the look of an obliging participant in their own relegation. This result never seemed in doubt from the moment midway through the first half when Ashley Barnes put Burnley in front with a fantastic goal, his fourth in as many games. And when Chris Wood added another, the home fans who did make the trip streamed out.

Salomon Rondon pulled one back to at least provide a modicum of cheer and Chris Brunt nearly found an equaliser but it was all far too late and far too little.

Much of this match was like a training game, with West Brom’s players incapable of finding purpose in their play and Burnley confident on the ball but largely content to contain rather than penetrate.

It meant Dyche’s team were able to record unusually high figures for possession at around 65 per cent and such was West Brom’s listlessness home fans began cheering ironic oles when their side strung a few passes together in their only real move of note in the first half.

By that stage Pardew’s team were trailing to Barnes’s spectacular strike, which had come courtesy in part of the kind of tepid defending that has characterised West Brom’s season.

Kieran Gibbs and Chris Brunt failed to cut out a pass down the right and the ricochet between them presented possession to Aaron Lennon, who took his time to pick out Barnes with a clipped cross. Barnes had to shuffle back slightly to reach the ball and then produced a quite brilliant volley on the turn in midair to propel his shot into the top corner. It was another clean hit following on from his goal against West Ham before the international break. 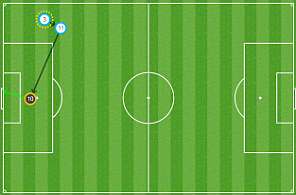 Ashley Barnes gives Burnley the lead with a bicycle kick as he is assisted by Aaron Lennon’s cross from the right wing. 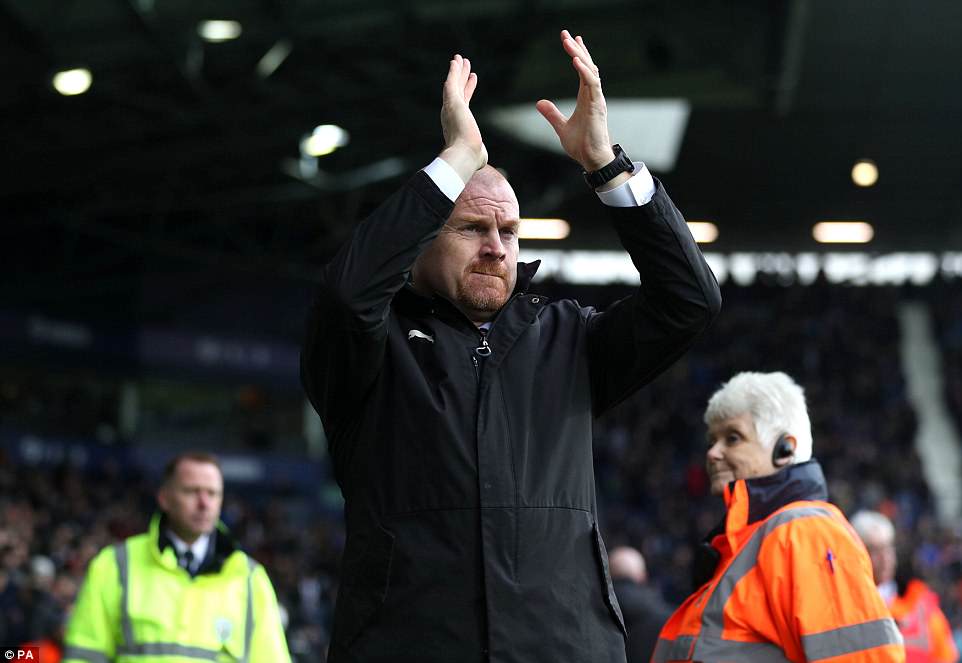 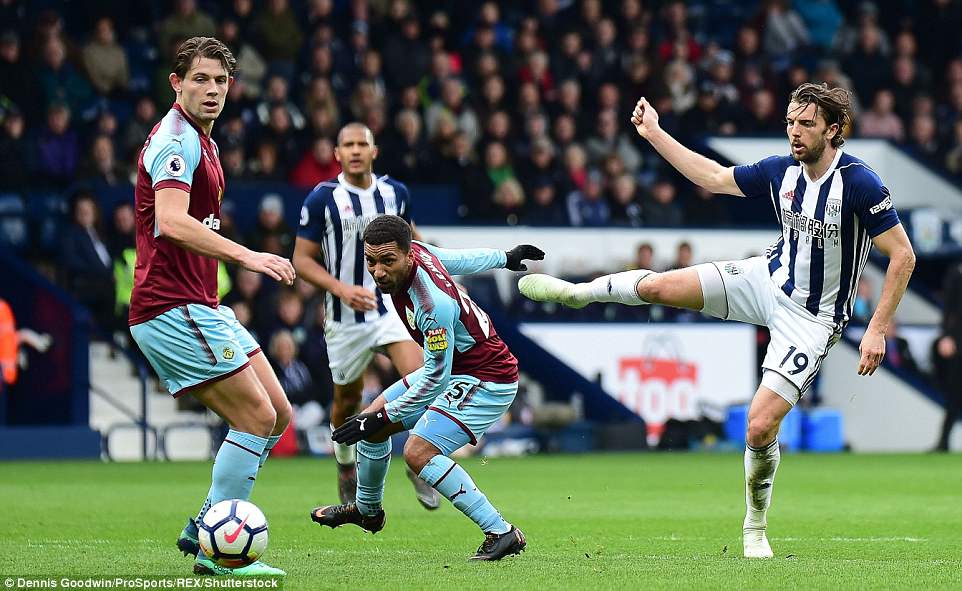 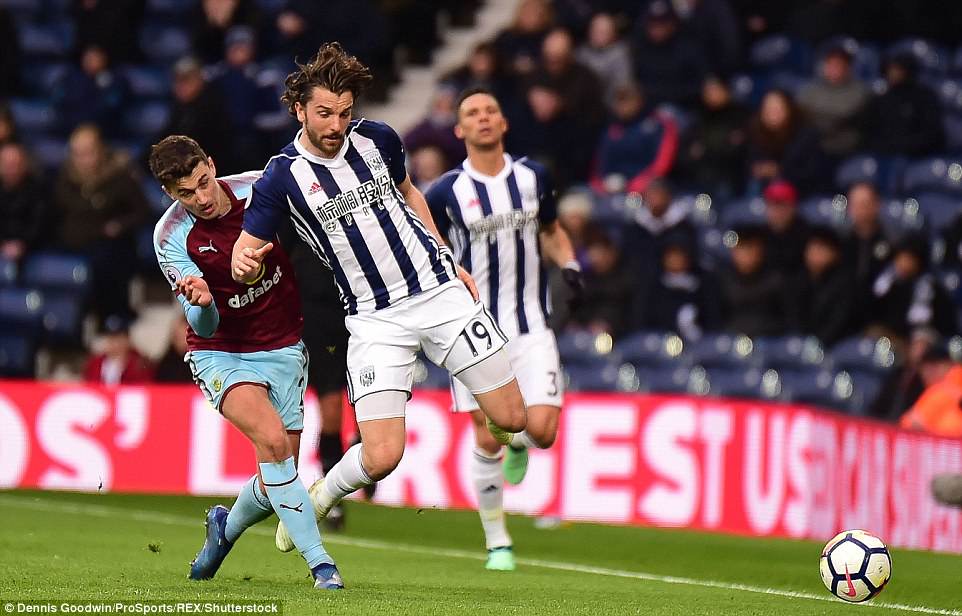 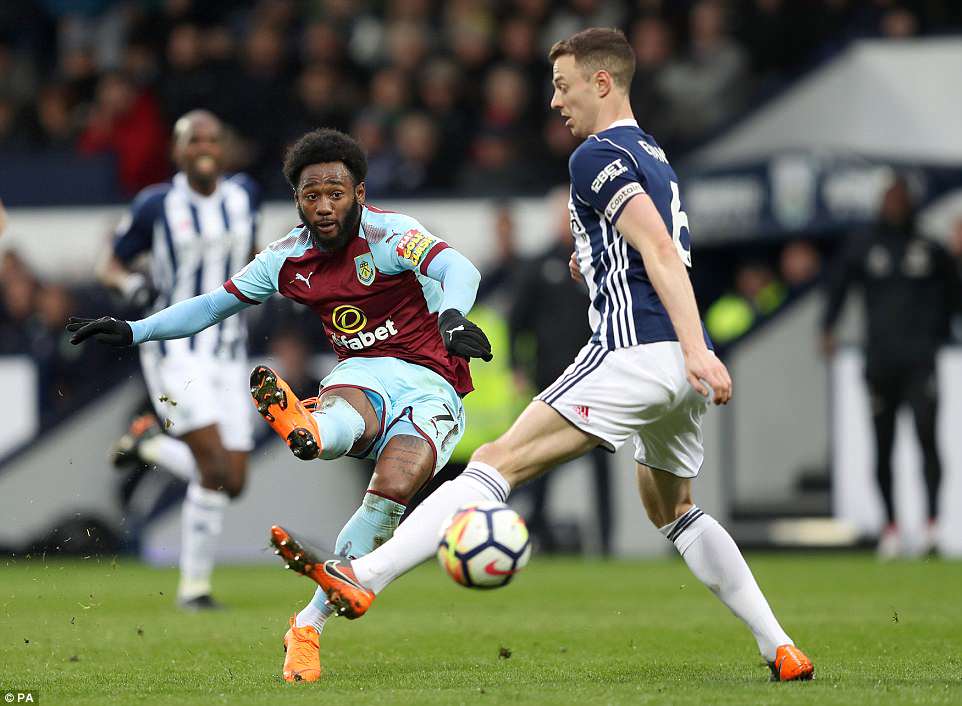 The gallows humour only lasted so long. There were fierce boos when Jonny Evans misplaced a pass to allow Georges-Kevin Nkoudou a chance that he spurned. It was a profligate performance from the winger on his first Burnley start.

Wood then dragged a finish wide from a very good position following a Burnley counter-attack.

Pardew recognised his team were not being served well by the back-three system and changed to 4-4-2 with Allan Nyom pushed up as a right-sided midfielder. And out of nowhere, West Brom nearly equalised when Jake Livermore’s cross found Rondon, who powered a strong header that Nick Pope dived down well to claw out from beside the post.

Pardew sent on Matt Phillips at the break to try to shake some life into his team and they were marginally better. But familiar failings allowed Burnley to double their advantage with 17 minutes to go.

Matt Lowton seized the second ball from Pope’s long clearance and as West Brom’s defence frayed he threaded a pass to Wood, who cut inside Evans to shoot. Ben Foster saved with his chest but the rebound bounced up invitingly and Wood followed up to nod in.

West Brom got on the scoresheet when Evans strode out of defence to cross and Rondon nipped in ahead of James Tarkowski to rifle in a finish. But they remain 10 points off safety and the mathematics will soon add up to relegation. 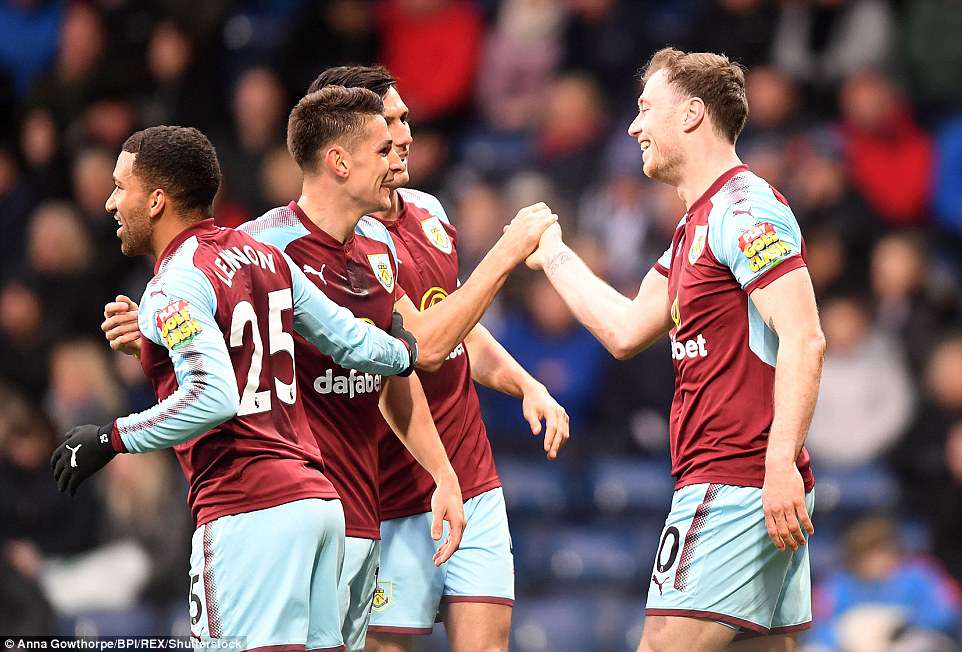 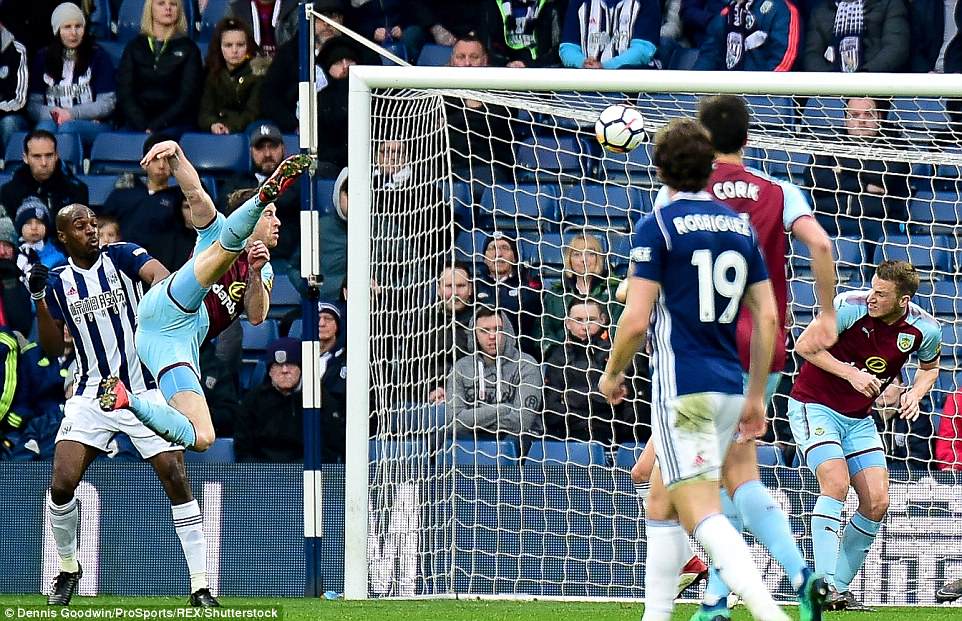 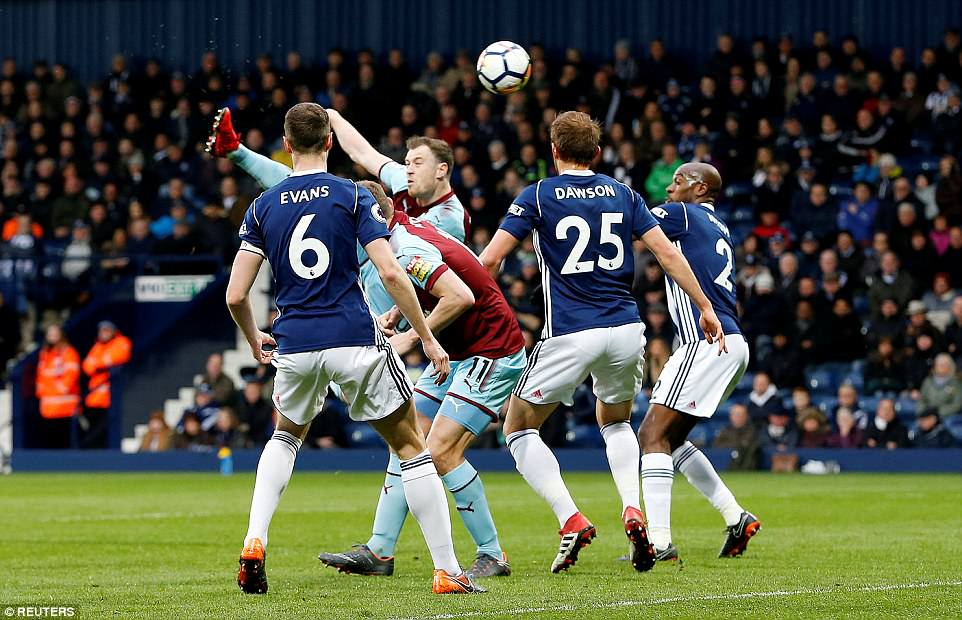 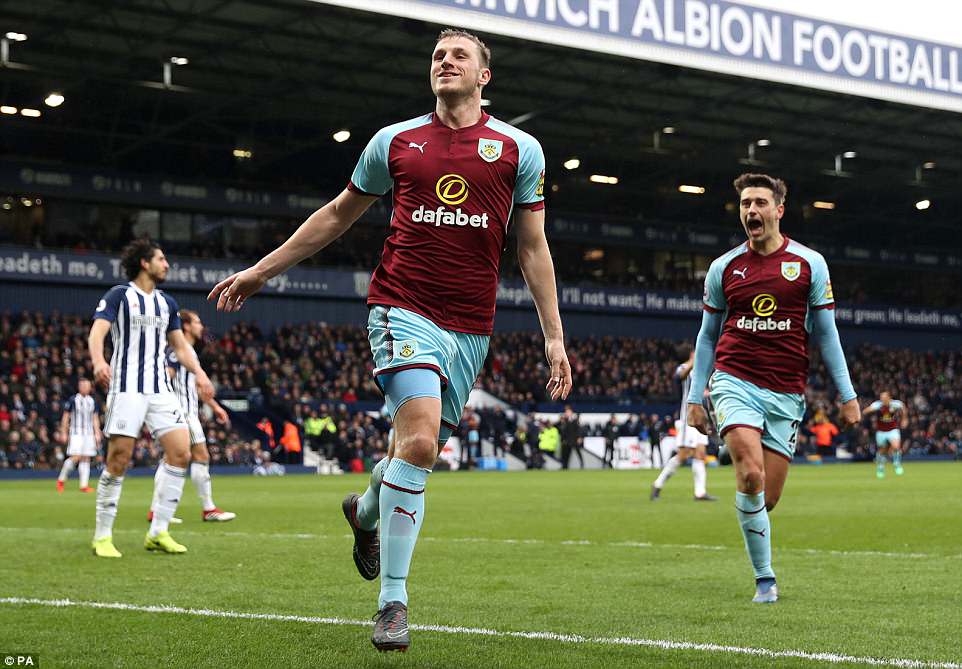 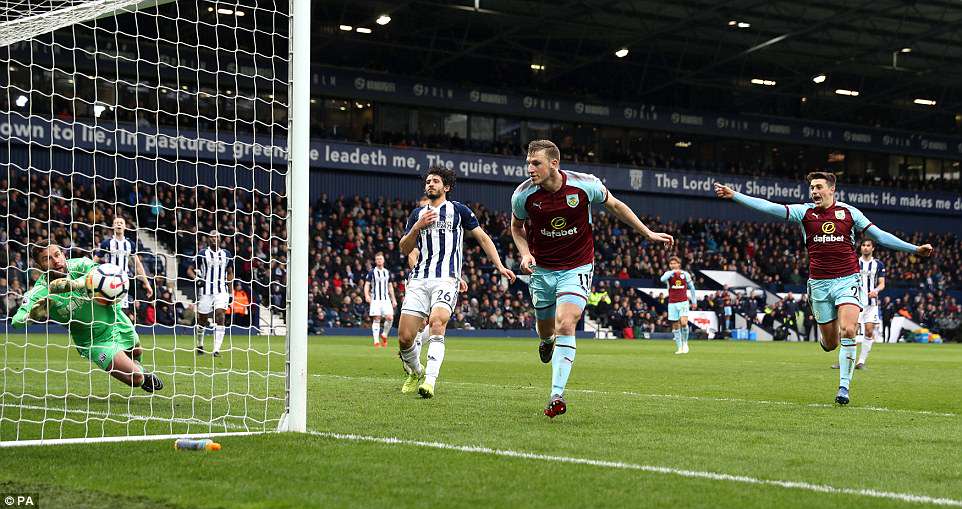 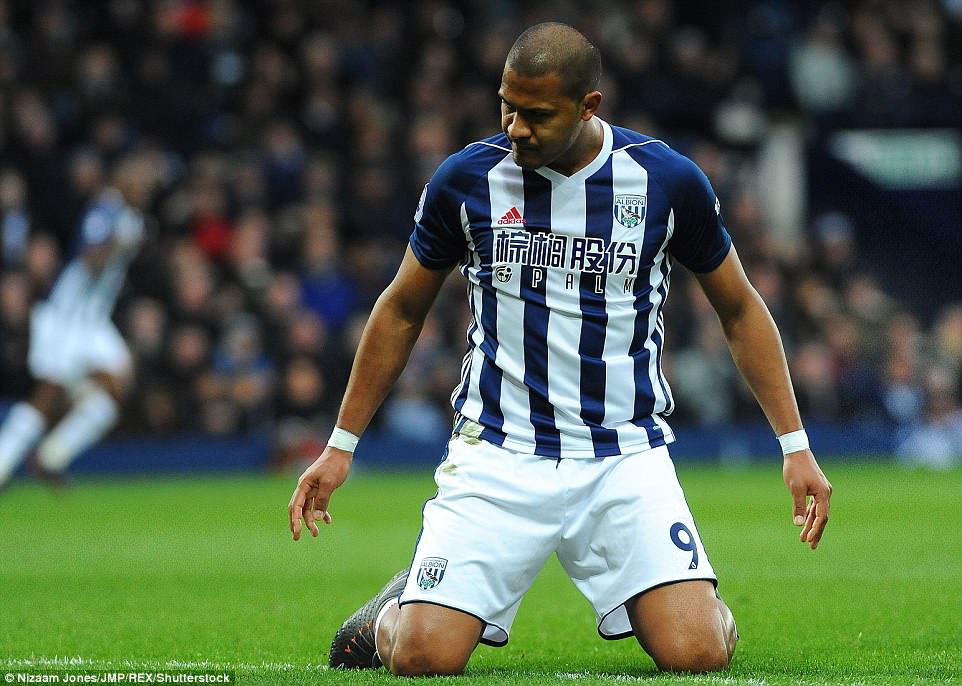 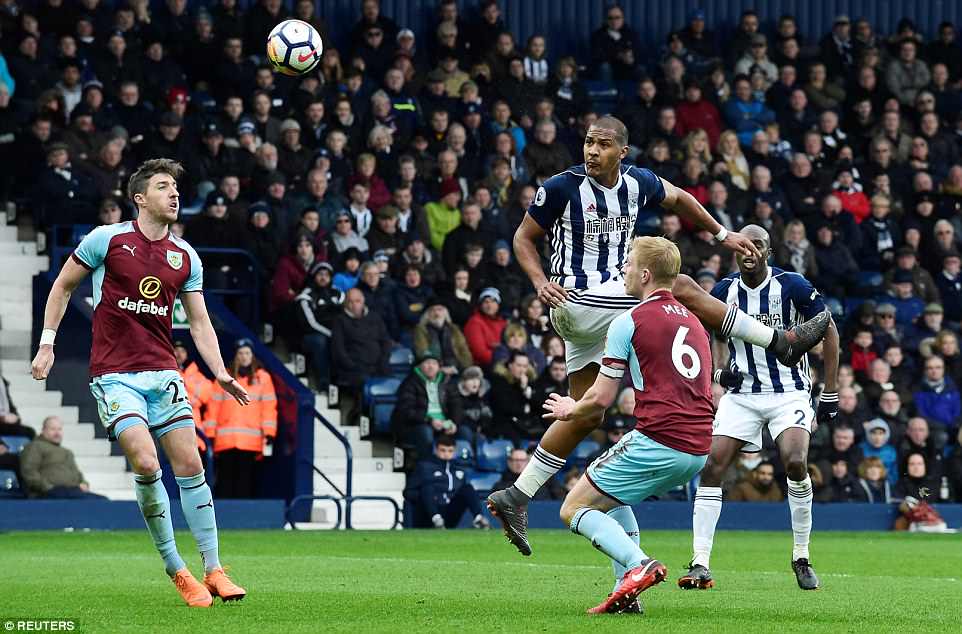 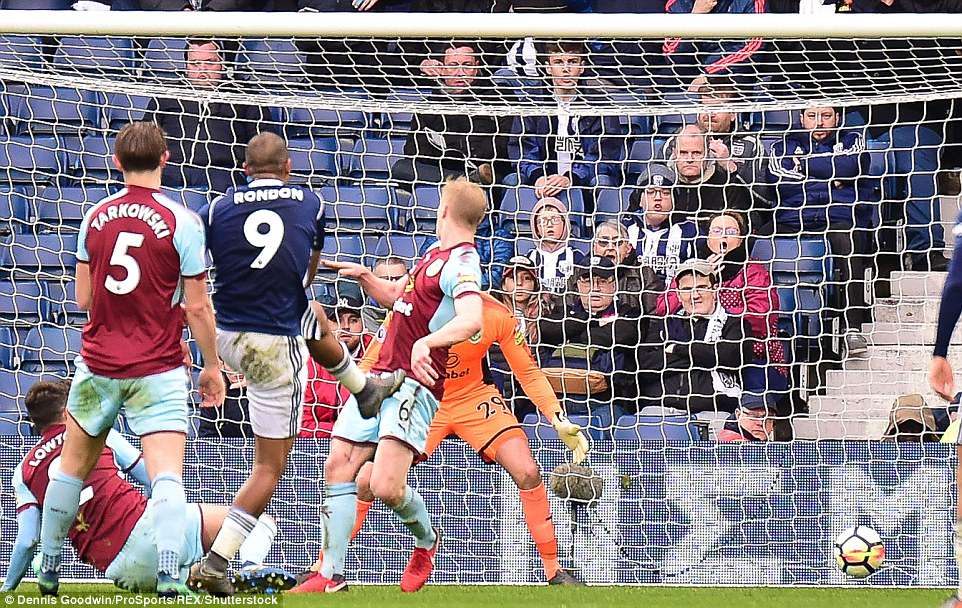 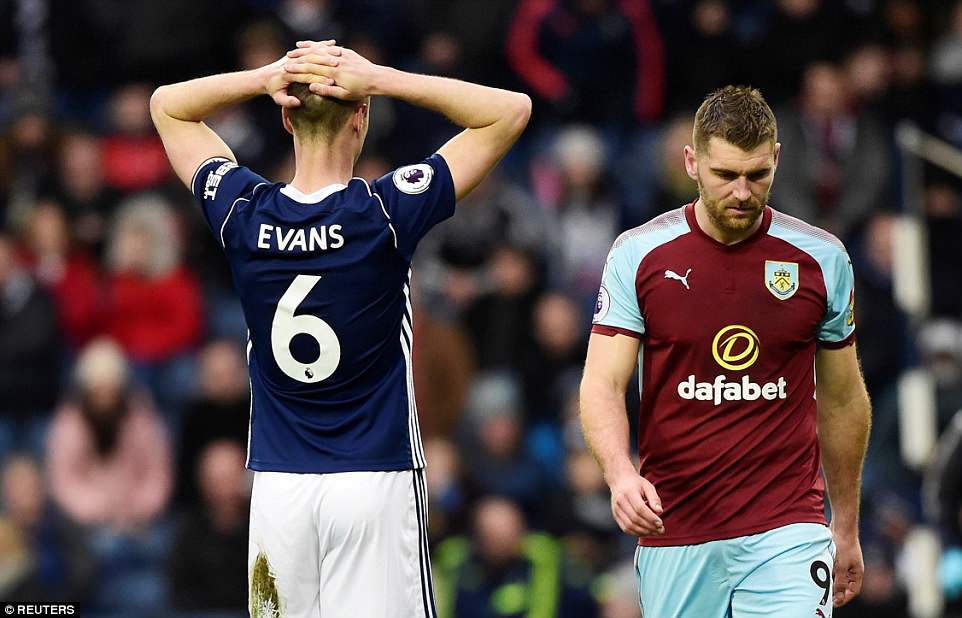