How shocking bridge crash unfolded: Witnesses detail how ‘it was like watching a video game’ as ‘madman’s’ Ford collided with a Vinnies truck – as new footage emerges

Shocked bystanders have recalled the horrifying scenes on a major Melbourne highway after a speeding driver ploughed into a Vinnies truck, sparking traffic chaos and leaving four people injured.

Two men are in hospital – including one fighting for life –  after the sedan and truck collided on the West Gate Bridge near Williamstown Road about 10.35am on Tuesday.

Police said the car’s driver, 21, was in a stable condition while his passenger is critical. Another man in his 20s and a man believed to be in his 50s sustained minor injuries.

Motorists stuck in gridlock traffic after four lanes were closed phoned into radio stations to describe the carnage unfolding before them.

Witnesses reported seeing a silver Ford ‘driving like a madman’ just before the serious crash which left bodies ‘sprawled across the road’. 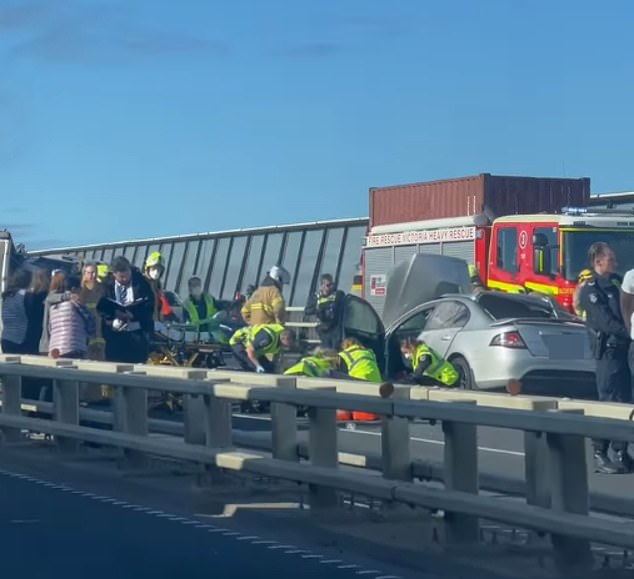 One motorist told 3AW he was travelling outbound when a silver car sped past him ‘like a bullet’.

‘It was like watching a video game,’ the caller, Harry, said.

‘I thought to myself, he won’t make it to the other side of the bridge.’

Harry said the same car was involved in the crash with the Vinnies truck.

Fred said he saw the crash site as he crossed the Westgate heading towards the city.

‘All the lanes are blocked. I don’t think anyone is getting through,’ he said.

‘There is a Ford that looks like it has been t-boned and knocked around. It is actually facing the wrong direction.

‘There are three or four people lying in one of the lanes being attended by drivers who have stopped or were driving in front of them.’ 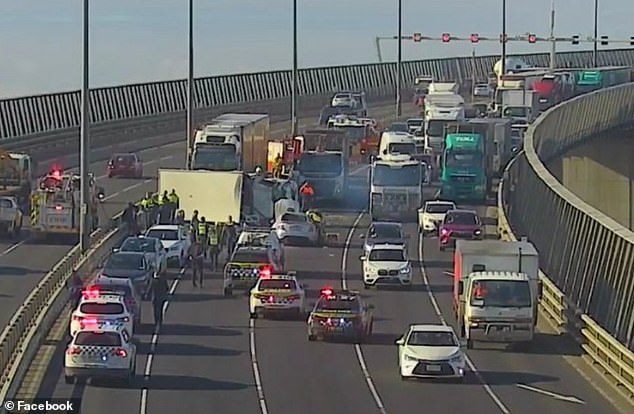 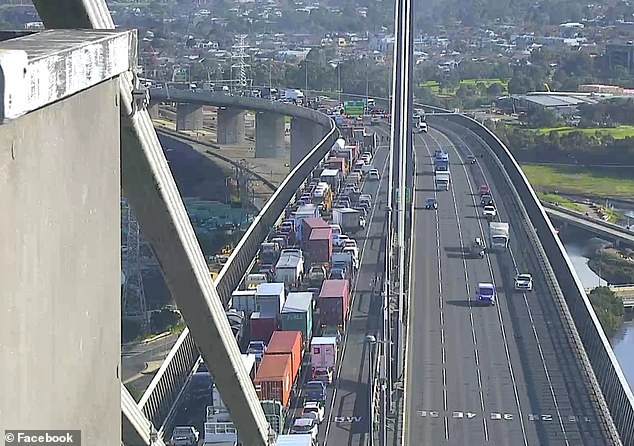 Traffic was banked up for several kilometres in the wake of the crash, above

Fred said members of the public appeared to have rushed to their aid because emergency vehicles were struggling to get to the scene.

‘The ambulance and the police just can’t get through because the roads are entirely blocked,’ he told the program.

One woman who arrived at the scene just moments after the crash told Daily Mail Australia she saw paramedics working on one injured person on the ground.

‘There were about fifty cars from police, ambulance and firefighters,’ she said.

The truck rolled onto its side and is blocking four lanes of traffic outbound from the city’s CBD.

Helicopter footage appeared to show at least three men being taken away in handcuffs after the collision. 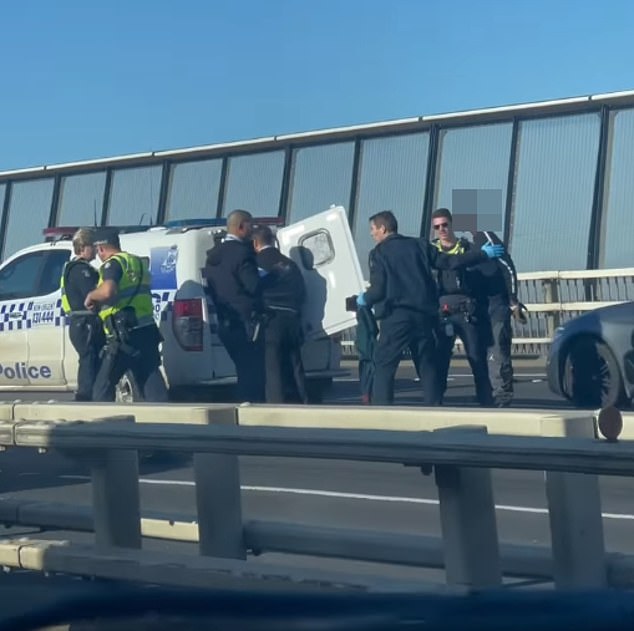 ‘Three other males aged in their 20s who were in the car were arrested at the scene after the vehicle was suspected of being stolen as it was displaying false registration plates,’ Victoria Police said.

‘They have since been released pending further enquiries.’

The three other passengers who were in the car were assessed by paramedics.

The driver and passenger of the truck were uninjured in the accident.

The Department of Transport has advised motorists to avoid the area and use Geelong Road to get to the M80 Ring Road interchange instead of the West Gate Freeway.

Department spokesman Chris Millar said he expected the closures to last for ‘at least a couple of hours’.

‘[The lanes] will only be open once the mess is clear and investigations complete,’ Millar said.

The exact circumstances surrounding the collision are yet to be determined and the investigation remains ongoing.

Police are urging any witnesses or anyone with dashcam footage that may have been in the area at the time of the collision to come forward.