It was a Monday night and Jarrod Bowen and his five friends were the only customers underneath the creaking old beams of the Chequers pub in Leominster.

The West Ham winger and his pals were there for England’s opening game of the World Cup. They watched Gareth Southgate’s side toil away against Tunisia and cheered when Harry Kane scored the stoppage-time winner.

He spent most of his weekends there that summer three years ago. Bowen was home after finishing the season at Hull as top scorer and their player of the season. What better way to enjoy some deserved down-time. 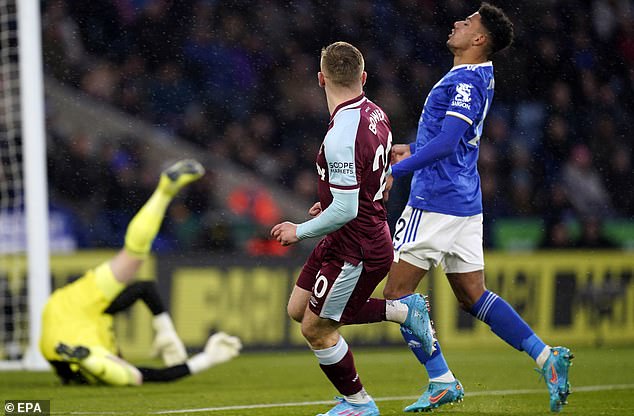 It’s unlikely to be the case when the next World Cup arrives. Bowen could be at the heart of it. He is the stand-out England player of the season. Eight goals and eight assists for West Ham in the Premier League. Only Mo Salah has more combined.

Come November, it could be those same five friends, in the same pub, watching their mate play for England. ‘That’s obviously the dream, isn’t it,’ smiles Bowen. ‘That would be lovely.’

‘I can probably be better than I think I am now, if I’m honest with myself. I think I know how good I can be and I think it’s all starting to come into place. It’s all clicking together. I know how well I can play and I want to get to those levels.’

In what ways? ‘Just my all-round game,’ he adds. ‘There’s plenty more goals I could have scored already this season. I’m probably talking about 15 goals already. They haven’t gone in and I’m hard on myself, saying that’s where I need to improve if I want to go on to another level again.’

He uses Salah as the benchmark. ‘That’s what you base it on – off the very best. And I think Salah is the best in the world. Same position, similar players, both being left-footed, I look at his numbers. That’s why I think I should have had more goals. That takes you up to another level again.’

David Moyes will surely hope he does. At times, it feels as though West Ham’s top-four hopes are being carried by Bowen. It’s a mark of how far both Bowen and the club have come.

Their home clash with Wolves on Sunday is almost two years to the day since Bowen made his first start — and scored first goal — for the club following his £18m move from Hull. 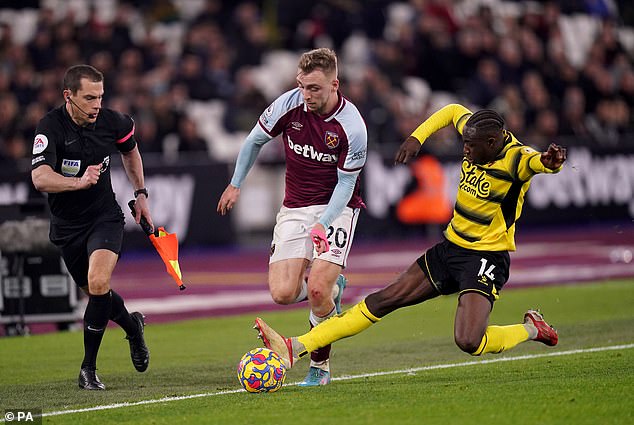 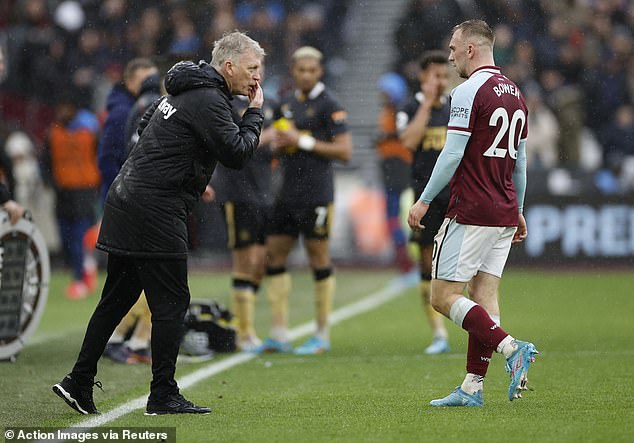 The last time England played in the competition, Bowen was watching the games in the pub

Back then, he joined a team in a relegation scrap. Now, they are a club in European competition pushing for even more.

‘It’s been a bit crazy when you look back,’ says Bowen. ‘I think coming into it I knew this club didn’t deserve to be in a relegation battle. 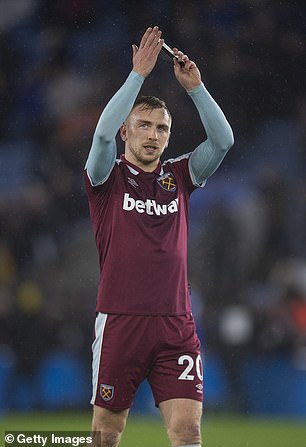 Bowen is a fan favourite at the London Stadium, and his rise from Hull City to now is incredible

‘We had to get out of that. The first season was my first full season in the Premier League. It was more about finding my feet and enjoying my football.

‘We did that and qualified for the Europa League. This season we’re talking about finishing in the Champions League, so it’s been a bit of a crazy two years. But as a player it’s where you want to be. You want to be challenging for the top-four places.’

In truth, his whole career has been crazy. Non-league to Premier League. Coming through at Hereford United, training in the local college up the road, rejected by Aston Villa and Cardiff, nearly giving up, making his senior debut months before his beloved Hereford were kicked out of the league.

Had things been even slightly different, he may have been plying his trade on his uncle’s farm.

‘I probably wouldn’t have said I would play at the top level when I was at Hereford,’ he says.

‘Where I’m from, there have not been any players that have gone on and played in the Premier League, I don’t think. Or not any that spring to my mind. The way of life back home is very country-orientated. 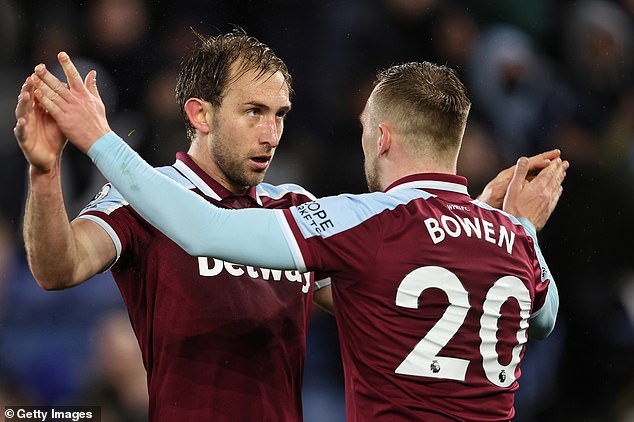 ‘I think moving away at a young age, at 17, and being dedicated to doing what I wanted to do, has helped me get to achieving what I know I could have achieved. Maybe in another life I could have been up all night on the farm.’

There’s no chance of Bowen losing sense of his roots. ‘I think my old man would be straight down the motorway if I ever got ahead of myself,’ he says. Even during the summer, his dad Sam keeps his lad fit by getting him to lumber wheelbarrows full of cement up a hill.

‘Yes, he’s a bit of a mad man,’ says Bowen. ‘He wants to do it old-school. Pitch runs and box-to-box, that’s boring. Let’s do something where it’s hard. I’m nearly in tears at the end of it because it’s that hard.’

And there’s no way he can forget it when he keeps being shown a picture ‘the famous picture’ of his younger self stood on the terraces at Hereford, unrecognisable with blond hair and glasses, looking like the Milkybar Kid, with his arms spread wide cheering on his local team. 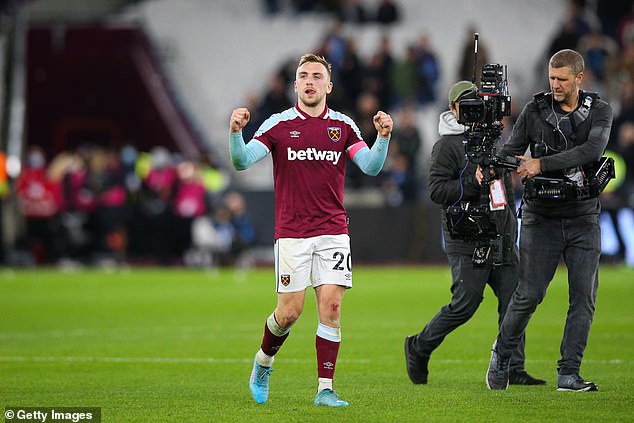 ‘That was just me growing up,’ he smiles. ‘I was watching Hereford most weeks on the sides, giving it large, a bit of a hooligan at 10 years old! But it’s a funny picture. I’ve changed a lot in the last 10 years.’

And his dad, along with his uncle Ben and brother Harry are with him every step of the journey, usually in the form of a 300-mile roundtrip in a minibus from the family home in Herefordshire to the London Stadium. Who knows, in a few months’ time, the destination might be Qatar.

‘The players who are in my positions are world-class players,’ says Bowen. ‘I haven’t got too invested in the England situation because once you get too invested, it is on your mind when you play at the weekend. I have seen things online and I’m aware of social media. 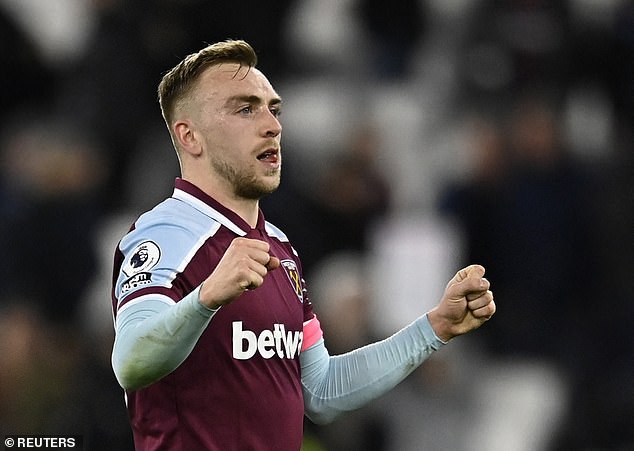 ‘It just goes to show I must be doing something right and this season was about getting to the levels I know I can get to.

‘If it happens, obviously it’s every boy’s dream to play for his country and certainly it’s my dream. If it happens I will be delighted but if it doesn’t it’s not the end of the world.

‘It’s up to me then to keep improving and put my case forward.’