The leap and punch of the air, complete with the roar that accompanied it, would not have been out of place at Arsenal last night never mind the supposedly more sedate environment of this second Test.

For Joe Root it was the equivalent of hitting the winner at Wembley.

How the thousands of England supporters who have flocked to this cricketing cathedral in even greater numbers than usual rose to the England captain and how important his 25th Test century was in a series he cannot afford to lose. 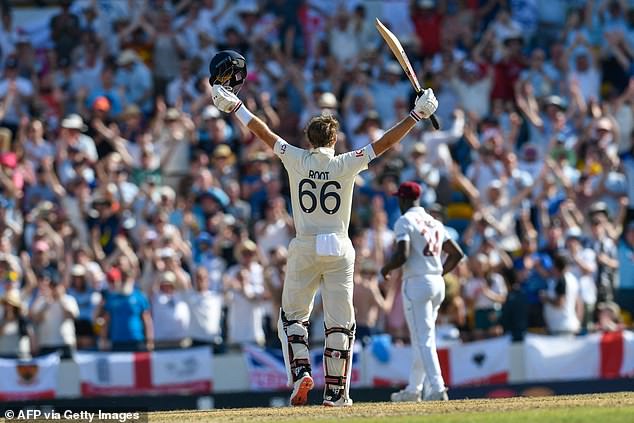 Root had just reached three figures yet again and showed how much a hundred at the fabled Kensington Oval in front of what amounts to a home crowd meant to him.

It was a particularly special moment in a career full of them, made all the more joyful by the presence of the first big post-pandemic travelling crowd at an England Test.

Just as important, too, was the most fluent innings of this first day that belonged not to the captain but one of the generation England hope can help create a new culture here.

Dan Lawrence has been given the chance in this series to prove his flamboyant and unorthodox stroke-play really does belong at this level and how he flourished here in Root’s old position of four alongside his captain in a stand of 164. 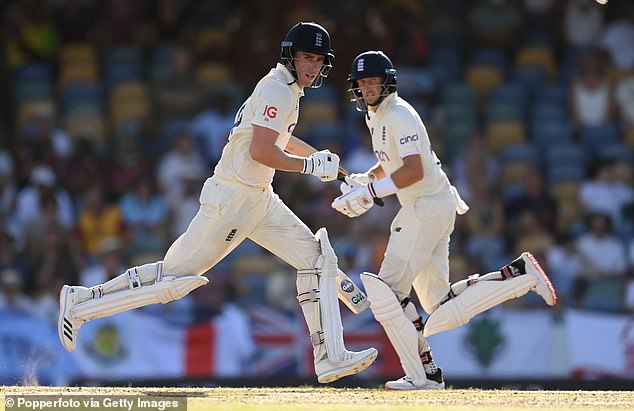 Only when Lawrence got carried away and, after hitting Jason Holder for successive boundaries, was caught, cruelly, at cover nine runs short of his maiden Test century off what became the last ball of the day did he falter.

This was a day when Root received contrasting support as he built the platform that will surely see England go on to a rare formidable score on another desperately docile pitch.

First came the tortoise in Alex Lees in a painfully slow start but he was quickly followed by the hare in Lawrence to build on the second innings cameo in pursuit of quick runs in Antigua that may just prove the spark his Test career needed. 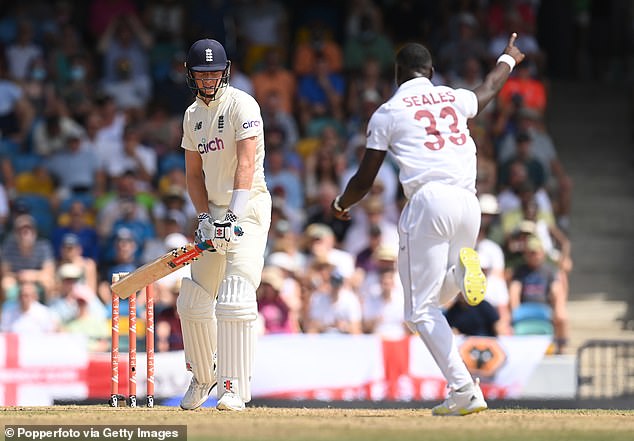 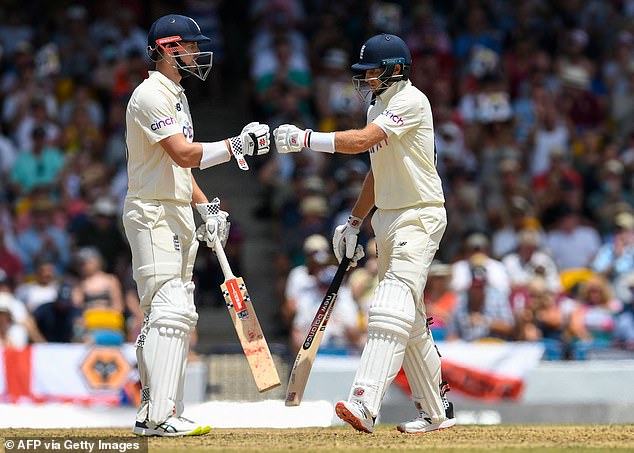 It ended with England on 244 for three, Root unbeaten on 119 and in a position to give an attack including two debutants, Matt Fisher joining Saqib Mahmood when Craig Overton fell ill overnight, a chance to put pressure on West Indies.

If this really is the Test series that will decide Root’s future as England captain then he could not have made a better start.

Root had so many questions to answer after becoming the last man standing among the decision-makers who made such a mess of England’s Ashes challenge.

He started answering them in the first Test with yet another century and, significantly, more purposeful captaincy that included an enterprising declaration and a desire to try to force victory until the bitter end that ruffled a few West Indian feathers.

Now came his eighth three figure score since he launched 2021 with a double century at an empty Galle as Root went past 2,000 runs since the start of last year by doing what he has always done as captain, lead by his own excellent batting example.

It was not quite unblemished. Root was found by replays to have got an inside edge onto pad off Jason Holder that just about carried to Josh da Silva but Test debutant umpire Nigel Duguid did not detect it and West Indies failed to review.

Then on 34 Root was dropped down the leg-side low by Da Silva off Kemar Roach, who dropped to his knees in frustration knowing how costly that would become. 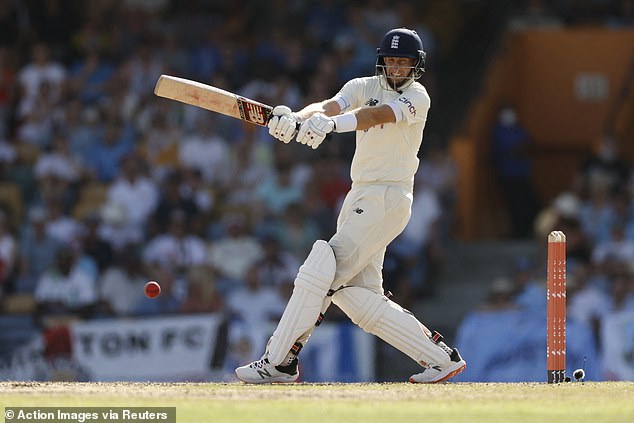 Root (pictured) was dropped down the leg-side low when he was on 34, but was mainly untroubled

There was a revealing graphic on BT that showed Root has a better average, 67.27, than any other Englishman against spin since 2000 and with the possible exception of Graham Gooch he must surely be England’s greatest ever player against slow bowling.

Root manoeuvres the ball against spinners in the way another master of the art in Graham Thorpe did it but he also has a slog sweep against spin that is the equal to anything Gooch produced, even when he swept England to the World Cup final in 1987.

Just as impressive was Lawrence. He has made three other half centuries in his nine Tests before now but did not play a Test in the Ashes and there was a sense he had to deliver in the Caribbean or risk drifting back to Essex as an unfulfilled talent.

Lawrence arrived with England in something of a rut after the early departure of Zak Crawley and a crawl to 30 off 138 balls by Lees, England managing just 47 runs off 30 overs in the morning session.

Patience must be shown in Lees. England desperately need a strong opening partnership and he has at least shown he can be solid and orthodox, as well as reacting to the problems Roach gave him in Antigua by opening up his stance slightly here and dealing much better against a bowler with a formidable record against left-handers.

But all that hard work counted for little when he was trapped lbw for the third time in his first three innings, this time in a different way by Permaul.

The slightly leaden footed Lees clearly has much to do before he convinces just yet.

In contrast Lawrence passed 30 off his 44th ball with a late cut for four off Permaul and showed his full array of shots, including a flicked six off the limited slow left-armer.

How frustrating it was when Lawrence gave it away with just two balls left of the scheduled day, dropping to the floor in disbelief at what he had done.

West Indies had seemed bereft of ideas by then, resorting to a constant diet of short bowling on a pitch that just did not respond.

Advantage still with England but they simply have to go on beyond 400 and ideally 500 before they can be satisfied with their batting work.