Western Australia has recorded zero new coronavirus cases for the third day in a row as Perth and other parts of the state remain in a brutal lockdown.

A Perth quarantine hotel security guard contracted the highly-contagious UK strain of the virus, which sparked a five-day lockdown of the city and the state’s Peel and south-west regions until at least Friday.

The infected hotel security guard, aged in his 20s, worked two 12-hour shifts at the Sheraton Four Points hotel on both January 26 and 27 while there were four cases at the hotel, including two with the highly-infectious UK variant and one confirmed to have the South African strain.

Premier Mark McGowan said that if the streak of zero cases continue until the end of the week the lockdown will be lifted from Friday as planned – but restrictions could stay for up to two weeks.

‘I want to get back to normal as quickly as possible. But we need to see at least 14 days of no community transmission before we can return to our unique life here in Perth, and WA, south-western Peel, that we were all enjoying throughout January,’ he said on Wednesday.

In total 189 close contacts of the positive case have been identified with 138 returning negative test results.

‘In addition, 234 casual contacts have also been identified – 116 of these have returned negative results,’ Mr McGowan said.

The premier also lashed out at those who had suggested medical staff were running low on PPE gear.

‘This is completely untrue. Throughout this pandemic, we had prepared and have all necessary PPE in stock. Misinformation and fear mongering being peddled by some people needs to stop,’ he said.

‘This person, there is no evidence at all that he did anything apart from what was advised in the protocols,’ he said.

Authorities also confirmed the guard had been sitting in a corridor outside an area which was close to the room of an infected returned traveller.

He was not wearing a mask which was permitted under the public health advice of the time. This has since changed.

Dr Armstrong said health officials are yet to understand how the man became infected but one possible reason could have been the guard touching a surface that had been contaminated.

Another possible reason, which Dr Armstrong labelled a ‘chance event’ was that the air flow from the infected person’s room may have gone into the corridor when the door was opened.

The infected person’s door was opened seven times during one day while nurses in PPE gear dropped off medication but the security guard was never inside the room.

Authorities continue to work how the guard became infected. 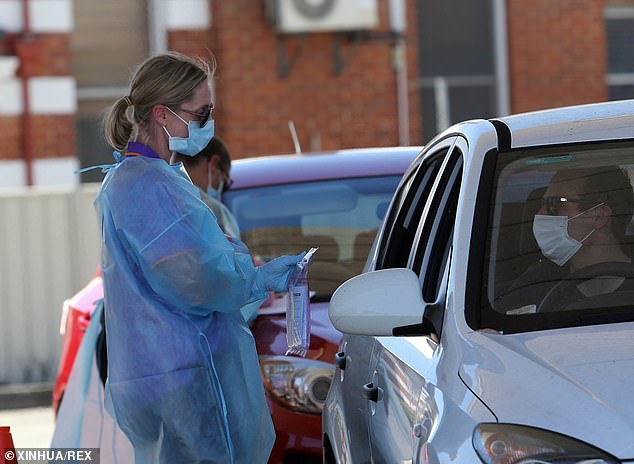