Trump administration officials are keeping their lips sealed on whether they believe there are connections between the two Category 4 hurricanes that came barreling at the United States in recent weeks – Harvey and Irma – and climate change.

When Press Secretary Sarah Huckabee Sanders was asked about a link Monday she touted the country’s environmental record and moved on.

When Homeland Security Advisor Tom Bossert was asked, as he preceded Huckabee Sanders in the briefing, he wouldn’t talk about climate change’s cause.

‘I will tell you that we continue to take seriously the climate change,’ he said. ‘Not the cause of it, but the things that we observe.’

‘Causality is something outside my ability to analyze right now,’ Bossert also added.

When President Trump was asked about it Sunday, returning home to the White House from Camp David, he simply ignored the reporter’s query and walked inside.

Climate scientists largely agree that the oceans are heating up, leading to larger, scarier hurricanes. 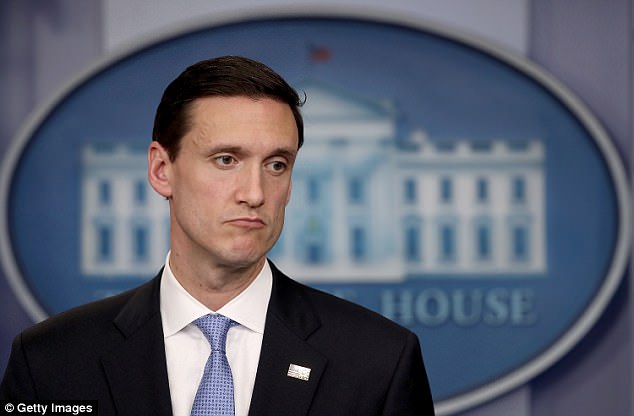 President Trump’s Homeland Security Advisor Tom Bossert said on climate change that, ‘Causality is something outside by ability to analyze right now’

At Monday’s briefing, Huckabee Sanders dismissed a climate change question, noting that Trump had addressed the issue previously of whether he thought it was man-made.

In the past Trump has suggested climate change was a hoax created by the Chinese to choke American industry.

In June he pulled the United States out of the Paris climate accord.

Huckabee Sanders was also asked if Trump was re-thinking that decision now.

‘I’m not sure, specifically, on the Paris climate deal, but as he said at the time the goal is to always do the very best when taking care of the environment and taking proper steps,’ Huckabee Sanders replied.

‘The United States is one of the best in the world at doing this, we want to continue to do that, but right now the administration is focused on the recovery and the relief efforts and as Tom [Bossert] said a few minutes ago we’ll look at that analysis once we get through the coming days and focus on the recovery and relief and saving-life effort,’ Huckabee Sanders added.

Bossert had suggested that the hurricanes be studied, though also pointed out the cyclical nature of the seasons.

‘And I think the scientists for the forecast on this particular one, they were dead on that this would be a stronger, more powerful hurricane season with slightly more than average large storms making landfall in the United States,’ he said.

‘So we’ll have to do a larger trend analysis at a later date,’ Bossert added.

Of course the scientific community, as the New York Times put it, believes that ‘drawing links between warming global temperatures and the ferocity of hurricanes is about as controversial as talking about geology after an earthquake.’

But in politics it’s become a heated issue that speaks to the current red-versus-blue divide.

On Sunday, Sen. John McCain, R-Fla., who has preached bipartisanship in recent months on the heels of his cancer diagnosis, told CNN’s Jake Tapper that he didn’t know why his Republican colleagues were denying climate change, adding that it was ‘time to sit down.’

‘We have to understand that the climate may be changing and we can take common sense measures which will not harm the American people,’ McCain argued.