What a hoot! Can YOU spot the camouflaged Great Gray Owl hiding in plain sight in this tree?

A nature photographer captured this remarkable image of a Great Gray Owl playing hide and seek with its prey in the forests in British Columbia, perfectly demonstrating the cunning design of nature’s best predators.

Despite being one the tallest owls in North America, the Great Gray snapped here almost manages to completely conceal itself while sitting in plain sight as its feathers blend perfectly into the tree bark behind it.

The only thing that gave away the owl’s presence to the wildlife enthusiast was the bird’s piercing yellow eyes as it turned its head around.

Alan Murphy, 59, is a wildlife photographer from Houston, Texas, who snapped the incredible pictures while taking a photography workshop in British Columbia in July 2019.

Can you spot the Great Gray Owl snapped here in a forest in British Columbia, Canada, in July 2019 by Alan Murphy? 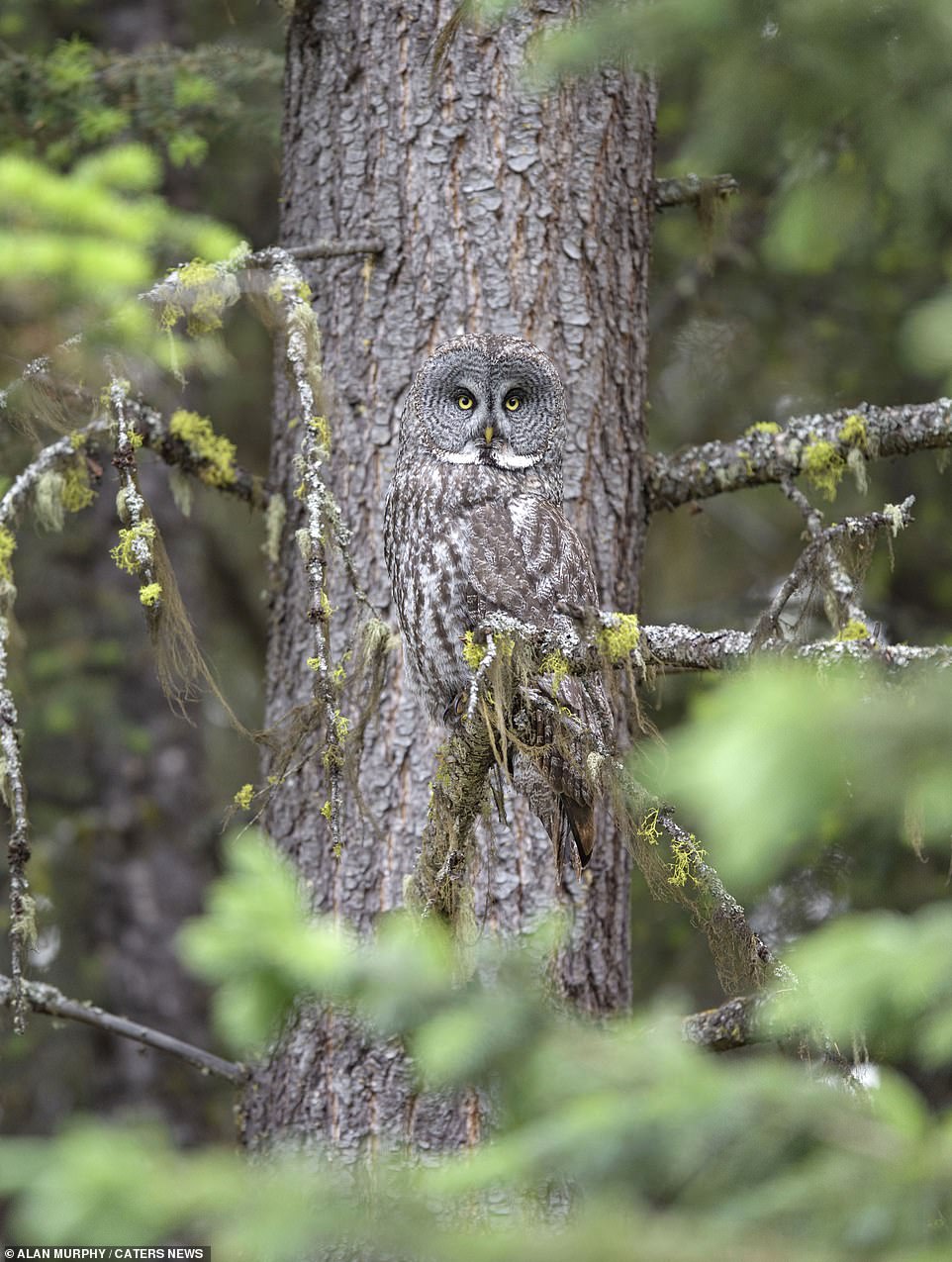 ‘While searching the forests of British Columbia for birds to photograph, I came across this guy,’ Murphy wrote in a Facebook post.

‘It’s like finding a needle in a haystack. See if you can see the Great Gray Owl. Nature is amazing!!’

‘You can see how the plumage of the owl blends right into the texture of the tree bark making it almost invisible,’ Murphy said.

‘The owl is looking away so you can’t see the face rendering the bird invisible.

‘Even though I was focused on the bird, it was still hard to see it.

‘The one image showing the owls face gives his position away a little.

‘I am in awe of the wonders of nature and this is a great example of how wonderful it is to get to see such clever camouflage used by a bird,’ he added.

‘I am truly a blessed man to be able to experience this and be able to do it for a living.’ 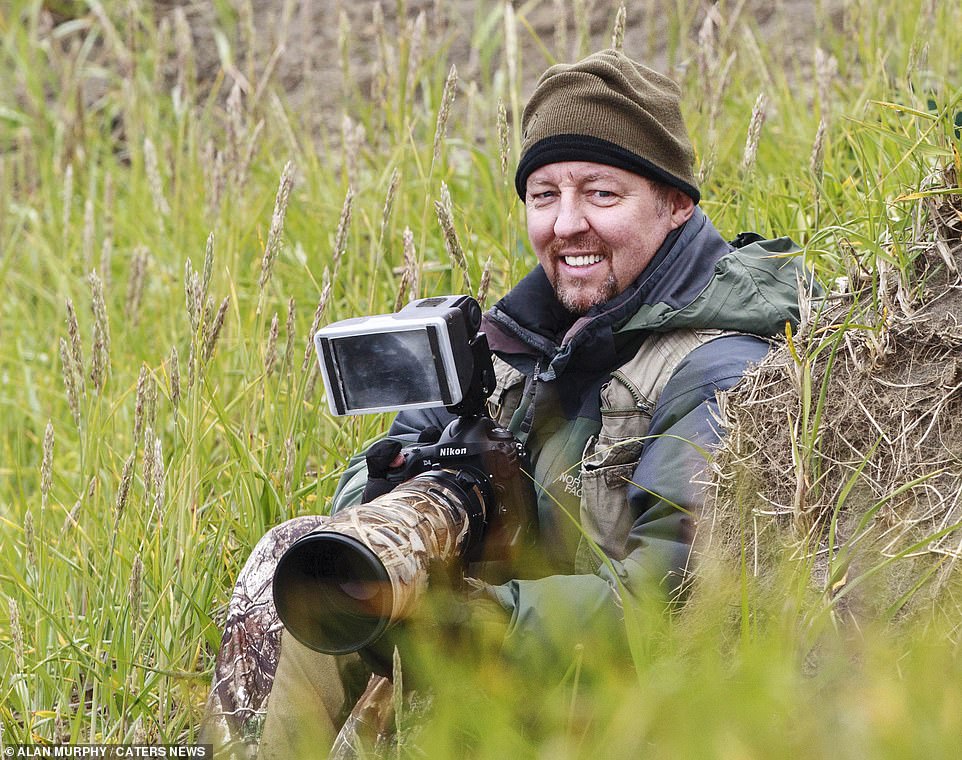 Photographer Alan Murphy, who grew up in Ireland and England before moving to the United States in 1984, first became interested in bird watching  and photography aged five when his parents bought him a pair of binoculars and a bird field map 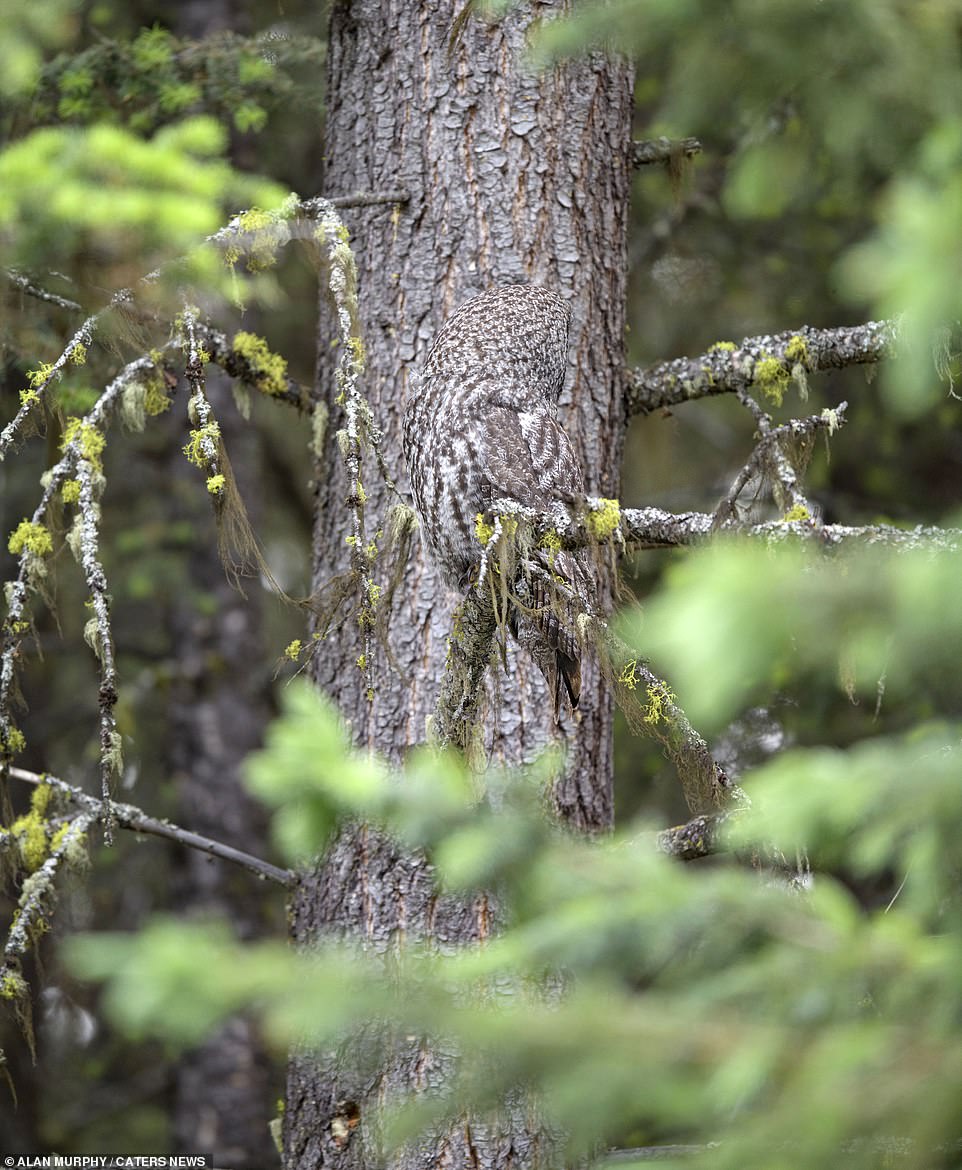 The Great Gray Owl, pictured here, is one of the tallest owls in North America but is surprisingly light because it has less claws

The Great Gray Owl may be one of the tallest owls in North America but that doesn’t mean it is ever easy to spot as its feathers are perfectly colored to blend in with the trees in its forest habitat.

Maybe that’s why this particular breed can be identified because of a surprised look on its face as it’s never expecting to be caught out.

When you do catch it, the Great Gray will be dressed up for the occasion as they can also be identified by an arrangement of feathers that looks just like a bow tie across its neck.

While one of the tallest breeds, the Great Gray Owl is surprisingly light and weighs less than the Great Horned Owl and the Snowy Owl which both have bigger claws and talons.

Its complex and deceptive camouflage is also designed to help it sneak up on its prey, allowing it to attack before the unsuspecting creature even knows the owl has it in its sights.

‘The way they hunt is that they find perches and they stand quietly in one spot. They have really good eyesight, but that doesn’t necessarily do the entire trick in order to catch their prey,’ avian biologist William Blake told FiveMinutesSpare.com.

‘They have evolved to be extremely well camouflaged in order to have a better time foraging on mammals.

‘Once they see one, the goal is for them to approach them in a very silent manner and their camouflage helps them to not be seen by the prey they’re about to pounce on.’

In the spring and summer months when the weather is warmer, the owls will hunt from low posts closer to the ground to watch for mice and vole but return to higher perches in the winter months because of the heavy snow. 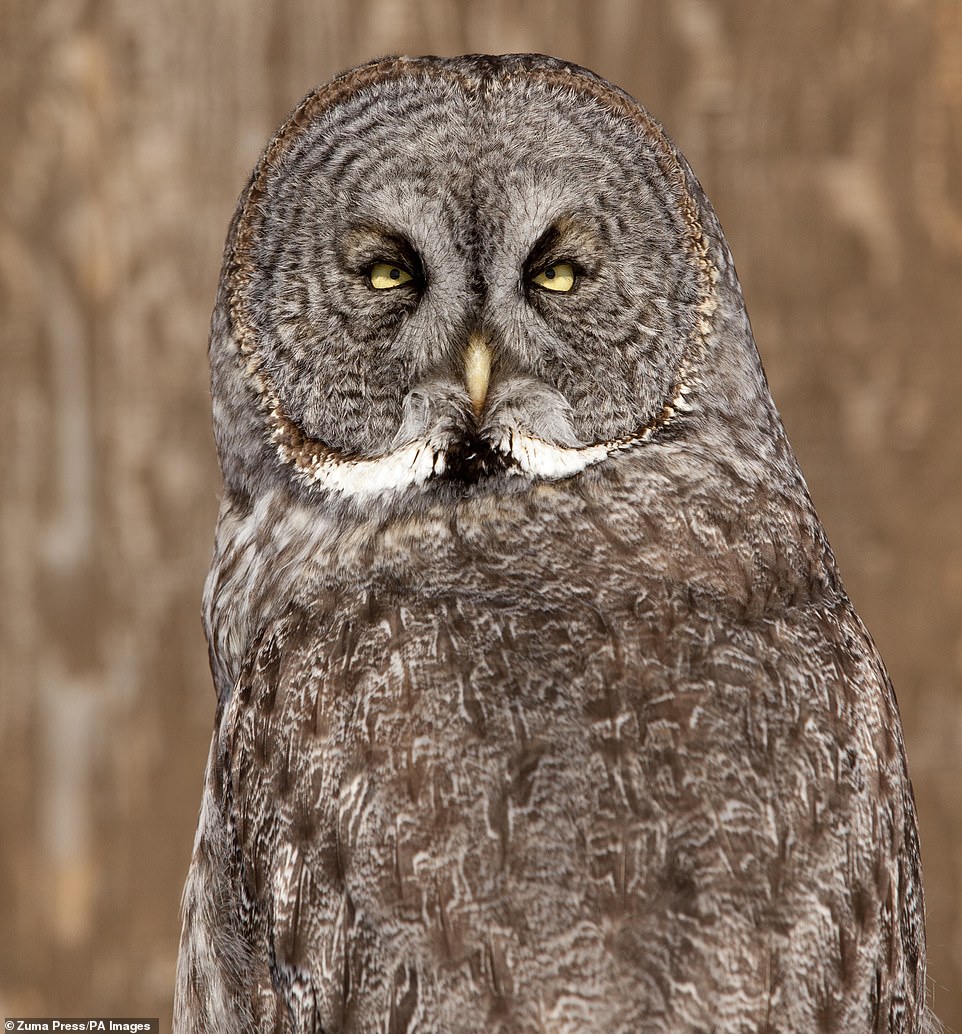 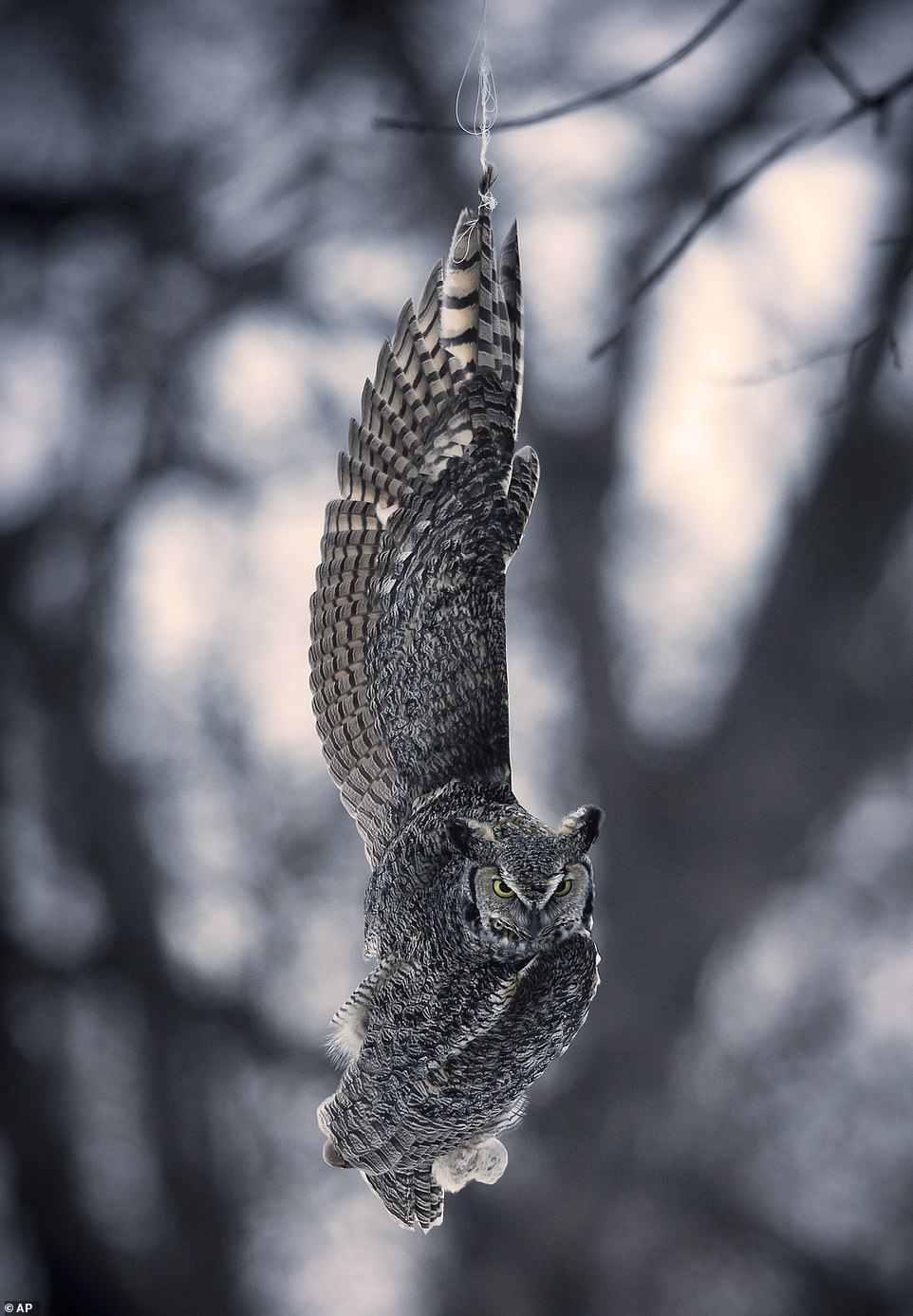 A Great Horned Owl, pictured here hanging from a kite string in North Dakota, is shorter than the Great Gray but heavier 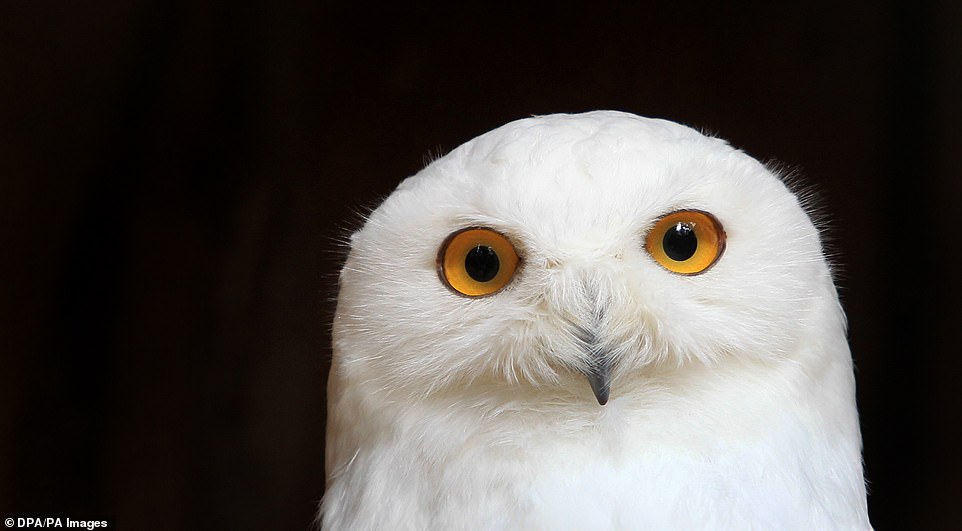 The Snowy Owl, pictured here a leisure park in Germany, has more claws and talons than the Great Gray making it heavier

Murphy explained that the owls ‘have large facial discs that focus sound. Their ears are asymmetrical (one higher than another) which they can triangulate the sound to pinpoint their prey, even under two feet of snow.

‘When the owls head is bobbing and swaying from side to side, they are triangulating the sound in front of them. Once the movement is located under the snow, they will dive down their own body length into the snow to catch the prey.’

Photographer Murphy, who grew up in England and Ireland but moved to the United States in 1984, became interested in bird watching after his parents bought him a pair of binoculars and a bird field guide when he was five.

‘I love the challenge of getting close to birds, the creative aspect of designing the image and the technical challenge of the camera settings,’ he told photography site Kruger-2-Kalahari.

‘There are always more birds to shoot than I have time for, and there are always better images to be made than the ones I have, so bird photography will be my passion for the rest of my life.

‘This means you should know your subjects’ habits, calls and songs, know how to identify the species in front of you, know what species can be found in a certain habitat and how to get close to them. These aspects are far more important than having a camera with lots of bells and whistles.’

Murphy travels around North America changing location from season to season to watch different birds but always returns to Canada in the winter months to capture the Great Gray.

In British Columbia, where Murphy took his photographs, the Great Gray Owl population is currently stable. The bird requires a healthy coniferous and mixed forest with trees large enough to house the tall bird’s nest in order to thrive.

In fact, the Great Gray Owl population is growing worldwide with thanks to conservation efforts.