Unless you’re a multimillionaire, there’s a good chance you’ll never see the ‘magnificent desolation’ of the moon.

But luckily for you, NASA have made a reconstruction of the view from Buzz Aldrin’s window as the Apollo 11 Lunar Module made its historic landing 50 years ago.

The original footage, taken from the right hand side window, is from a 16mm time-lapse at just six frames per second, leading to a rather jerky picture.

Now a team have stitched together newer, higher quality photos of the moon based on landmark navigation and altitude call outs from a voice recording as they landed.

HOW DID NASA RECONSTRUCT THE VIEW FROM BUZZ ALDRIN’S WINDOW?

As the Lunar Module Eagle landed on the moon, footage from Buzz Aldrin’s window was broadcast down to Earth.

At the same time, the astronauts orally kept the ground team up to date on their altitude and location.

By syncing the two recordings up, NASA were able to work out exactly where the originally footage was taken, and take new photos in the same spot.

These high quality photos were taken by the Lunar Reconnaissance Orbiter Camera (LROC) – a spacecraft with three black and white cameras that was launched in 2009.

The LROC team then synced the new photos with the old to create a reconstruction of the video.

These pictures came from the Lunar Reconnaissance Orbiter Camera – a spacecraft with three black and white cameras on it that was launched in 2009.

Since then, it has been orbiting the moon at a distance of between 30-125 miles (50-200km), takings snaps on two narrow angle and one wide angle cameras.

The video shows three minutes of the descent to the surface of Earth’s satellite.

It recreates the Eagle flying over several craters, including the Little West, before successfully landing.

NASA have placed the video side-by-side with the real video footage recorded on that momentous occasion for comparison.

The result is a far smoother video, that more accurately depicts exactly what Aldrin saw the Eagle landed.

Unfortunately, Neil Armstrong’s view of the moon as he navigated over the rocky terrain to find a suitable spot was not recorded.

NASA released the video for the 50th anniversary of the launch of Apollo 11 yesterday. 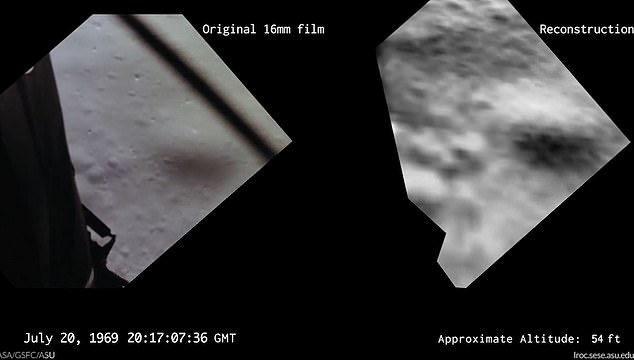 The original footage, taken from the right hand side window, is from a 16mm time-lapse at just six frames per second, leading to a rather jerky picture 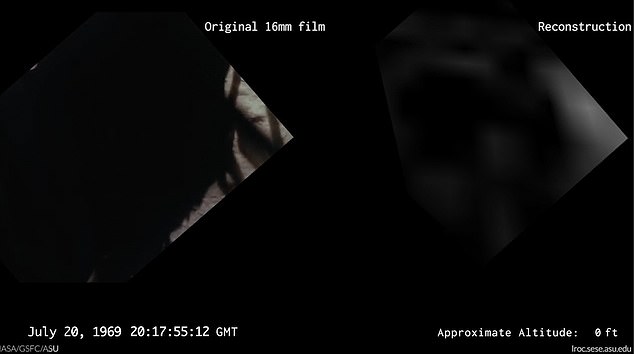 A team stitched together newer, higher quality photos of the moon based on landmark navigation and altitude call outs from a voice recording as they landed to the create the footage